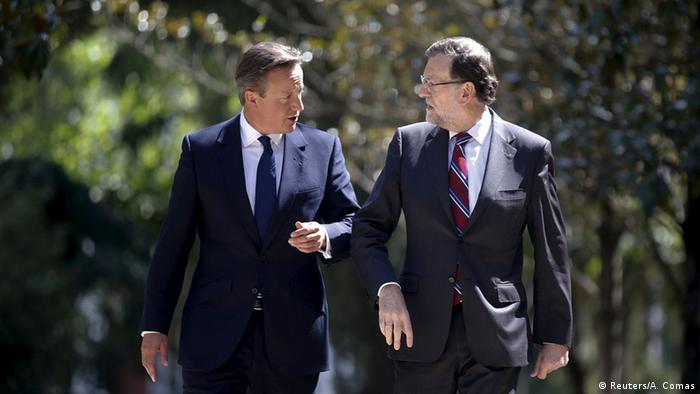 "Sixty million pounds of this additional funding will go to help Syrians still in Syria. The rest will go to neighboring countries, to Turkey, Jordan and Lebanon, where Syrian refugees now account for one quarter of the population," Cameron said.

In providing resettlement for Syrian refugees, Britain will continue to take them directly from Syrian refugee camps, the British prime minister said.

"This provides them with a more direct and safe route to the United Kingdom, rather than risking the hazardous journey which has tragically cost so many lives," he told reporters, adding that the British government would announce further details next week.

At the press conference, he reiterated Britain's stance on mandatory distribution quotas for refugees in the EU: Since the UK is not part of the Schengen zone, it would not participate in any quota distribution system.

Spanish Prime Minister Mariano Rajoy said the refugee crisis was "the most important challenge facing the EU." At the joint press conference with Cameron, he called for a "European-wide approach."

"Spain will not refuse the right to asylum to those entitled to it," he said. However, he would not commit Spain to taking more than the 2,739 refugees it has pledged to accept. His position was criticized by opposition politicians.

More than 1,000 refugees stranded at Budapest's train station have begun walking towards Austria as hundreds also escaped a camp near Serbia. Hungary and EU leaders have traded strong words over handling the crisis. (04.09.2015)

West and East Germans tend to view the flood of refugees currently pouring into the country differently. East Germans, a survey shows, tend to be more anxious. (04.09.2015)

British PM David Cameron has said the UK will provide settlement for "thousands more" Syrian refugees. The pledge stretches only to Syrians currently in UN-sponsored refugee camps, however. (04.09.2015)

France awards Legion of Honor to slain schoolteacher 11m ago