Large parts of Cambodia have had to endure hours of daily power outages after the country's main provider said it was unable to meet demand due to dry weather. Small businesses are suffering the most. 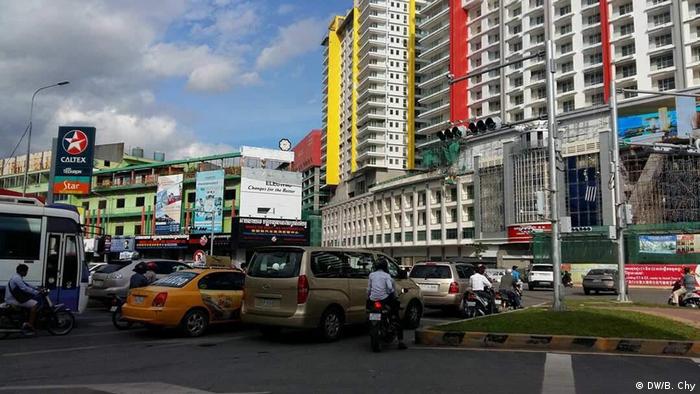 It's hot and humid in KT Beauty, a salon owned by Morn Sokunthea. The red-and-black chairs are empty. The fans don't work and neither do the lights. Thirty eight-year-old Sokunthea hasn't seen a single customer today, and she doesn't expect that to change soon.

"Without electricity I can't even blow-dry hair after washing it," she says. "Doing make-up doesn't work either because with this heat, and without a fan, my customers will get sweaty and the make-up will slide off."

Sokunthea is one of the many small business owners in Cambodia's capital, Phnom Penh, who have experienced the impact of an ongoing electricity crisis. For nearly a month, Cambodia's electricity supplier, Electricite Du Cambodge (EDC), has stopped supplying power to large parts of the country, saying it was unable to meet the high demand.

Read more: How Cambodia is turning its youth into entrepreneurs

For many people in the capital, this means that they sometimes have to go without power for up to five hours every day.

The government has blamed El Nino, a weather phenomenon that brings hot and dry weather to parts of Southeast Asia. As a result, Cambodia's hydroelectric power stations have not been able to generate enough electricity. The blackouts may continue until the end of May, when the start of the rainy season is expected. 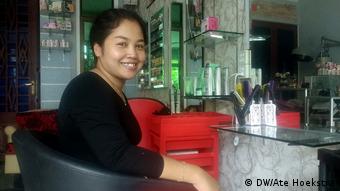 Sokunthea at her salon in a Phnom Penh suburb

Sitting in her beauty salon, Sokunthea tries to stay patient, but the blackouts are frustrating her.

Cambodia's electricity consumption has increased significantly over the past decades. In 2005, the per capita consumption of electricity was 66 kilowatt-hours (kWh), which went up to 400 kWh in 2015. In 2016, the Asian Development Bank (ADB) forecast that by 2020, annual power usage would grow by 9.4%.

Read more: The Cambodian tightrope between growth and conservation

At the same time, more and more Cambodians are being connected to the electricity grid. Last year, almost 90% of the country's population had access to at least four hours of electricity per day. And every month, new apartment buildings, stores and hotels are being built, and all of them need electricity.

Meanwhile, the Cambodian government has said it will buy more electricity from Thailand and Laos. Officials also made a deal with Turkey to bring in a 200-megawatt power ship, but the agreement was cancelled after it became clear that the vessel would take too long to reach Cambodia, the Khmer Times reported.

The economic impact of regular power cuts could be huge. Small business owners like Sokunthea are seeing their incomes decrease. Large businesses, such as the hundreds of garment factories in and around Phnom Penh, may have the means to buy expensive generators, but using them will increase their expenses.

San Chey, the Cambodia director of the Affiliated Network for Social Accountability, an organization that aims to improve local governance, told DW that the blackouts will seriously affect small businesses. "Customers will leave a cafe, or not even go there, when the electricity is cut," said Chey.

The electricity shortage has also renewed the debate on hydroelectric power, currently the source of more than 42% of Cambodia's electricity. The government wants to build more hydroelectric dams, but these are highly controversial. Environmental experts say the dams damage Cambodia's ecosystem.

Chey believes hydropower isn't the solution, but if no action is taken, the electricity shortages will continue.

"Solar power would be much more helpful. We want the government to invest in this rather than creating a new hydropower dam that may affect the environment and lead to more deforestation." 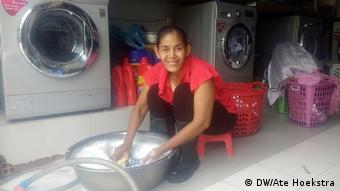 Moung San washing clothes by hand at her laundry service

Meanwhile, Sokunthea's neighbor, Moung San, is washing clothes by hand. She owns a laundry shop with four washing machines, but without power, the machines sit still.

"I'm so exhausted," she says with a sigh. "It takes me a lot more time to get my work done nowadays. Normally I finish around in the evening. Now, I'm often not finished before midnight."

Like Moung, Sokunthea is frustrated. She has been running her beauty salon for the last 10 years, and in all that time, the blackouts have never been this bad. But she admits that she doesn't have many options.

"If there's no power, the only thing that I can do is wait until it comes back."

As investment in hydropower and construction projects ramp up, ecosystems and communities along Southeast Asia's longest river are paying the price. (21.08.2018)

Cambodia has recently reopened the final stretch of a railway running from the capital Phnom Penh to the border with Thailand. New railway lines in the region are expected to give a fillip to economic activity. (27.08.2018)

Decades after war and conflict ravaged Cambodia, it is still reeling from millions of landmines. They continue to kill civilians and even de-miners. Nic Dunlop reports from one of the world's largest minefields. (30.08.2018)