A court has commuted the death sentence against the spiritual leader of Egypt’s Muslim Brotherhood. In this case, Mohammed Badie will get life in prison, but he has also been sentenced to death in another trial. 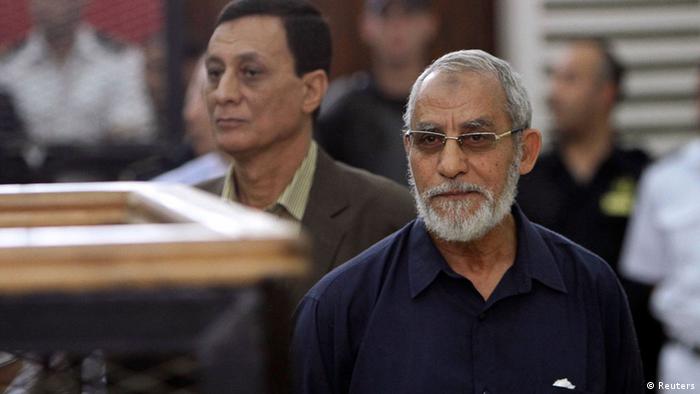 On Saturday, the court that had initially given Muslim Brotherhood Supreme Guide Mohammed Badie one of his two death sentences reduced that to life in prison after consulting the government's Islamic law expert. According to judicial sources, Egypt's mufti objected to the death sentences on the grounds that the only direct evidence against the men came from the unsupported testimony of a secret police officer.

Though it spares Badie the death penalty on those charges, he is still condemned on charges of helping to incite riots in August 2013, almost a month after Egypt's army toppled the country's first democratically elected president, the Islamist Mohammed Morsi. Badie may appeal.

In July, he was sentenced to life for his involvement in violence at protests last July. Germany has spoken out against Egypt's human rights record during the protests and the crackdowns.

The Cairo court sentenced seven other Brotherhood leaders to life in prison, and six who were not present to death. Those sentenced to execution in absentia have the right to retrial if they surrender themselves.

The government that took over after the army overthrew Morsi cracked down on dissent, with at least 700 of the former president's supporters killed in clashes with police on a single day last August. The regime has also imprisoned thousands, the former president among them; the courts have sentenced more than 200 people to death.

With much of its leadership behind bars or in exile, the Muslim Brotherhood has persisted in organizing small and sometimes violent protests across the country. The government has designated the group, once Egypt's largest political movement, as a terrorist organization, blaming it for attacks that have killed scores of policemen and soldiers.

Members of the Brotherhood deny involvement in the attacks. An al Qaeda-inspired group based in the Sinai peninsula has since claied the worst of them.