A court in Egypt has sentenced Muslim Brotherhood leader, Mohammed Badie, and 36 other members to life in prison. Death sentences have been confirmed for ten others. 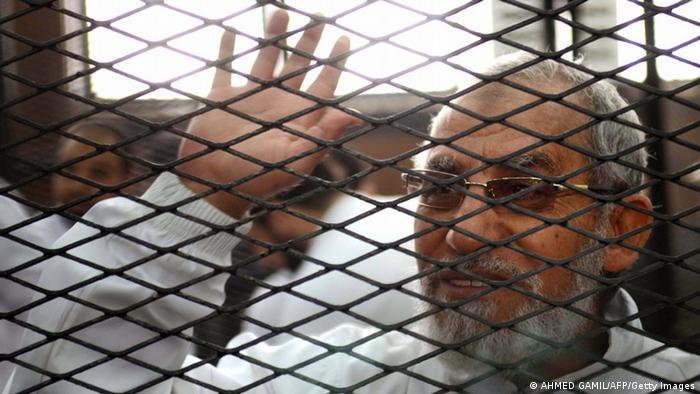 On Saturday the criminal court in the northern city of Qualiubia convicted Badie and numerous others of involvement in deadly protests. This carries a life sentence.

Judge Hassan Farid said the defendants, including Badie, were involved in violence and murder during the protests which occurred last July after the army overthrew president Mohammed Morsi. An underage defendant was also given three years in prison.

The judge said the convicts committed the violence "to achieve terrorist goals." All 37 defendants were also charged with blocking a major road near Cairo during the protests which followed the coup on July 3, 2013.

The court also confirmed the death sentence of Mohammed Abdel-Maqsoud, a Salafi preacher, in absentia. Abdel-Maqsoud fled to Qatar after Morsi was overthrown.

The Egyptian government designated the Muslim Brotherhood as a terrorist organization in December. It was fighting on behalf of former president Morsi, who was a member.

This conviction of Badie comes on top of two death sentences which were previously levied against him following last year's coup.

International and human rights organizations have expressed concern over the recent spate of over 200 death sentences in several mass trials. An Amnesty International report issued on Thursday said that at least 16,000 people have been detained during the past year, and that 80 people have died in detention.

Germany has summoned the Egyptian ambassador after a court sentenced hundreds to death this week. Amid protests on Monday, a judge in Minya condemned Muslim Brotherhood leader Mohammed Badie and hundreds of others. (29.04.2014)

An Egyptian court has recommended a death sentence for 683 alleged Islamists. Among them is the leader of former President Mohamed Morsi’s Muslim Brotherhood. (28.04.2014)

A court has sentenced supporters of Egypt's ousted Islamist president to up to 88 years in prison each. Charges include violating a protest law and assaulting police. (26.04.2014)