An Egyptian court has recommended a death sentence for 683 alleged Islamists. Among them is the leader of former President Mohamed Morsi’s Muslim Brotherhood. 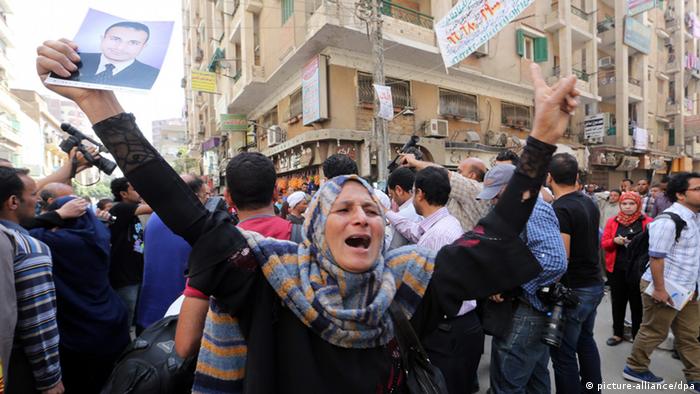 The court in the southern town of Minya recommended that Mohamed Badie and 682 others be put to death after finding them guilty of involvement in the murder and attempted murder of policemen on a day last August, when security forces moved in to break up sit-ins by supporters of former President Morsi. Hundreds of people were killed in the resulting clashes. The defendants had been found guilty of having attempted to storm a police station in the city of Al-Idwa and killing a police officer.

One of the defense lawyers, Ahmed Haefni, told reporters outside of the court that the sentences still needed to be approved by the country's top Islamic official before any executions could be carried out. This is generally regarded as a formality.

In a separate case, the court also commuted 492 of 529 death sentences it had handed down back March to life in prison. The death sentences were upheld for the other 37.

The sentences in both cases may be appealed to a higher court.

The biggest criminal trials in Egypt's modern history have stoked fears among human rights groups that the military-backed government, which was installed after the army toppled President Morsi last July, are seeking to stamp out dissent.#

The US said the Monday's verdict "defies even the most basic standards of international justice," according to a White House statement.

UN Secretary General Ban Ki-moon was "alarmed" by the ruling, his spokesman said.

"Verdicts that clearly appear not to meet basic fair trial standards, particularly those which impose the death penalty, are likely to undermine prospects for long-term stability," Ban said, according to spokesman Stephane Dujarric.

Egyptians are to go to the polls on May 26 and 27 to elect a new president. The country's former army chief, link:17522522:Abdel Fattah al-Sissi# and a left-of-center former parliamentararian, Hamdeen Sabahi, are the only two candidates.

A court has sentenced supporters of Egypt's ousted Islamist president to up to 88 years in prison each. Charges include violating a protest law and assaulting police. (26.04.2014)

Legal sources in Egypt say a court in Cairo has jailed at least 119 members of the Muslim Brotherhood. The group was convicted in relation to violence after the overthrow of Mohammed Morsi. (16.04.2014)

Egypt’s army chief Abdel Fattah el-Sisi has tendered his resignation. In a television address he announced his intention to run for the presidency. (26.03.2014)