A court has sentenced supporters of Egypt's ousted Islamist president to up to 88 years in prison each. Charges include violating a protest law and assaulting police. 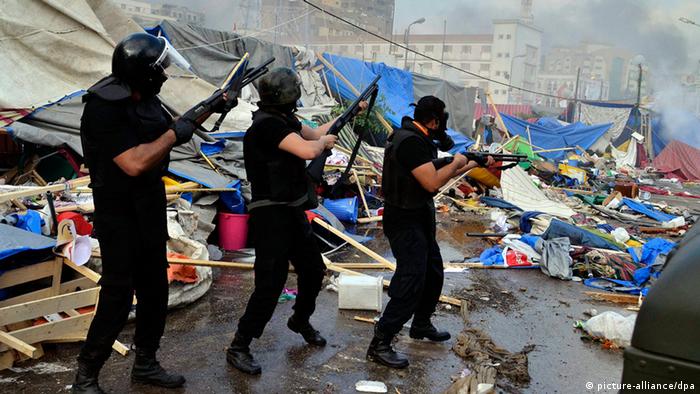 On Saturday, the court sentenced five of the dozen defendants in absentia, passing out terms of five to 88 years for "rioting, sabotage and public order offenses" during protests against a crackdown on supporters of former President Mohammed Morsi in Cairo on August 14 (pictured). The defendants may appeal.

The ruling triggered more condemnation from abroad, as it came only weeks after similar rulings . According to the rights group Amnesty International, crackdowns have led to the deaths of more than 1,400 Morsi supporters and the arrests of 15,000 since the army ousted him July 3.

Hundreds rallied in front of the presidential palace Saturday, demanding the interim president abolish a disputed protest law used extensively over the past months to jail and prosecute activists, including leading figures of the 2011 uprising that toppled longtime autocrat Hosni Mubarak. Issued in November, the law bans all political gatherings and protests without prior permission from police.

Authorities have punished violators of the law with heavy fines or jail time. Rights groups have sharply criticized the law.

While marching toward the palace Saturday, some of the protesters chanted "Freedom" and "Abolish the law - get them out of prison."

Others carried pictures of jailed activists. A few in the crowd tore down posters for the former military chief Abdel-Fattah el-Sissi, now the front-runner in next month's presidential elections.

El-Sissi became popular among many Egyptians when he led Morsi's removal from power. However, harsh measures adopted by the military-backed government since then - including the jailing of several prominent activists - have opened a rift with a small segment of the secular-minded opposition.