Germany's Bundeswehr to help German states after US pullout

With the US moving troops out of Germany, Defense Minister Kramp-Karrenbauer said she would look into how the German military could help affected states. The pullout stems from a spat between Washington and Berlin. 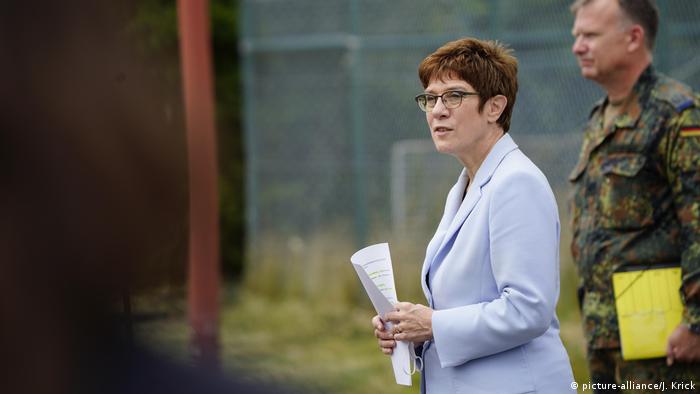 Germany should do more for its own security, Defense Minister Annagret Kramp-Karrenbauer said as the US plans to drastically cut its troops presence in the European country.

"We are bearing the EU and German interests in mind," Kramp-Karrenbauer said on Friday. "It is also true that the good life in Germany and Europe is getting increasingly dependent on how we ensure our security ourselves."

Earlier this week, the US sketched out a plan to move close to 11,900 troops, or nearly one-third of its total contingent in Germany, out of the country. The move was done on the orders of President Donald Trump, who on Wednesday said the US was pulling out because Germany "was not paying their bills" on defense, alluding to Berlin's failure to meet NATO's guidelines on military spending.

While NATO asks its members to invest 2% of their GDP into defense, Germany's military spending was around 1.38% GDP last year. Trump described Germany as "delinquent."

NATO statistics show that in 2019 of the 28 alliance members, only the US, Greece, Estonia, the UK, Romania, Poland and Lativa spent over 2% of GDP on defense expenditures.

German officials criticize the US troop cut and Trump's tone. In addition to security concerns, the pullout is expected to hit the economy of the towns where the troops are stationed, as many Germans work as civilian staff and contractors for the US troops and rely on American soldiers as customers for their businesses.

Bundeswehr to the rescue?

On Friday, Defense Minister Annagret Kramp-Karrenbauer said she would hold talks after the summer break with the leaders of the affected German states to discuss "how the Bundeswehr can support the affected regions." She described the US pullout as "regrettable." It was not immediately clear how the German military would attempt to fill the gap left behind by the US departures.

German lawmaker and senior defense official Thomas Silberhorn told DW that the US troops had "a magnificent job in Germany and Europe" in previous decades.

Germany was concerned "not exclusively of a withdrawal of troops, but about the reasoning," Silberhorn told DW Washington correspondent Ines Pohl.

Silberhorn said, "We understand the argument, the Europeans and in particular the Germans, should do more for security in Europe. But we already do a lot."

Berlin must "continue a trustful dialogue at a higher level" with Washington, he added.

Germany, France raise idea of Kabul evacuations beyond August 31 deadline — as it happened 23.08.2021

Germany and other NATO countries are in talks to keep Kabul airport open for evacuations beyond the date set for the US pullout. DW has the latest.

State secretary at the German Defense Ministry Thomas Silberhorn told DW that NATO has done a "brilliant job" in preparing Afghan forces to secure the country by themselves.