Matchday 23 ended with a match that will be best remembered for a stay-away protest by some of Frankfurt's hard-core supporters. With the home fans focused on making a point, it was Union Berlin who took all three. 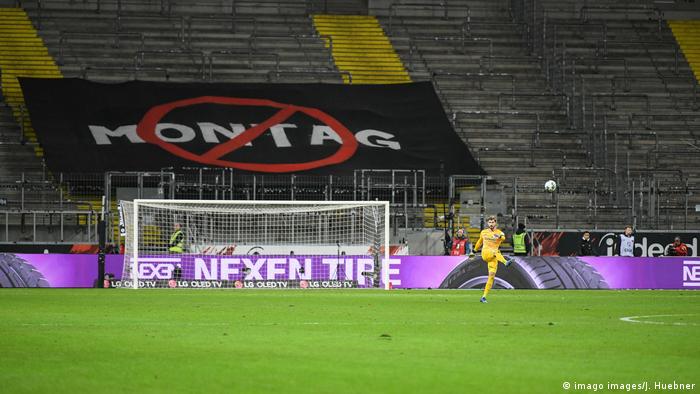 There have been a number of protests against Monday matches organized by the hard-core fans in the Bundesliga. One of the more memorable came in Frankfurt just over two years ago, when thousands of tennis balls were thrown onto the pitch at the start of the second half against RB Leipzig, causing a delay of several minutes.

Two years on, they took a completely different approach this Monday night, with the stand at the end where some of the hard-core supporters would usually sing and chant from start to finish remaining empty. There was nothing but a large banner in the middle with the word Montag (Monday) crossed out. You can't make your point much clearer than that.

It must have been a strange feeling for Eintracht's Kevin Trapp, as he took his place in goal for the first half with none of those supporters behind him in the lower tier of the Nordwestkurve - and little could he have known what an unpleasant day at the office this would turn out to be. What he saw in front of him for the first 45 minutes was a largely uneventful battle, with both sides limited to half chances.

During the break, former Eintracht captain Marco Russ, who is still recovering from an Achilles injury, expressed understanding for the fans' position, but he also said it meant his teammates were lacking the boost Frankfurt normally take from their home support. 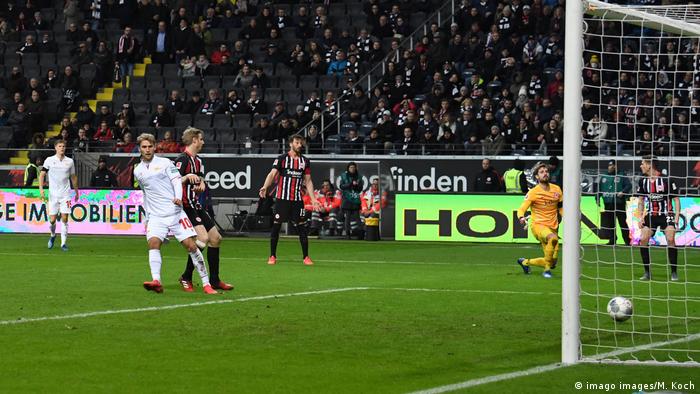 "The fans have every right to express their displeasure about something that bothers them, no question," he told broadcaster DAZN. "But it also takes a bit away from us in terms of energy."

Still, Russ promised that his team would pick things up in the second half - and they did, though not right away.

That this was to be Union's night, first became apparent in the 49th minute, when Christopher Lenz attempted a pass that David Abraham partially intercepted on the edge of the area. Neither Abraham nor Erik Durm dealt with the loose ball, allowing Lenz to run onto what was effectively his own pass before squaring to Sebastian Andersson for the easy tap in.

Just under 20 minutes later, the visitors added another, as the usually solid Trapp failed to parry a cross clear of danger. Andersson and N'Dicka scrapped for the loose ball, but it was the Eintracht defender who got the decisive touch to double Union's lead.

Coming to life - too late

It was only after going down by two that Frankfurt, now playing towards the empty stand, really turned things on as minutes later Goncalo Pacienca forced a sharp save out of Giekiwicz. In the 79th minute, Frankfurt were rewarded for their efforts, which at first glance looked like it had come courtesy of a neat back heel by substitute Andre Silva. However, this time it was Florian Hübner credited for an own goal.

It was a moment that normally would have brought a roar of support from those hard-core fans behind Giekiwicz's goal to spur their team towards a comeback. Instead, it would turn out to be nothing but a consolation marker for the home side.

The away win sees Union move to 10th in the standings, overtaking Frankfurt, whose hopes of qualifying for Europe next season are gradually slipping away.

However, they still have this season, and coach Adi Hütter will be expecting to see a completely different performance on Thursday, when Frankfurt take a 4-1 advantage into the second leg of their round-of-32 tie with Salzburg in the Europa League.

It's shaping up to be one of the closest title races in years, with Bayern Munich, RB Leipzig and Borussia Dortmund all winning. There were also some heavy home defeats, with Hertha Berlin slipping into crisis mode. (23.02.2020)