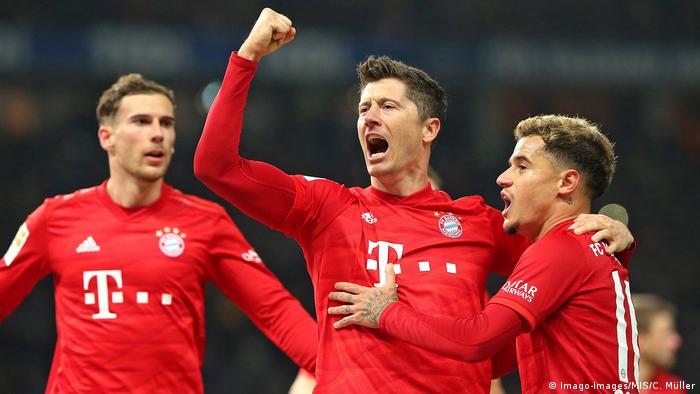 — Lewandowski not ready to relinquish crown to Haaland

The new kid in town has been making all the headlines recently, but Robert Lewandowski served up a reminder to Erling Haaland that he's still the main man with a vital brace as Bayern Munich struggled to put away Paderborn on Friday night. This, despite the heroics of Paderborn's goalkeeper Leopold Zingerle, who almost denied his former club a vital win. Lewandowski's 88th minute winner was his 25th goal of the season, three more than he got in the whole of last season in 10 games less. The Polish striker's tally has come at a ratio better than a goal every 82 minutes. But after Haaland scored Dortmund's second in a comfortable 2-0 win over Werder Bremen, he's now scoring at a rate of one every 44 minutes. That was Bremen's 11th defeat in 13 in the league — they're sinking like a stone.

RB Leipzig are flying at the moment, and followed up their impressive win at Tottenham in the Champions League with a 5-0 demolition job at Schalke. It was a game that saw Cristopher Nkunku pick up four assists in the second half, the first time a player has achieved that feat, and one in which Timo Werner ended his mini goal drought, rifling in after four league games without one. Despite that barren spell, Werner's figures are comparable to Lewandowski and Haaland's this season, with a goal every 93 minutes in the Bundesliga. This was an accomplished display by Julian Nagelsmann's side, who will take some beating in this form. 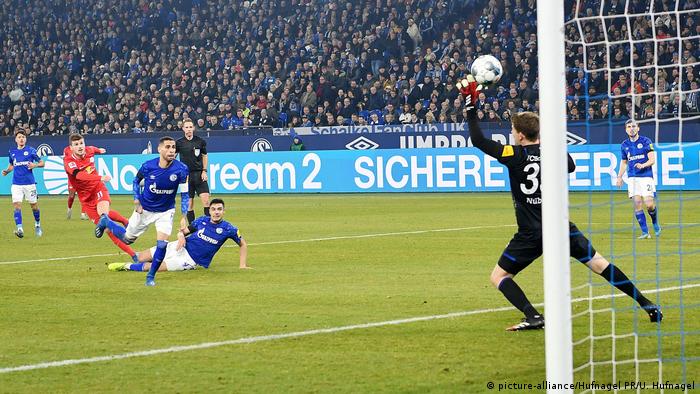 Timo Werner was on target in the Bundesliga for the first time since mid-January.

Hertha Berlin are in danger of becoming the richest club in the second division after a catastrophic 5-0 home loss to resurgent Cologne. Despite significant investment in the playing squad, the Berliners are only six points clear of relegation and haven't won at home in 2020. Fortuna Düsseldorf (16th) and Werder Bremen (17th) are up next. Time to try that new coach bounce? It certainly worked for their opponents. Cologne, under the guidance of Markus Gisdol since November, leapfrogged Hertha, have now won six of their last eight and a red-hot striker in the shape of Jhon Cordoba.

Leverkusen have won all but one game since the winter break and are making sure they remain in the conversation at the top of the table. Moussa Diaby and Nadiem Amiri got the goals in a 2-0 win against visiting Augsburg on Sunday to ensure the Werkself head to Leipzig next weekend in fine form. Things aren't going so smoothly for Borussia Mönchengladbach though, with Hoffenheim equalizing in the second minute of stoppage time at Borussia-Park. That came after a missed penalty by Alassane Plea and VAR ruling out what would have been a second Gladbach goal. Plea's effort was harshly ruled out for a handball in the build-up. Victory for Gladbach would have seen Marco Rose's side stay third, ahead of Dortmund. 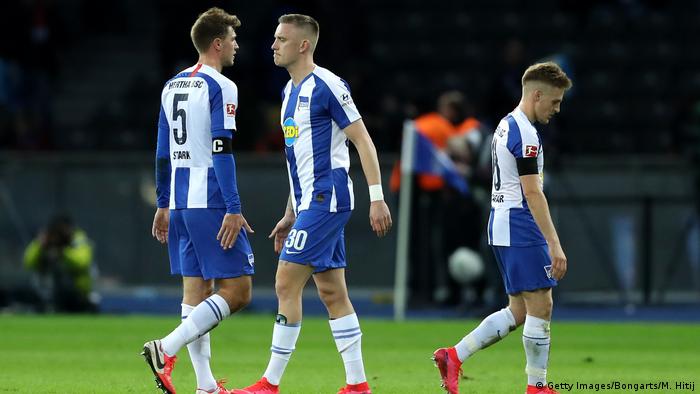 Hertha's players are despondent after a 5-0 humbling at home to Cologne.

"It shows we have the balls [to play that way]. We played brilliantly."
Paderborn's Dennis Srbeny after the unlucky loss to Bayern

"It wasn't sexy, but it was successful."
Fortuna Düsseldorf's head coach Uwe Rösler after the win against Freiburg

"Everyone was celebrating carnival and looking at the game on the screen now and again. We wanted to make sure they could keep partying."
Markus Gisdol after the club's five-goal win in Berlin

"What I said is explicit, but what should I do with these people?"
Max Eberl after going into the stand to convince fans to take down their banner of Hoffenheim owner Dietmar Hopp in crosshairs.

"I said, if the banner doesn't disappear then we're going home.They can have the three points."
Hoffenheim head coach Alfred Schreuder on the banner

— Erling Haaland becomes the first player in Bundesliga history to score at least nine goals in his first six appearances.

— Jadon Sancho has 14 assists in the Bundesliga, matching his record from last season.

— RB Leipzig's Cristopher Nkunku picked up four assists in the second half against Schalke.

— Cologne's three goals in the first half in Berlin marked the first time they've scored three in one half since December 2017.

— Lucien Favre fielded the same Dortmund side for a third consecutive game, for the first time in his Dortmund tenure.

— A minute's silence was held at every Bundesliga stadium this weekend to honor the victims of the terrorist attack in Hanau.

— The minute's silence in Gladbach was overshadowed by the raising of a banner of Hoffenheim owner Dietmar Hopp's face in crosshairs. More on that here.

— Bayern Munich have released a statement explaining there was a tragic fatality during the game against Paderborn.
A 14-month-old girl collapsed and after resuscitation attempts was taken to hospital where she tragically died. The girl was the niece of Paderborn player Streli Mamba.

— Finally, to wrap up the matchday, some of Eintracht Frankfurt's hard-core supporters made their disapproval of Monday night kickoffs clear by leaving the who Nordwestkurve completely empty - on a night that Union Berlin would head back to the capital with all three points.