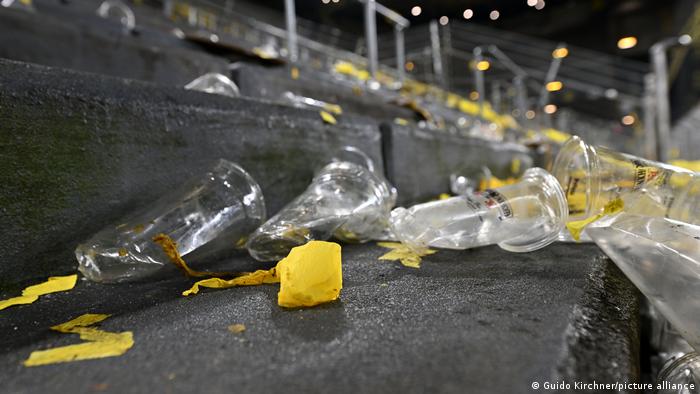 Matches in Germany's top two football divisions produce a lot of rubbish. But this is set to change

When the balls roll in the Bundesliga on any given weekend, tens of thousands of fans crisscross Germany on their way to the stadium — the majority by car. This often causes kilometrer-long traffic jams in near the stadium, contributing to air and noise pollution.

Before the season, teams get in shape at training camps abroad — accompanied by an entourage of fans, sponsors and media representatives. And then there is the bratwurst, or sausage, an essential part of any stadium visit which leads to the mass use of disposable tableware. These are just a few examples of the climate-damaging impacts associated with professional football.

In the future, the German Football League's 36 teams intend to be better positioned and start meeting ecological, economic and social sustainability targets. From the 2023-24 season, criteria imposed will become a mandatory part of the licensing procedure.

She is the founder and managing director of the German non-governmental organization IMPCT, which helped develop the sustainability standards for the German Football League (DFL), which operates the Bundesliga and Bundesliga 2. These are divided into two categories, the first of which will come into effect at the start of the 2023-24 campaign.

They include the minimum requirements of providing proof of a sustainability strategy, an environmental strategy and a code of conduct. The clubs will seek to actively measure their carbon footprint, and manage the pitch and the club's own buildings sustainably in the long term.

In times of an energy crisis, those measures include controlling the use of energy, water and heating output, introducing "smart" lighting and fertilizing the pitch in a sustainable manner. In the future, the movement of fans pre- and post-match will be analyzed and optimized, while there are also plans in place to develop a food concept for sustainable nutrition.

"The decisive thing now is implementation, which will take place in individual steps as we sharpen the criteria and set them in stone," explained Ferkau. It is an immense challenge to shift an organization such as the DFL toward sustainability, given the billions of euros in turnover and the different shareholders and stakeholders it represents.

"Depending on the maturity of sustainability in the respective clubs, the criteria tend to be easier or more difficult to meet. But they are feasible for all," she said.

Some criteria could have been stricter, but you must make sure they are also feasible for a club promoted to the third division, Ferkau added.

Some clubs are already very far along on the issue, others not so much. The clubs will be given an additional year's time to fulfil some of the criteria. However, if they do not implement the criteria, they will not have to fear any penalties — so the license, or permit, to compete in the Bundesliga won't really be at risk, a point that former DFL managing director Andreas Rettig recently criticized on German public broadcaster Deutschlandfunk.

"I would have liked to see a different standard. I'm reminded of the introduction of the youth development centers in 2006, when we used a sharp sword," said Rettig. "We said: if you don't invest in young talent and meet the criteria, you don't get a license. That's completely missing here."

Ferkau, on the other hand, argued that the clubs are "committed" by the change in the statutes and are therefore obliged to act.

"The clubs' self-motivation is high right now, because stakeholders are demanding more sustainability anyway. The pressure here has increased massively in the last 18 months. On top of that, the issue of sanction versus reward is still being discussed," she said. 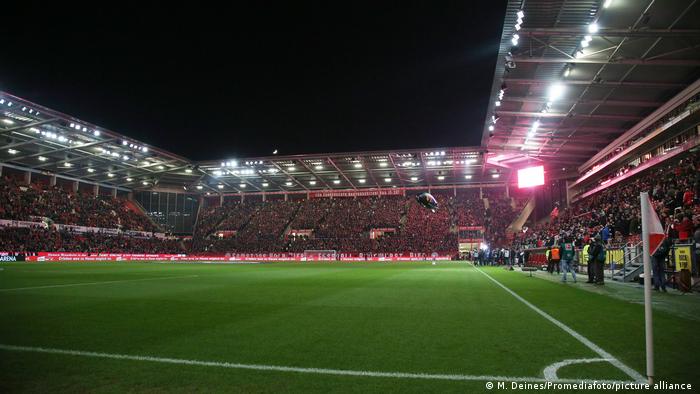 Ferkau also claimed that what the DFL is doing is unique.

"To my knowledge, no other league has developed its own sustainability standard. For this, the DFL deserves praise for the clarity of its approach," she said.

She added that German professional football already was already pioneering in specific aspects of sustainability, such as the ecological alignment of a stadium, waste management, merchandising or social commitment.

Mainz see themselves as one of these pioneers.

"The principles of sustainability, resource conservation and energy saving have been firmly anchored at Mainz since 2010. Since 2010, we have been the first climate-neutral club in the Bundesliga, and we have been earning this status every year since then," Tobias Rinauer of Mainz's media relations department told DW. He shares the tasks in the sustainability area with a colleague.

Since 2016, the lighting in the stadium including the floodlighsts — has been converted to an LED system and a heat meter has been installed for the turf heating system.

"Sustainability in all its facets has been part of Mainz DNA for a long time and has thus always been very high on the agenda," Rinauer said.

Cologne are the first Bundesliga club to boast a national authority certificate for sustainable corporate management. RB Leipzig have already unveiled their sustainability plans, and second-division club St. Pauli produces "the most sustainable team sports apparel in the world," according to its own statement.

All these measures also stand to benefit the clubs during the current energy crisis," Ferkau said.

"For [some] clubs, [partial] energy self-sufficiency is paying off right now. Those who switched to renewable energy years ago are now reaping the rewards."

After more than two years of pandemic-related restrictions, people are eager to get back to traveling. Let us show you how to satisfy your wanderlust, yet keep your carbon footprint small.