Saturday's match between Frankfurt and Dortmund was one fans of both teams had been looking forward to for weeks. Despite the 1-1 scoreline, the contest between two of the Bundesliga’s top offenses didn’t disappoint. 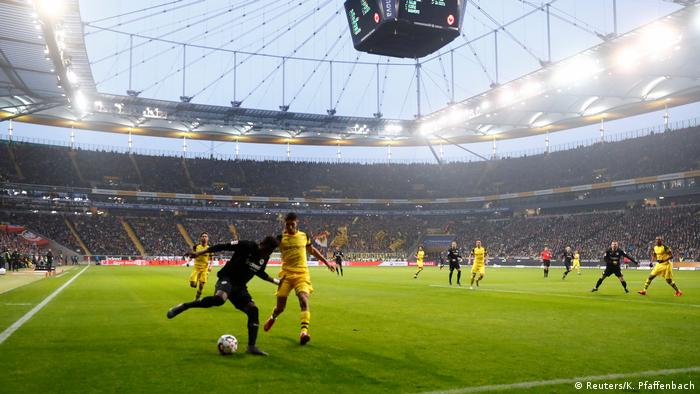 Expectations were high for the clash of two of this season’s most pleasant surprises. Would these two offensive-minded teams really go for it? Or would Adi Hütter and Lucien Favre have too much respect for each other's potent attacks and try to inhibit their teams' instincts to open up and go forward?

The answer came early, as both teams went for it from the get go. Frankfurt came out flying in the first five minutes, with their "magic triangle" of Luka Jovic, Ante Rebic and Sebastian Haller giving the BVB defenders and Roman Bürki behind them all kinds of headaches. The hosts' right midfielder Danny Da Costa had the first real chance of the game but he didn’t hit it quite right and Bürki saved easily.

"Maybe Danny should have put that one away," the captain for the day, Gelson Fernandes, said afterwards. Da Costa's subpar finish was just one of a number of opportunities the home team had in the early going.

Among them was an effort by the league’s top scorer, Luka Jovic, who fired over the bar after a cutback from the goal line. Despite their pressure, though, Frankfurt failed to capitalize. A touch of nerves perhaps?

Gradually, Dortmund started to get into the game with Jadon Sancho beginning to combine with Marco Reus to ask questions of the Frankfurt midfield and back line. In the 11th minute came a key moment when Fernandes did what he does, breaking up plays, and paid for it with a yellow card – forcing him to hold back for the next 79 minutes.

From then on Dortmund started to take control as Sancho, Reus and others caused more and more problems for the home side. Soon after, in the 22nd minute, Dortmund were rewarded as Raphael Guerreiro broke down the left and played a cross into an open Reus who finished into a gaping net from near the penalty spot.

At this point, Dortmund looked very likely to go on to get a second, which could have decided it before the end of the half. But Frankfurt fought their way back into it and after Rebic saw his header hit the crossbar, a cross came back into the area and Jovic put it away for his 14th of the season in the 35th minute.

After the break, it quickly became clear that the two coaches had used the interval to demand a little more discipline, making for a slightly slower, but still highly entertaining second half.

Both teams created a number of half-decent chances, forcing both Bürki and Frankfurt goalkeeper Kevin Trapp into largely routine saves. Trapp truly did shine just after the hour mark though, saving a close range effort from Paco Alcacer.

Happy with the point

In the end, Frankfurt, having gone into this one as the underdogs, will have taken a few more positives out of this one than Dortmund.

Sebastian Rode, who returned to his former employer on loan from Dortmund during the January transfer window couldn't have been more pleased, even if Frankfurt couldn't get the winner in the end.

"All of us knew, especially me, how strong this Dortmund team is," he said. "We did well, I think the point was well deserved – but Dortmund will also be happy with the point."

Fernandes wasn’t quite as emphatic.

"It's too bad we couldn’t get that second goal, but it (the draw) is okay," he said. 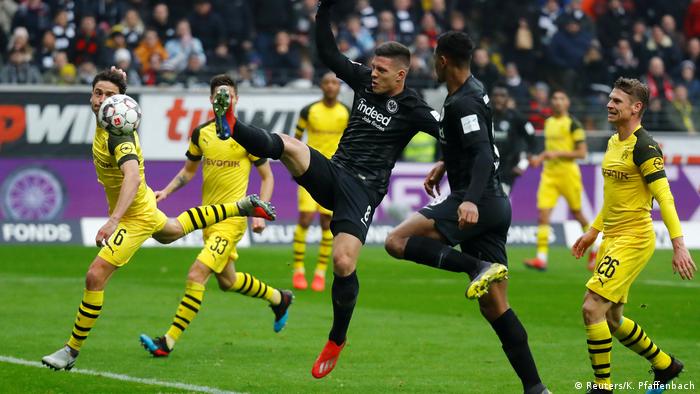 As for Hütter, he was pleased not just with the point, but with how his team played.

"Of course we needed an absolute top performance today, and I am happy with the performance," the Austrian said. "When we play like we played today, we can compete with the top teams in the Bundesliga."

'Good for the Bundesliga'

His counterpart, Favre, agreed that the draw was a fair result, and coming on the road, he wasn"t complaining either. And if he needed any cheering up, there was always the result from Leverkusen – where Bayer Leverkusen beat Bayern Munich 3-1 – allowing Dortmund to open up a seven point lead at the top.

And so are entertaining, if not high-scoring games, between two teams whose coaches have the courage to let them go for it.

Opinion: The Bundesliga has forgotten about Gladbach

With all the attention on Borussia Dortmund and Bayern Munich, the league has neglected the side currently in second. Borussia Mönchengladbach are enjoying a sensational season — but no one is talking about them. (03.02.2019)

A stunning Leon Bailey freekick was the catalyst for Bayer Leverkusen's 3-1 win over Bayern Munich on Saturday. Even more worryingly for the champions, Leverkusen's lineup and attitude showed they weren't at all scared. (02.02.2019)