Jadon Sancho made history in Borussia Dortmund's win over Arminia Bielefeld with his 50th career Bundesliga assist. The Englishman's recent surge couldn't have come at a better time. 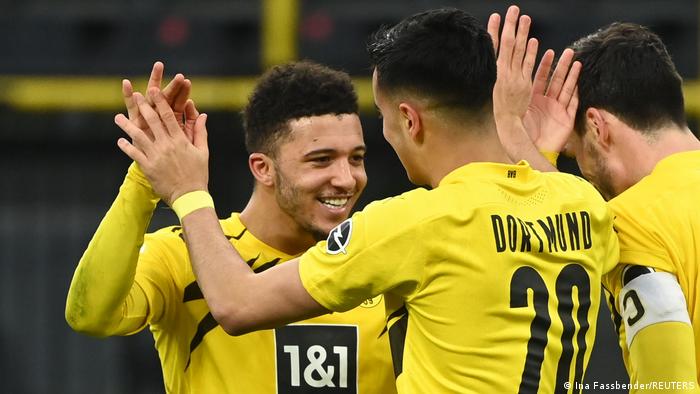 Jadon Sancho was the star of the show as Borussia Dortmund cruised to victory over Arminia Bielefeld on Saturday.

His table-setter for Mahmoud Dahoud's opening goal was his 50th assist in the Bundesliga, making him, at 20 years and 330 days, the youngest-ever to reach that milestone. He added a spot-kick 10 minutes later, and drove the counter-attack that preceded Dortmund's third from Renier.

Sancho's showcase was the latest in a series of strong showings for Dortmund. With Borussia Mönchengladbach in the German Cup and Bayern Munich in the Bundesliga next on the docket, the Englishman's recent rise couldn't have come at a better time.

Is Sancho back at his best?

After an offseason surrounded by speculation that he may return to England, Sancho struggled out of the gates to start the Bundesliga campaign.

Part of it was down to luck, able to get into good positions to score but not being able to convert his chances. A game against Bremen in mid-December was a perfect example of this when he twice received the ball near the penalty spot but failed to find the back of the net.

But there were other ways he failed to dazzle as he did the season before. After 17 goals and 17 assists in the league last season, he entered the Bundesliga's midseason break with five assists and without goal to his name.

Something clicked at the turn of the year. Sancho has six goals and six assists in 10 games in 2021, and Saturday's match against Bielefeld was the second straight contest he has recorded one of each.

He was also stellar for Dortmund in their 3-2 Champions League win over Sevilla earlier this month, which included a spectacular assist to Erling Haaland for the Norwegian striker's first of two goals.

Sancho's assist on Saturday was less majestic, but nonetheless encapsulated his current run of form. The English winger darted with the ball into the left side of the box and, after drawing multiple Bielefeld defenders out of position, shifted the ball to Dahoud. The defensive midfielder was afforded yards of space to smash the ball into the back of the net thanks to the attention Sancho commanded.

More than a star?

In his fourth season with Borussia Dortmund, Sancho has also become a key figure in the dressing room. In the club's 4-0 win over Schalke in last week's Revierderby, Marco Reus gave the Englishman the captain's armband when he was subbed off, a sign of his standing in the squad.

"He has also taken a step forward in his personal development," Sebastian Kehl, a former Dortmund captain and current front office member, told Kicker magazine afterward, adding that Sancho is "highly accepted" in the squad. Sancho's recent form also coincides with Dortmund's renaissance — the win over Bielefeld was Dortmund's third straight in all competitions. Haaland, who has four goals and two assists during that stretch, has justifiably received a lot of the credit, but Sancho also is integral to the recent turnaround under interim coach Edin Terzic.

"He's been working differently for a few weeks, both in training or in the weight room, and you get rewarded for that," Mats Hummels said of Sancho after Saturday's win. "Offensive players have to learn that sometimes. Now he's playing fantastically well and setting the tone."

The England star must continue his upward trajectory for Dortmund to achieve their goals this season. Despite the victory over Bielefeld, Terzic's side still sits outside the top four, though the gap between them and fourth-placed Eintracht Frankfurt has diminished to three points with Frankfurt's slip-up on Friday.

Dortmund also have a legitimate shot at silverware with Bayern no longer in the German Cup, but they have to get past Gladbach, led by their incoming coach Marco Rose, in next Wednesday's quarterfinal.

If Sancho can maintain his resurgence, Dortmund may be able to as well.

Edin Terzic is under pressure after a 2-2 draw with Hoffenheim gave Dortmund five points from six games. Even with Marco Rose on the way, Dortmund's biggest issue is not the man in the dugout, DW's Matt Pearson writes.

Borussia Dortmund threw away a 2-0 lead as Werder Bremen scored three late goals – two of them after 90 minutes – to complete an outrageous comeback. Ex-RB Leipzig forward Oliver Burke was the hero with the winner.