In the final matchday in February, the headlines in the Bundesliga were about what happened off the pitch. On it, Bayern Munich took a huge step towards the title but Borussia Dortmund and Gladbach stayed in the race. 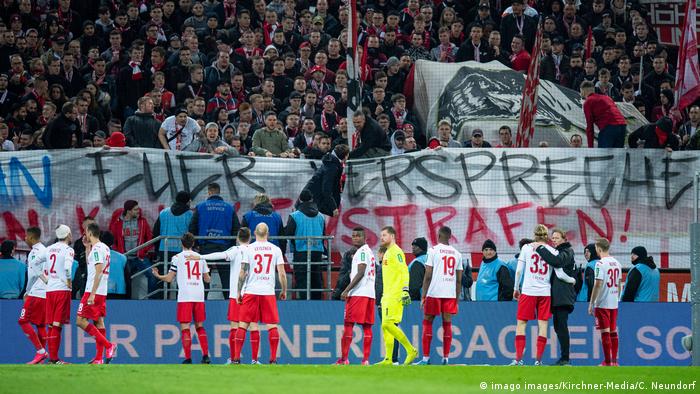 — The entire matchday was dominated by protests against Hoffenheim owner Dietmar Hopp.

— On the pitch, Bayern dominated Hoffenheim. Six goals were scored, including three in the opening quarter of an hour as the visitors ran riot even without Robert Lewandowski. In his place was teenager Joshua Zirkzee, who scored and impressed.

— RB Leipzig missed the chance to keep the pressure up on Bayern after only drawing with Leverkusen. Peter Bosz's side deserved more credit though. They took the lead, thanks to another Kai Havertz assist and although they conceded just minutes later, they were good value for their point. Leverkusen are quietly developing into a more stable side than their approach suggests.

— Gladbach got the win against Augsburg but made life harder for themselves than it needed to be. After a slow first half, five goals followed in the second half. Thankfully for Gladbach, they scored three of them. Lars Stindl proved the matchwinner.

— The same was true of Dortmund's victory at home against Freiburg. Jadon Sancho's 14th goal of the season was enough, but they could have had more. They might also have conceded one or two as Dortmund did their best to throw away the three points. Nevertheless, their ability to win a game thanks to one goal is a sign of returning stability. Three clean sheets in a row in the league is music to Lucien Favre's ears. 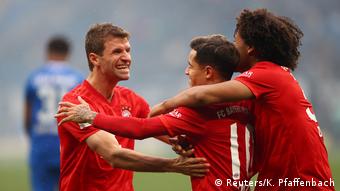 Before the protest, Bayern Munich were playing tidy football

— Carnival might be over in Cologne, but Markus Gisdol keeps giving reasons for the city's football fans to party.Cologne comprehensively dismissed Schalke on Saturday night, and things were so much in their favor that Alexander Nübel even spilled a ball into his own net.

— Just a few days after Jürgen Klinsmann's thoughts on Hertha Berlin were in the media, turbulence continued for the capital club. They swiftly found themselves 2-0 down after 10 minutes against an inspired Fortuna Düsseldorf. By halftime, it was 3-0. But, out of nothing, Hertha scored three goals in 11 second-half minutes to somehow come away with a point. Krzysztof Piatek scored the third from the spot and both sides had the chance to win a six-goal thriller.

— "Today, at the absolute latest, the moment has come when the entire Bundesliga needs to take action against these chaotic people... We must all stand together. We have closed our eyes for far too long. This is the ugly face of football."
Bayern CEO Karl-Heinz Rummenigge on the insults directed towards Dietmar Hopp

— "Ten years ago, Robert Enke was a huge topic. And we pour this kind of malice over a 23-year-old lad who made a mistake."
Schalke's chairman of sport Jochen Schneider about the whistles and calls of Nübel out after the loss in Cologne

— "I would rather we lost like we did today than soil ourselves like we did against Freiburg."
Augsburg's Jeffrey Gouweleeuw after the loss to Gladbach

— "I don't know, I can't remember."
Jadon Sancho when asked if he could remember the last time he didn't score at home in the Bundesliga 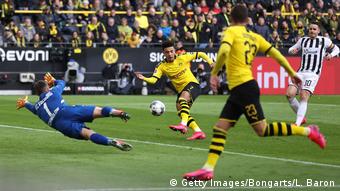 Jadon Sancho scored at home for BVB in the league, again

— "If we weren't a team, then we wouldn't have come back like we did."
Hertha's Maximilian Mittelstädt after the 3-3 draw in Düsseldorf

— Bayern are the first team in Bundesliga history to score minimum 3 goals in 5 consecutive away games.

— Christian Gentner made his 400th Bundesliga appearance on Sunday. Only Claudio Pizarro (486) has more amongst active players.

— Erling Haaland didn't score when he came off the bench for BVB, but Jhon Cordoba did score for Cologne. In 2020, only Haaland has scored more (9) than Cordoba (6).

— 66 goals after 24 games is a new club record for Borussia Dortmund.

German football fan protests were the headline of matchday 24. In Sinsheim and Dortmund banners with abuse against Hopp were held aloft, which in the former resulted in the last 13 minutes being played out in protest. More banners followed in Cologne and in Berlin on Sunday.