Bundesliga Bulletin: Champions League race and relegation to go to the wire

A packed penultimate Bundesliga matchday leaves plenty to play for next weekend — at both ends of the table. Schalke are returning to the Champions League while Hamburg are clinging on by their fingernails. 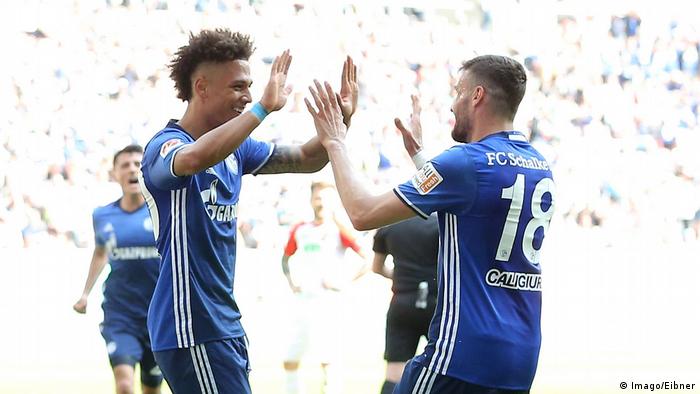 —Schalke will return to the Champions League next season, for the first time since 2014-15, after they eased past Augsburg to seal second place with a game to spare. That season was also the last time they finished above rivals Borussia Dortmund, though the clubs came sixth and seventh that term.

— But beneath the Royal Blues is an almighty scrap for the remaining two Champions League spots. The teams in third, fourth and fifth at the start of the day (Borussia Dortmund, Hoffenheim, Bayer Leverkusen) all failed to win, with only Leverkusen picking up a point. That means any two from those three clubs plus Eintracht Frankfurt and RB Leipzig could make the cut. Borussia Dortmund's trip to Hoffenheim will be the one to watch next Saturday, but it could all get a bit complex.

— Those most in need of points at the bottom end were equally reluctant to take them, with Mainz's shock win over Dortmundthe exception that ensured their safety and set up a last day "Battle of the 'burgs." One of Hamburg, Wolfsburg and Freiburg will join Cologne in the second tier, one will be in the relegation playoff and one will survive. Wolfsburg host Cologne, Freiburg welcome Augsburg and Hamburg are also at home — they face Borussia Mönchengladbach.

— Two men in the running to lead the line for Germany at the upcoming World Cup offered Joachim Löw a timely reminder of their prowess. Mario Gomez bagged a brace as Stuttgart beat Hoffenheim 2-0 with their only two shots on target. The opener was the target man's first strike since mid-March. Timo Werner broke a Bundesliga drought of almost exactly the same length when he grabbed Leipzig's second in a comfortable 4-1 win over Leipzig, while young English talent Ademola Lookman notched twice in the same match.

— Mainz's Ridle Baku has made a flying start to his Bundesliga career. After a goal on debut last week, it took him just four minutes to get on the score sheet as his side beat Dortmund 2-1 in their own back yard. But the 20-year-old still has a bit to learn, he was subbed off by his boss, Sandro Schwarz, early in the second half after picking up a booking, and running the risk of a second.

- After 350 days out, Alex Meier needed just four minutes and two touches to find the back of the net for Eintracht Frankfurt again.

- Niklas Süle's early own goal in Bayern Munich's 3-1 win over Cologne was the third time he's scored past his own keeper in the Bundesliga this season. Only Manfred Kaltz, of Hamburg, has matched that figure, in 1977-78.

"I know goalscorers are selfish. We have spoken and he has understood. When I took him off I didn’t find it funny at all, because I’m the boss and no one else.” Jupp Heynckes lays down the law to Robert Lewandowski after the striker was displeased with his substitution.

"Without passion, heart and aggression you cannot win a Bundesliga game. The game just went really badly for us." Andre Schürrle faces the music after Dortmund's defeat.

"We've just been relegated, and it sounds like we've just won the league." Cologne forward Simon Terrode on his team's fans during their 3-1 loss to Bayern.

"I'd rather we'd scored a goal less against Hoffenheim, Frankfurt or Leipzig and scored instead in the last two games." Leverkusen boss Heiko Herrlich after his side went goalless for the second week running — they had scored four in each of their three games before that.

"The team still retains hope of safety. I am certain that the boys won't give up. Nothing will be decided before our next game." Christian Titz comes out fighting despite Hamburg's survival hopes taking a severe blow.

In a weekend of goodbyes, Roman Weidenfeller's was perhaps the most unusual. The Dortmund veteran was named on the bench and failed to add to his 452 appearances for the club on his last game at Signal Iduna Park. But he did try something new. At the end of the match, Weidenfeller clambered over a metal fence with his boots on and was soon supping on a beer and singing along with the fans. Only in Germany...