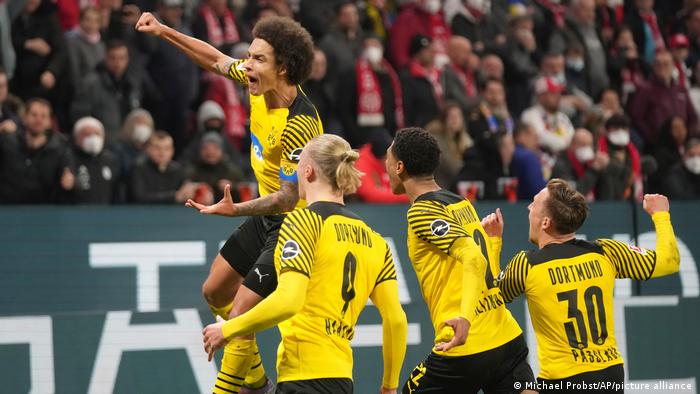 Two wins in the space of four days, only one league defeat this calendar year, an inconsistent Bayern Munich's lead reduced to four points and Erling Haaland returning from injury.

One could perhaps forgive Borussia Dortmund's players, staff and supporters for dreaming of maybe, just maybe, reigniting the Bundesliga title race with nine games to play. But there's no real sign of that.

The euphoria sparked by Axel Witsel's 87th-minute back-post winner right in front of Dortmund's traveling fans in Mainz on Wednesday night was as brief as it was unreflective of the general mood in Dortmund.

Just as in the 1-0 home win over Arminia Bielefeld on Sunday, the Black and Yellows were ponderous and pedestrian in a game of few chances — a far cry from the swashbuckling outfit which put six past Borussia Mönchengladbach, three past Union Berlin and five past Freiburg recently.

"That wasn't a 1-0, that was more like a goalless draw that Dortmund luckily managed to win," said frustrated Mainz coach Bo Svensson at full-time. "They barely had any chances in the entire game and yet somehow still won."

Dortmund midfielder Emre Can agreed: "It was a difficult game and not the prettiest game, but we stood our ground and got the three points. And a late goal makes it even better. The victory tastes good."

But head coach Marco Rose was defiant and insisted that his players deserve more credit.

"Everyone's been talking about the coronavirus problems at Bielefeld and Mainz, but we've also had eight players missing through injury and we've still managed to keep two clean sheets in a row," he said.

"The way the lads are fighting in the current situation, I think they also deserve some praise."

Another summer of change

Rose himself knows why the city of Dortmund is hardly overflowing with enthusiasm at the moment.

Disappointing cup exits against second-division St. Pauli (German Cup) and Rangers (Europa League) have once again left Dortmund facing another trophyless season. They may have reduced Bayern Munich's lead but, despite the Bavarians' own inconsistencies, there's not a great deal of hope that Dortmund can capitalize by winning at the Allianz Arena in April.

And, off the field, the club are once again facing a summer of change — a consequence of a recruitment policy that brings some of Europe's top young talent to the Westfalenstadion, but takes their inevitable departures into account, as well.

"I know that City are after him," said Borussia Dortmund external adviser Matthias Sammer, who himself signed a contract extension with the club this week. "But the numbers ... I almost got whiplash and fell unconscious. My wife had to wake me up. I can't even count that high."

According to the German broadcaster Sport1, winger Thorgan Hazard is also in talks with several English clubs ahead of a potential move, while goalkeeper Roman Bürki will head to the United States in the summer, having lost his No. 1 spot to Gregor Kobel.

Immediately before the first team's game in Mainz, Borussia Dortmund's under-19s were beaten 1-0 in the UEFA Youth League quarterfinal by Atletico Madrid in front of 19,300 fans.

And, despite the German government's earmarking March 20 as the day when most remaining pandemic restrictions will be lifted, sources suggest that Dortmund's hard-core ultras and active fan scene won't be attending Sunday's away game in Cologne after all, prolonging the seemingly endless effects of the pandemic.

All in all, despite Marco Rose's attempts to highlight the positives — "Bundesliga is good, points tally is good, we're in the title race" — a general malaise remains.

And it will take more than 1-0 wins over Bielefeld and Mainz to change that.