'Intensity, aggression and vertical passes': Bo Svensson and Mainz ticking all the boxes

On the day Jürgen Klopp and Thomas Tuchel faced off in the Premier League, the latest product of Mainz's coaching school, Bo Svensson, celebrated another win in the Bundesliga. DW's Matt Ford kept an eye on the Dane. 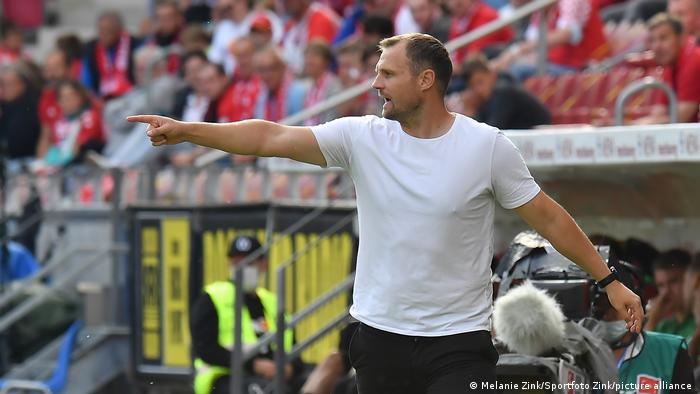 This time, the victorious Mainz players maintained their social distance, telling the fans to stay two meters away as goalscorer Adam Szalai led the celebrations from the fence at the front of the terrace.

After their opening day victory over RB Leipzig in their last home game, the euphoric players had jumped into the stands to celebrate – breaching the German Football League (DFL)'s COVID-19 hygiene concept and earning the club a €15,000 fine.

"We've had better ideas," admitted board member for sport Christian Heidel. Indeed. One of them was hiring Bo Svensson.

The 42-year-old Dane, who returned to Mainz with Heidel in December 2020, took over a team which was second bottom of the Bundesliga at the halfway stage, ten points adrift of automatic safety. Under Svensson, they ended up finishing 12th, the fifth best team in the second half of the season.

They continued where they'd left off against RB, winning despite having 11 first team squad members in quarantine. And although there was a setback away at Bochum last week, the qualities Svensson wants to see from his team were on show again against newly promoted Greuther Fürth.

"Today, we had the necessary aggression and intensity on the pitch, which we were lacking in Bochum," he said after the comfortable 3-0 win. "Those aspects are key to our game."

Svensson himself embodies that intensity on the touchline, coordinating his team's pressing and living every attempt to win possession and then break. When Mainz don't move the ball forward quickly enough, his frustration is clear to see, head shaking and arms flailing.

"Last week in Bochum, we certainly played too many horizontal passes and we suffered as a result," he explained to DW.

"When we play like that, we can't make the most out of our qualities up front. We want to play quick, vertical passes forward like every team – and that worked particularly well today with Adam Szalai up front." 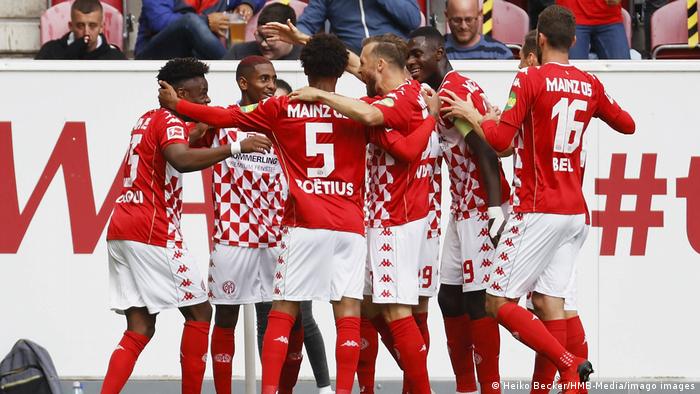 Szalai's goal, Mainz's second, just three minutes after Anderson Lucoqui's opener, was a case in point. After dropping deep to win the ball in midfield, Jonathan Burkardt immediately fed Silvan Widmer with a vertical pass. The Swiss right-back, a new arrival from Basel, crossed accurately for Szalai who steered a striker's finish into the roof of the net. Svensson certainly approved.

Later on, after a Kevin Stöger goal had made it 3-0 in injury time, Szalai was also the man up on the fence, leading the celebrations. Shortly after, before coming to speak to the media, head coach Svensson spent time taking selfies with fans.

Because, along with aggression, intensity and vertical passing, familiarity and community are key aspects of life in Mainz.

Mainz keeping it in the family

"Children of Mainz 05 fans often become Mainz 05 fans themselves," read an ironic warning on an ultras sticker outside the stadium, designed to resemble the health warnings on cigarette packets. And in Mainz, this addiction does seem to run in the family.

Svensson, a former Mainz defender who also coached the club’s U16, U17 and U19 teams, is the latest in a long line of coaches who have followed that internal path. His two more illustrious predecessors, Jürgen Klopp and Thomas Tuchel, have similar CVs, and faced off in the Premier League later on Saturday as Liverpool played Chelsea. Another alumnus, Sandro Schwarz, Mainz coach from 2017 to 2019, is now at Dynamo Moscow.

Club officials are also steeped in Mainz tradition. After an unsuccessful stint with Schalke, board member for sport Heidel is back in the job he excelled in for 24 years between 1992 and 2016. And former head coach Martin Schmidt (2015-2017) is also back at the club in a new role as sporting director.

Heidel, Schmidt and Svensson have all worked together before. Now, they're steering Mainz, one of the Bundesliga's smaller clubs in terms of support and revenue, through the pandemic – socially distanced from the fans. At least until it's safe to do otherwise.