Bundesliga: Bayern 13 points clear at the top after 1-0 success at Gladbach

Bayern inched closer to a fifth straight Bundesliga crown with a 1-0 victory at Gladbach that put them 13 points clear at the top with nine games to play. Schalke earlier capped a fine week with a 1-0 win at Mainz. 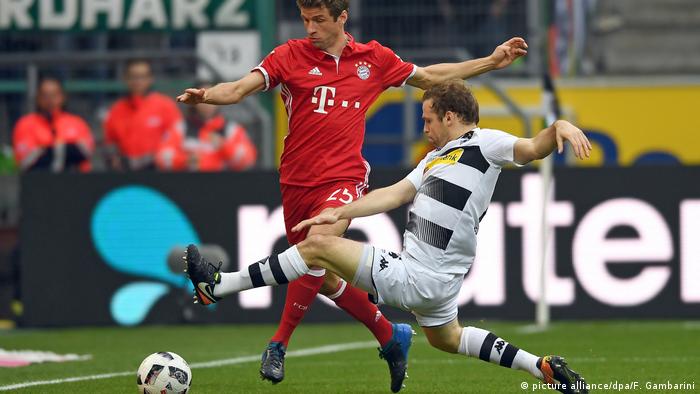 Second-placed Leipzig’s 3-0 defeat at Werder Bremen on Saturday handed Bayern a chance to extend their lead at the summit and they immediately went on the attack at the Borussia Park stadium.

Gladbach showed some early ambition of their own and Thiago and Javi Martinez had to be alert in the fifth minute to block a close-range effort from Tony Jantschke.

Bayern gained more control as the half progressed and it seemed only a matter of time before they would breach the home defenses.

Sommer produced a great save to deny Robert Lewandowski in the 25th minute, although the Poland striker perhaps should have picked out Franck Ribery who was free in the centre.

Sommer again impressed two minutes before the break. Robben unleashed a trademark curling effort that cannoned off the angle of post and crossbar and Lewandowski’s diving header on the follow-up was brilliantly saved by the home keeper.

There was nothing Sommer could do to stop Bayern’s opener in the second half, though.

Thiago drove in from the left and sent a delightful pass into space in the center of the Gladbach penalty area, where Thomas Müller took one touch before clipping the ball high into the net.

It was the Germany forward’s 93rd Bundesliga goal for Bayern in his 250th appearance in Germany’s top flight, but only his second in the Bundesliga this season.

Gladbach refused to throw in the towel and pushed hard for a leveler without really troubling the Bayern defense, superbly marshaled by Mats Hummels and Javi Martinez.

The Bayern players’ celebration with their fans after the whistle said it all as they know they have the title all-but won with nine games left.

"I think you saw in the first half how much we wanted to win the match," Müller told German television. "It’s a lot of fun playing with the lads and I think they were happy for me. It was a nice day for me of course today." 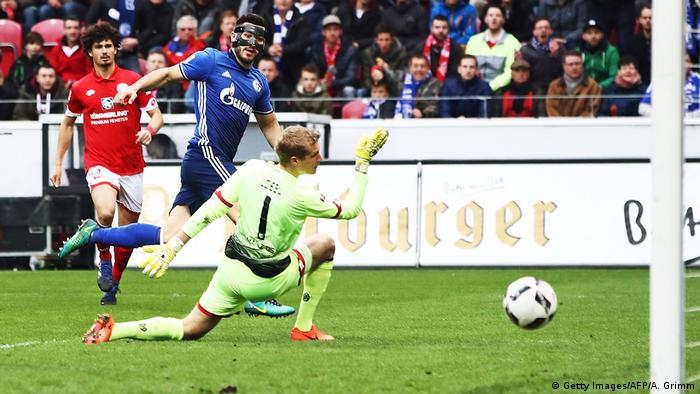 Schalke had followed up last weekend’s 3-0 victory at home to Augsburg with a 2-2 draw at Gladbach midweek that put them through to the Europa League quarterfinals to face Ajax.

Sunday’s success at Mainz lifted them to ninth in the Bundesliga, three points off a possible European qualification berth but still only six points above Hamburg in the relegation playoff position.

Mainz had the better chances in a tight first half at the Opel Arena, Colombian forward Jhon Cordoba testing the Schalke defense several times.

Danny Latza came close to an opener for the home side seven minutes before the break but Schalke goalkeeper Ralf Fährmann leaped to palm the midfielder’s deflected shot around the post.

Schalke grabbed the only goal five minutes into the second half.

Kolasinac, wearing a mask to protect his injured face, powered down the left wing, exchanged passes with Guido Burgstaller and cracked a left-foot shot into the far corner past Mainz keeper Jonas Lössl.

Mainz pressed forward for an equalizer, leaving plenty of space for Schalke to counterattack but Nabil Bentaleb missed a golden chance to double the scores in stoppage time.

Bundesliga: What to watch out for on Matchday 25

Matchday 25 presents an opportunity for a couple of teams that were prevously overperformers to steady the ship. Bayern Munich, meanwhile, could be in for an all-too rare serious test. (16.03.2017)

The draw for the quarterfinals of the Champions League has pitted German champions Bayern Munich against Real Madrid. Bundesliga rivals Borussia Dortmund have been drawn against Ligue 1 side Monaco. (17.03.2017)