German authorities have detained a suspect in the murder of Bulgarian journalist Viktoria Marinova, Bulgaria's top prosecutor said. From Berlin to Brussels, European governments have called for a swift investigation. 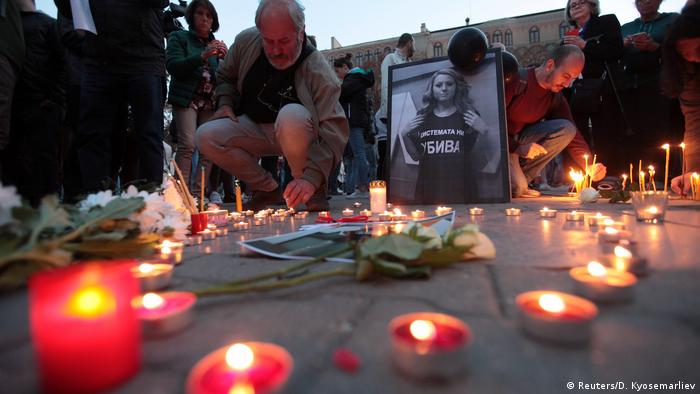 Bulgarian officials confirmed on Wednesday that a suspect was taken into custody in Germany for the murder of Bulgarian journalist Viktoria Marinova.

"We have enough proof linking this person to the scene of the crime," Interior Minister Mladen Marinov said at a press conference.

German authorities said on Wednesday that they'd arrested Severin K. on Tuesday evening outside the northern city of Hamburg on a European arrest warrant. Prosecutors in the northern German state of Lower Saxony said they're currently verifying the conditions that are required to extradite him to Bulgaria.

News of the man's capture first appeared on the website of Bulgaria's 168 Chasa newspaper late on Tuesday.

Local television station TVN, where Marinova was employed, later reported the suspect and Marinova had not known each other.

BTV, another Bulgarian broadcaster, claimed that police had found the journalist's mobile phone in the suspect's apartment in the northern town of Ruse.

Murder 'not linked' to her work

Marinova's body was found in a park in the northern Bulgarian town of Ruse on Saturday. Her body showed signs of strangulation and rape.

Bulgaria's chief prosecutor, Sotir Tsatsarov, said on Wednesday that Severin K. has already been charged, although he has not yet been sent back to Bulgaria. Tsatsarov said added that evidence collected so far indicates a spontaneous attack.

"We have collected a lot of evidence which for the time being suggests that the person is guilty. He has been charged in absence for two crimes - rape and premeditated murder with extreme cruelty," Tsatsarov said.

Interior Minister Marinov said authorities believe "there is no apparent link to her work," but investigators are still looking at "all hypotheses."

The 30-year-old reporter had most recently hosted investigative journalists on her television show who had reported on the misuse of European Union funds by Bulgarian authorities.

On Tuesday, police in Ruse arrested a Romanian citizen in connection with the murder, but later released him without charge due to a lack of concrete evidence.

Outcry over press freedom in Europe

Marinova's killing has sparked an international outcry, with European governments calling for a thorough investigation into her death.

Although authorities in Bulgaria have played down the likelihood that Marinova's murder was a direct result of her reporting, the country still ranks 111th in the world in terms of press freedom, making it not only the worst performer in the EU but the entire Balkan region.

The case has rekindled a heated debate over the safety of journalists in Europe. Over the past year, two other journalists working on investigations into state corruption were killed in Slovakia and Malta.