The US president visited the site of the mass shooting, where he blamed politicians and the media for spreading the extremist ideology behind the "terrorist" attack. 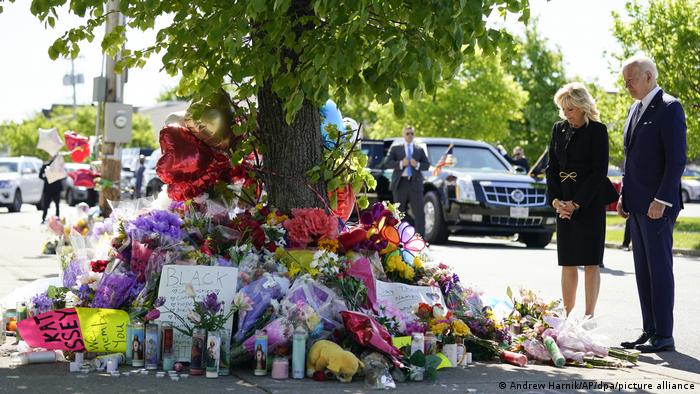 Biden and his wife, Jill Biden, laid a bouquet at a makeshift memorial outside the supermarket where the shooting took place

US President Joe Biden on Tuesday condemned what he called the "poison" of white supremacy behind the mass shooting that killed 10 Black people in the second-largest city in the state of New York.

Biden was speaking in Buffalo, where an armed 18-year-old white teenager is accused of opening fire on 13 people — 11 of whom are Black — at a supermarket in a predominantly Black neighborhood.

The FBI had said the case was being investigated as a hate crime and an act of "racially motivated violent extremism."

The US president also condemned "those who spread the lie for power, for political gain and for profit."

He described "a hate that through the media and politics [and] the internet has radicalized angry, alienated, lost and isolated individuals into falsely believing that they will be replaced — that's the word, replaced — by 'the other'."

The alleged mass killer had referred in a manifesto to the so-called replacement theory, which claims that non-white immigrants are overwhelming the white population as part of a leftist plot.

The conspiracy theory has spread from QAnon forums to mainstream areas, such as a nightly talk show by prominent Fox News host Tucker Carlson.

The White House has refused to directly blame such mainstream figures for promoting the theory.

But Biden's comments on Tuesday signaled that he was placing the blame not just on the actual shooter, but also on the influential spreaders of white supremacist ideology.

In his remarks, Biden said he ran for president to restore "the soul of the nation" after his predecessor, Donald Trump, refused to clearly condemn a deadly white supremacist rally in Virginia.

However, Biden has failed to stem the the rise of white supremacist groups or curb gun violence as Republican lawmakers block gun control efforts.

The president has asked Congress to ban civilians' purchase of military-style "assault" weapons and require new background checks for buyers. But his party, which largely supports gun safety measures, has not yielded enough votes to pass the legislation.

On Monday, a White House National Security Council spokesperson said Biden's administration was implementing a "government-wide national strategy to counter domestic terrorism, which President Biden directed his national security team to develop on his first full day in office, recognizing that has evolved into the most urgent terrorism threat the United States faces today."