Buenos Aires struggles with its recycling system | Environment | All topics from climate change to conservation | DW | 19.07.2012

90 percent of Buenos Aires' waste ends up in landfills. Thanks to trash collectors, at least some of it gets recycled. The city government now finally tries to comply with its own zero garbage law, passed in 2008. 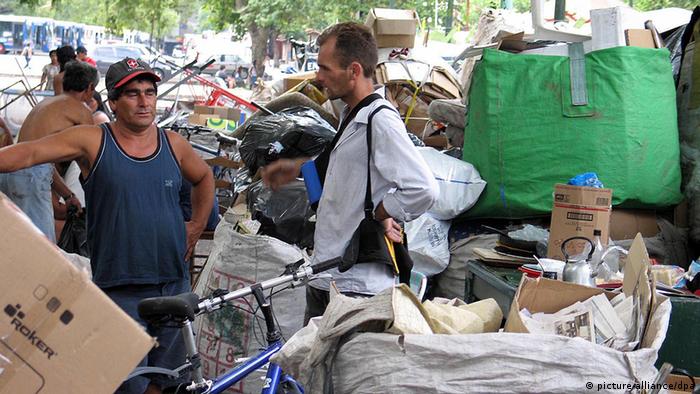 Every evening, residents of Buenos Aires leave their garbage out on the curbs, and the city's trucks make their nightly rounds to collect the bags. Home to three million people, the city of Buenos Aires generates 6,000 tons of trash every single day. Ninety percent of that waste ends up in the landfills of the surrounding province.

The city has to take action now, because the province's landfills are already full, says Lorena Pujo of Greenpeace Argentina. In fact, the landfills are overflowing.

"From the air, one can see that many square kilometers have been impacted. That is, one can see the machines working on the mountains, because, truth be told, first they fill the hole and then they start to form mountains," Pujo said. "For example, people that live near the Matanzas Landfill say that there are illegal mountains more than twenty meters tall." 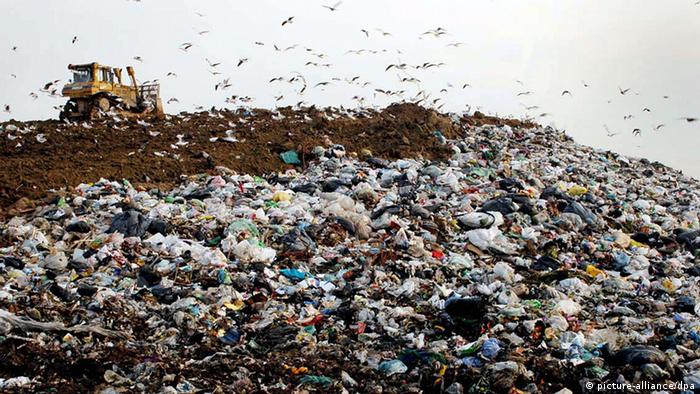 It's not that people In Buenos Aires haven't heard of recycling. Residents say they would be prepared to do more, but there are no services.

There are people who find value in the city's waste. They're known as cartoneros, which literally means "people of cardboard". Men, women, and children sort through trash bags and pull out cardboard, newspapers, and bottles. They put these materials in co-called carritos - carts as wide as cars - which they push or pull through the streets of Buenos Aires.

In Buenos Aires, there are some 15,000 cartoneros. Thanks to them, ten percent of the city's waste does get recycled. 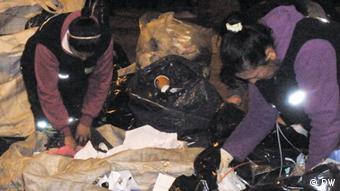 Many people started collecting trash to make a living

It's a largely informal system that developed after the Argentinean economic crash of 2001. That's when many people found themselves without work.

"I applied for work everywhere: as an office assistant, a waiter. But they rejected me everywhere because of my age," Maria Ramis said.

"That's when I started to gather cardboard, because, in the neighborhood assembly, there was a man who worked in a paper mill, and when he saw the desperation of some of the neighbors, all of us around 40 years old and all of us outside the system, he said, 'Look, gather paper and cardboard. When you have something together, let me know, and we'll sell it.'”

The cartoneros bring everything they collect to the centros verdes, Buenos Aires' recycling centers. They get paid based on the weight of the materials they collect. They tend to bring cardboard, because tetrapak and cans take up too much space in their carts, and paper takes too long to gather. The pay is low, especially for those whio aren't part of a cooperative: most cartoneros make about fifty pesos (nine euros) a day. 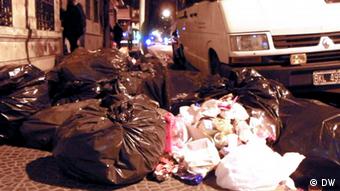 Only about ten percent of Buenos Aires' waste gets recycled

Ramis said that a better recycling system would give cartoneros the opportunity to find more stable employment in the city's new recycling plants.

The city is already trying to implement changes. Last month, new recycling containers appeared in the city center and in the posh recoleta neighborhood. These containers are the first steps the government has taken to implement its 2008 zero garbage law.

Who profits from the city's garbage?

According to Ramis, one of the reasons slowing down the implementation is the notion that Mauricio Macri, the mayor of Buenos Aires, profits from the city's garbage. "He has, at the family level, companies that have to do with garbage collection," she said.

The city's ministry of public spaces and the environment did not respond to DW's repeated interview requests. And local newspaper reports don't make it clear if the often-repeated accusations of ties between the mayor and the garbage companies are true or not.

In the meantime, the waste keeps piling up.

Lorena Pujo of Greenpeace Argentina says the city has a lot of work to do before it will have a functioning recycling system. 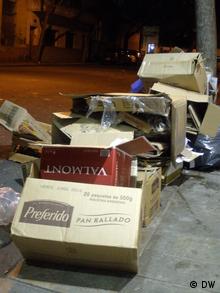 The pay is low, even for cardboard waste

"The city needs to install two containers on each block, so that people can separate wet waste from dry waste, like paper, cardboard, plastic, which are more easily recycled," Pujo said.

"Then there should also be two different trucks: one that collects the dry waste and one the wet, so that people don't see everything going to the same place, because that discourages them from separating waste in their home." She added that a public campaign ought to be set up to teach people about this new way to dispose of their garbage.

Pujo also said that the city should collect organic waste separately. Forty percent of what is currently destined for Buenos Aires' landfills is compostable.

But change might be on its way as the city has allocated 200 million pesos (35 million euros) for the distribution of more garbage and recycling containers over the course of the coming year.

The Riachuelo River in Argentina once symbolized the country's boom. Today, residents say it exemplifies corruption and waste. Efforts to clean up one of the world's most polluted bodies of water are gathering pace. (28.09.2011)

Germany is one of the European Union's top recyclers, sending nearly no garbage to landfill, according to a recent report. Friends of the Earth questions the numbers, though. (23.04.2012)

Listen to the report on garbage recycling in Buenos Aires