Brussels to outlaw use of insecticide chlorpyrifos

The European Commission has said use of the pesticide chlorpyrifos will be banned in the near future. The chemical treatment, used mainly for citrus fruits, has been linked with neurological problems. 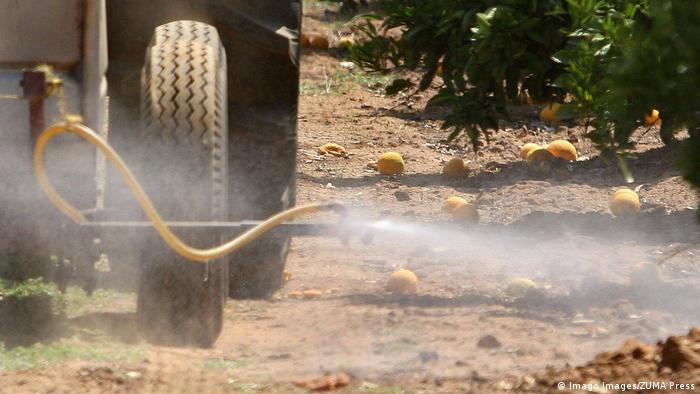 The European Commission on Friday said it would not renew a license for the insecticide chlorpyrifos after the European Union agency assessment.

Chlorpyrifos is already banned in Germany and six other EU countries, but it is still used on fruit plantations in much of southern Europe.

The European Food Safety Authority (EFSA) said the risks of exposure to the chemical were of particular concern when it came to children's health.

In Ausgust, EFSA certified chlorpyrifos as being likely to cause mutations in genes and harm the nervous system.

The report cited "possible genotoxic effects as well as neurological effects during development."

"This means that no safe exposure level ­— or toxicological reference value — can be set for the substance."

To be marketed in the EU, chemical substances must be approved by a committee of experts, headed by the Commission, made up of the bloc's 28 member countries.

Individual countries can then decide unilaterally whether or not to approve products that contain such substances.

Licensing for chlorpyrifos runs out in January, after which companies will have three months to dispose of stocks.

Importing fruit treated with the chemical has already been banned in Denmark, but is still permitted in Germany.  Use of the chemical is particularly prominent in the growing of citrus fruits such as mandarins and oranges.

Germany's Green politicians have called on the Berlin government to adopt the Danish legislation.

German Green member of the European Parliament Martin Häusling spoke of a "good day for the environment and European consumers." However, he added that the decision came "15 years too late," and that use of the chemical "should never have been allowed."

Chlorpyrifos was first licensed by EU states and the European Commission in 2005, despite health concerns having already arisen from animal tests at the time.