The sultan of Brunei said the country won't enforce new laws that include stoning to death for adultery and gay sex. The announcement comes after a global backlash to the laws, including calls for a boycott 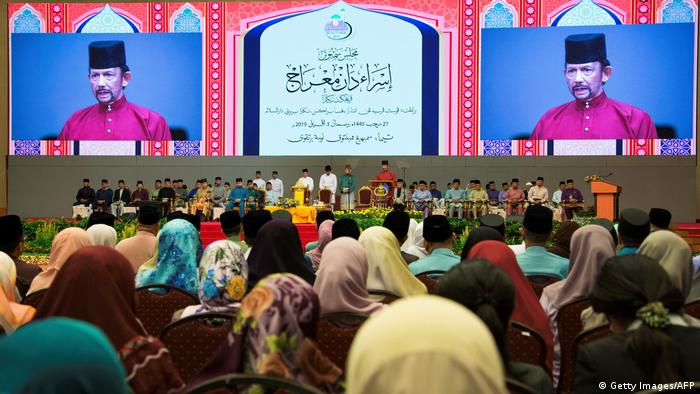 Brunei's Sultan Hassanal Bolkiah said a moratorium on the death penalty will be extended to the county's Islamic penal code.

The small, Muslim majority sultanate on the Southeast Asian island of Borneo drew international condemnation when it rolled out its interpretation of sharia laws on April 3.

The new punishments included the death penalty for gay sex, adultery and rape.

The sultan said that there had been "misperceptions" about the new law, called the Syariah Penal Code Order (SPCO), in a television address to welcome the start of the Muslim holy month of Ramadan.

"We are conscious of the fact that misperceptions may cause apprehension. However, we believe that once these have been cleared, the merit of the law will be evident," he said.

"As evident for more than two decades, we have practiced a de facto moratorium on the execution of death penalty for cases under the common law. This will also be applied to cases under the SPCO, which provides a wider scope for remission," the sultan added.

Sultan Bolkiah added that the country would ratify the United Nations Convention Against Torture (UNCAT).

The implementation of the laws sparked outrage around the world, with the United Nations condemning the move.

The laws also sparked calls from human rights groups and celebrities like George Clooney and Elton John to call for a boycott on luxury hotels owned by the sultan. The hotels included the Dorchester in London and the Beverley Hills Hotel in Los Angeles.

Sultan Bolkiah, one of the wealthiest men in the world, frequently faces criticism from activists, but it is unusual for him to respond to backlash.

Some crimes in Brunei already carry the death penalty, including drug trafficking and premeditated murder, but no executions have taken place since the 1990s.

Members of the LGBTQ community have long faced discrimination in Brunei, a sultanate home to more than 420,000 people.