Lawmakers have approved a motion requiring the government to make proposals to "restore the UK's natural environment." The move comes after protesters demonstrated for days, causing road closures and transit chaos. 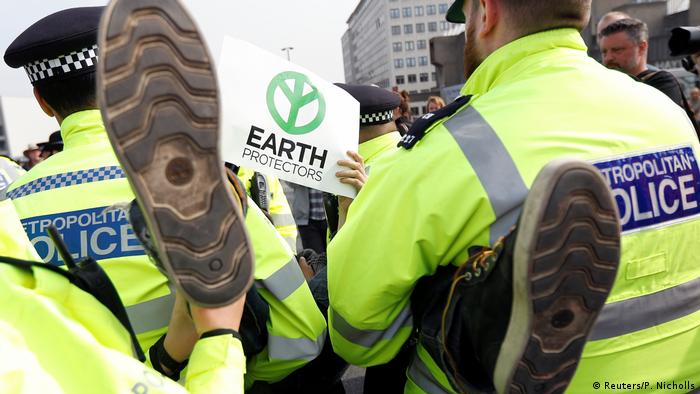 After a week and a half of protests in London by climate change activists, the British Parliament has declared a symbolic "environment and climate change emergency." Lawmakers backed a call by Jeremy Corbyn, leader of the opposition Labour Party, for "rapid and dramatic action" to protect the environment.

The nonbinding motion calls on Prime Minister Theresa May's government to make proposals to Parliament in the next six months to "restore the UK's natural environment and to deliver a circular, zero-waste economy."

The measure was passed as an opposition motion, using a procedure that the ruling party typically ignores, and has no direct consequences for policy.

In mid-April, climate change activists from the Extinction Rebellion protest group launched 11 days of protests in central London. The demonstrations caused road closures and paralyzed the London Underground transit system. The movement has also spread to Germany and other European countries.

In reaction to the motion, the Extinction Rebellion tweeted that lawmakers have started "to #TellTheTruth about climate change & ecological crisis."

In Parliament, Corbyn told lawmakers they should listen to those "who have the most to lose" from climate change. He described the younger generation as being "ahead of politicians on this, the most important issue of our time."

"We have no time to waste. We are living in a climate crisis that will spiral dangerously out of control unless we take rapid and dramatic action now," Corbyn told Parliament.

"Today, we have the opportunity to say, 'We hear you' ... By becoming the first parliament in the world to declare a climate emergency, we could, and I hope we do, set off a wave of action from parliaments and governments all around the world."

No greenhouse gas emissions by 2050

Corbyn hopes the motion will increase pressure on the British government. He is demanding the country take action to help avoid more than 1.5 degrees centigrade of warming, which would require global emissions to be cut by almost half of 2010 levels by 2030.

The Committee on Climate Change, an independent group that advises the British government, went a step further. In a report released on Thursday, it said the government should effectively eliminate greenhouse gas emissions by 2050.

The report said the UK needed to rapidly adopt policies that change everything from the way people heat their homes to what they eat. It called for a reduced consumption of meat and dairy products, changes in how farmers operate and a requirement for electric vehicles to be the only option by 2035.

The committee said the government needed to be ambitious if it wanted to limit the impacts of climate change, saying that existing plans to achieve net-zero emissions "must be greatly strengthened" because "current policy is not enough even for existing targets."

Protecting the climate by charging firms for their CO2 production has had a rocky road. But now the German government seems to be backing just such a broad proposal. Businesses and consumers are in a holding pattern. (30.04.2019)