British Prime Minister David Cameron has urged the world to send more aid to Syrian refugees in the Middle East. The UK premier said more help for refugees closer to home would help stem the migrant crisis in Europe. 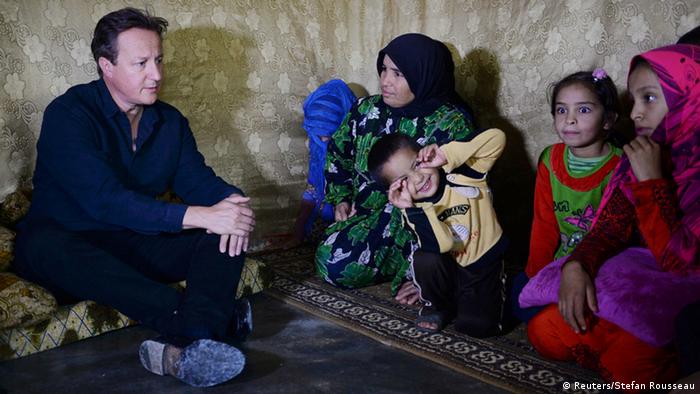 Cameron said there was a moral imperative for the international community to give more aid, but added that there was "a real connection to the refugee crisis in Europe."

The prime minister made his comments on Monday after touring refugee camps in Lebanon and Jordan.

UN agencies, including the World Food Program, have faced growing funding gaps which have led to cuts in food and cash aid to refugees in the region's host countries. Aid officials say the cuts have fueled the desire of many migrants to reach Europe, and may lead to a new wave of immigration.

Britain is the second largest contributor of aid to the Syrian crisis, after the US, with about $1.53 billion (1.35 billion euros) so far. Cameron said that while Britain would house refugees directly from Jordan and other neighboring states, other nations should do more to help refugees in the region, including those still in Syria.

"I would encourage others to step up to the plate and spend and invest in the way Britain has done," said Cameron.

"It is so important to help keep people close to their homes, clothe them, feed them and house them so they don't take the perilous journey across the seas which has led to such appalling losses of life," the prime minister said.

Cameron made his comments after at a meeting with Jordan's King Abdullah II. In Jordan, he toured the sprawling Zaatari camp, which houses nearly 80,000 Syrian refugees. Earlier, he had visited a smaller tented settlement in Lebanon's Bekaa Valley.

The UN refugee agency says there are some 1.1 million refugees in Lebanon, or one person in four in the country, while there are at least 620,000 UN-registered refugees in Jordan.

More than 240,000 people have been killed in Syria since the conflict began, with troops loyal to President Bashar al-Assad losing large swathes of territory to Islamist militant groups such as "Islamic State."