Britain has expressed its strongest concerns yet about the disappearance and detention of a UK passport holder in Hong Kong. Lee Bo is among several booksellers being held for investigation by Chinese authorities. 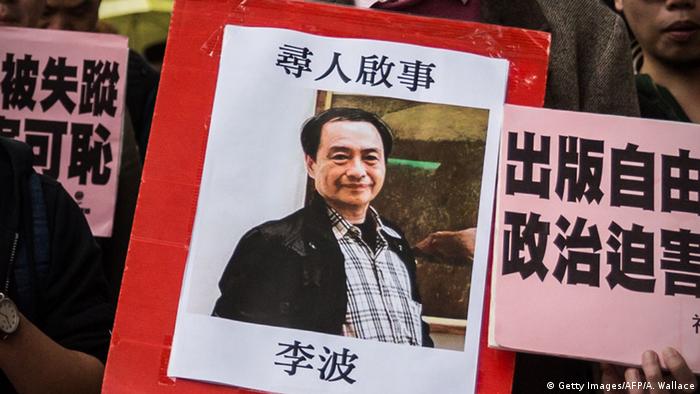 In a twice-yearly report on Hong Kong affairs presented to parliament on Friday, British Foreign Secretary Philip Hammond drew the conclusion that UK citizen Lee had been "involuntarily removed to the mainland."

Lee is among five men, with links to Hong Kong's publishing company Mighty Current Media and its Causeway Bay Bookshop, who have been detained in recent months.

A Hong Kong bookseller who mysteriously disappeared, suspected of being kidnapped by Chinese forces, has turned himself in to authorities.The news is a bizarre twist in the recent disappearance of five local publishers. (17.01.2016)

Thousands have taken to the streets of Hong Kong to call for the release of booksellers that are believed to have been detained by the authorities. The rally bore hallmarks of the city's pro-democracy protests of 2014. (10.01.2016)

All five later turned up in mainland China, with activists accusing Chinese authorities of snatching and removing them from Hong Kong by force. Such actions would contravene the laws of the semi-autonomous city - formerly a British colony. The "One Country, Two Systems" agreement on Hong Kong's post-colonial status forbids Chinese police from operating there.

"The full facts of the case remain unclear, but our current information indicates that Mr Lee was involuntarily removed to the mainland without any due process under Hong Kong Special Administrative Region law," Hammond said in his foreword to the regular six-month report.

"This constitutes a serious breach of the Sino-British Joint Declaration on Hong Kong and undermines the principle of 'One Country, Two Systems' which assures Hong Kong residents of the protection of the Hong Kong legal system," said Hammond.

The Joint Declaration is the treaty signed between Britain and China in 1984. The document was intended to safeguard Hong Kong's rights and freedoms after Beijing took control in 1997.

Britain had previously expressed concern over Lee's case, without giving a definitive assessment of what was believed to have happened. Last month, Hammond said he had made urgent inquiries with Chinese authorities about Lee's whereabouts.

Lee disappeared at the end of last December but had not taken his Chinese travel permit with him, sparking speculation that he might have been forcibly taken to the mainland. In letters sent to his wife, Lee said he was helping with an investigation on the mainland, but some believe he was coerced.

Lee's colleague Gui Minhai disappeared from Thailand in October, and last month appeared on Chinese state television confessing to a decade-old fatal drunk driving accident. The three other men were last week said to be being held on the mainland for an investigation into unspecified "illegal activities."

The disappearances prompted protests by activists on the streets of Hong Kong last month.

Washington has urged Beijing to explain the disappearances, with a State Department spokesman saying the incidents "raise serious questions about China's commitment to Hong Kong's autonomy."