Australians hailed the move as a symbol of hope in the wake of the coronavirus pandemic. The bid is not yet fully confirmed, however. 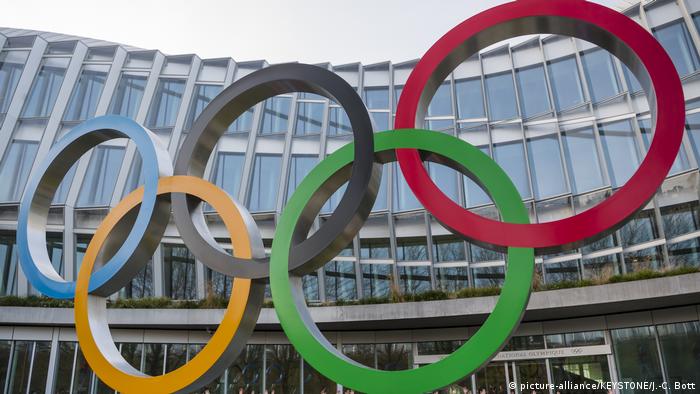 The Olympic Rings are seen outside of the International Olympic Committee building in Lausanne, Switzerland

The International Olympic Committee (IOC) named Brisbane its preferred bidder for the 2032 Olympics on Thursday, with no present rivals.

The move, which was hailed as a symbol of hope after a year of pandemic measures, is not yet a done deal, however.

"It is an exciting day," said Prime Minister Scott Morrison, adding that "we've still got a long way to go."

"It was a long night...but a very mature decision from the IOC. To take a decision when you've still got a few other cities there and say 'well, we're going to go into targeted dialogue with one preferred city' was a big call by them,'' said the Australian Olympic Committee president, John Coates.

"The IOC now deal exclusively with us while we complete the questionnaire. The other cities who have shown interest have been parked...it's significant recognition," he said.

The move comes after the IOC changed its selection procedure to be "more cost-effective, prevent any undue influence, be more apolitical and increasingly objective," said IOC president Thomas Bach.

Others working on 2032 bids

The 2032 contest was expected to include Doha and Budapest, which withdrew late from the 2024 contest. China, Germany, India, Indonesia and Russia were also working on possible bids for 2032.

Bach told reporters in Switzerland that an IOC panel overseeing the bid process would begin "targeted dialogue" with Australian organizers.

Queensland state premier Annastacia Palaszczuk said a victory would help the region recover from the coronavirus pandemic, which has flattened the local tourism industry. Australia is currently only offering a limited number of tourist flights with New Zealand, national airline Qantas on Thursday said it did not expect other international flights to restart until October.

"It would bring huge economic benefit and jobs as part of our economic recovery as we come out of Covid," Palaszczuk told ABC radio. "Most importantly, it gives us hope, it gives us something to look forward to. 2032 may be out in the distance — but [it's] that firm light at the end of the tunnel."

She added that Brisbane and surrounding cities to the north, south and west already had 85% of the venues required for the games and that was the "gamechanger" as the IOC seeks to cut the costs of hosting the games.

"We don't have to build huge stadiums that are not going to be used in the future, and this gives hope and opportunity as we got through our economic recovery and plan for the future," she said. Organizers could either build a new, 50,000-seat main stadium for the opening ceremony and track and field competition, or upgrade one of the region's existing stadiums.

The move garnered criticism from German Olympic officials, who say their bid was not yet complete.

The head of Germany's 2032 Rhine-Ruhr bid, Michael Mronz, said he was "surprised" by the decision. Mronz said the roadmap for the bid required more time to outline, and that a German candidacy would also require a "democratic referendum" which takes longer to outline than a bid "without direct citizen participation."

Because a citizens' referendum on a bid would not be held until the fall, and the financing of the Summer Games has not yet been secured, the German Olympic Sports Federation (the DOSB) decided in February not to enter into a concrete bid with the IOC. As a result, Germany was not shortlisted in the evaluation process.

It's the latest in a series of setbacks for the DOSB's ambitions of bringing the Games back to Germany. Hamburg's bid for the 2020 Olympics and Munich's bid for the 2022 Winter Olympics were both quashed by locals at referendums. These failures, and other similar ones around the world, led to Bach's push for a simplified and less competitive bidding process.

Federation President Alfons Hörmann now wants to reevaluate how to proceed. However, he said he was not surprised by the IOC's decision to choose Brisbane, as the city already fulfilled all of the necessary prerequisites for a successful bid.

'There's still work to be done'

Australia has hosted the Olympics twice, in Melbourne in 1956 and Sydney in 2000. Brisbane and the nearby Gold Coast already have extensive sports infrastructure.

Coates said the IOC has reviewed plans and various feasibility studies, and now the "federal government has to provide its undertakings in terms of security, things that's done for any international event that comes here, border control, all of those things. So there's work to be done in that area.''

"When we started this journey...many people were skeptical. Now we're one step away from being named as the host of the 2032 Olympic and Paralympic Games," Brisbane Lord Mayor Adrian Schrinner said. "Today is not the time to get over-excited, there is still plenty of work to be done.''

The Tokyo Summer Olympics are expected to be held from July 23 to August 8, 2021. They were originally planned to take place last summer, but were postponed due to the coronavirus pandemic.