Voters in the southern German state of Bavaria have rejected a proposal to bid for Munich to host the 2022 Winter Olympics. The plan was voted down in all four municipalities that had hoped to join forces in the bid. 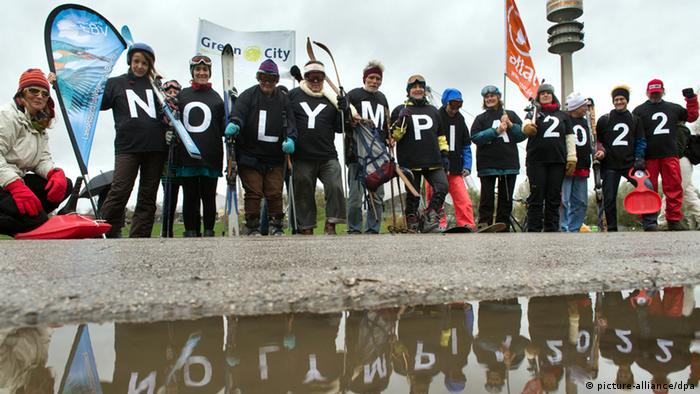 The fate of the bid to host the 2022 Winter Games became clear early on Sunday evening when intial results showed that voters in Garmisch-Partenkirchen had rejected the plan by a vote of almost 52 percent against. That's because, the way the proposal was set up, voters in all four of the municipalities had to support the plan, in order for it to go forward.

In the end, not only the voters in Garmisch, but also those in Munich and the nearby districts of Traunstein and Berchtesgadener Land rejected the plan.

The leader of the NOlympia organization that had campaigned against the proposal, expressed his satisfaction shortly after it became clear that the proposal had been voted down.

"The vote is not a signal against the sport, but against the non-transparency and the greed for profit of the IOC (International Olympic Committee)," said Ludwig Hartmann, a who is also a Green Party lawmaker in the Bavarian state legislature.

"I think all possible Olympic bids in Germany are now out of question. The IOC has to change first. It's not the venues that have to adapt to the IOC, but the other way around," Hartmann added.

Apart from the high costs associated with hosting the Olympics, the NOlympia had also cited environmental concerns.

Supporters of the bid were obviously disappointed, but agreed with Hartmann on one point.

The voters rejection of the bid proposal "clearly means that another Olympic bid in Germany won't be possible for a long time," Michael Vesper, the director general of the German Olympic Sports Association said.

"I am very disappointed, this is very bitter for German sport," he added.

Some have also interpreted the rejection as being an embarrassment for the newly elected IOC President Thomas Bach of Germany.

The deadline to submit bids to the International Olympic Committee is November 14, and the selection of a host city is due in 2015. Oslo, Lviv (Ukraine), and Beijing are among the potential candidate cities.

Munich had failed in a previous bid to host the 2018 Winter Games to the South Korean city of Pyeongchang. It had hoped to become the first city to host both the Summer and Winter versions of the Games, having hosted the 1972 Summer Olympics.