As UK lawmakers passed an amendment delaying a key Brexit vote, pro-EU protesters marched through London demanding a second referendum. Organizers say the revised divorce plan must be put back to the British electorate. 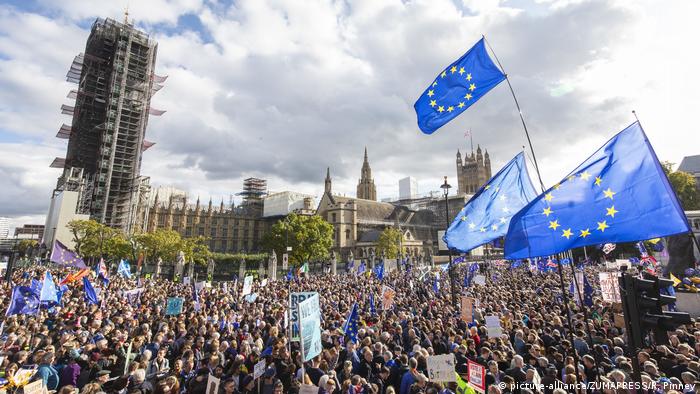 Tens of thousands of protesters on Saturday marched towards the UK Houses of Parliament demanding a new referendum on whether Britain should leave the European Union.

The huge rally came as lawmakers in the House of Commons approved an amendment to delay voting on Prime Minister Boris Johnson's amended Brexit deal with the EU, which was agreed this week in Brussels.

Protesters waved EU flags and carried signs calling for Brexit to be halted and for the British public to have a "final say" on whether the country's 2016 decision to end its 40-year membership of the European project should proceed.

"I am incensed that we are not being listened to. Nearly all the polls show that now people want to remain in the EU. We feel that we are voiceless," said Hannah Barton, 56, a cider maker from central England, who was draped in an EU flag.

Barton thinks Brexit will "destroy the economy" due to the weakened links with the country's biggest trading partner.

"If what Johnson is putting to parliament today was the argument in the referendum they would have lost by a landslide," said protester Phil Canney.

He accused the UK government of having "taken the result and run away with it to excuse anything they want to do."

Ahead of the march, organizer James McGrory, director of the People's Vote campaign, said the government should heed the anger of pro-Europeans and hold another referendum on EU membership.

"This new deal bears no resemblance to what people were promised and so it is only right that the public deserves another chance to have their say," he added.

London Mayor Sadiq Khan and Caroline Lucas, Britain's sole Green Party member of parliament, are among the politicians scheduled to speak at the event.

"Thousands of people from all corners of our country, all ages and backgrounds, making sure our message is heard loud and clear — give the people the final say on Brexit," Khan said in a tweet.

However, even if a second referendum were to be agreed, it would first need to find enough support in parliament, and there would be months of negotiations about what question to ask.