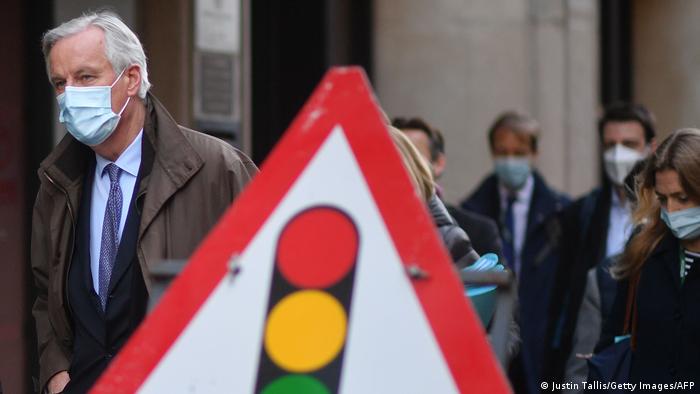 EU chief Brexit negotiator Michel Barnier warned the UK on Wednesday that a deal needs to be reached by the end of this week.

The Frenchman said the next 72 hours will be crucial for the fate of the negotiations during a closed-door meeting of MEPs.

"I sincerely do not know if we can reach for a deal," Barnier said, according to a transcript of the meeting obtained by DW. "The coming hours and days will be decisive."

Barnier briefed both EU ambassadors and parliamentarians after 28 consecutive days of talks.

The meeting came after some diplomats expressed concern that Barnier's negotiating team might be offering the British government too many compromises.

But Barnier rebuffed press reports that he was being overly lenient in the talks.

"There's an objective difference between a member state and a third state. That's what Brexit is. It has consequences."

EU officials are worried that offering the UK a zero-tariff, zero quota deal without a commitment on minimum standards would lead to "dumping" and undermine the bloc's single market.

Barnier and his British counterpart, David Frost, have been at loggerheads for months over key sticking points that include unfair competition rules, policing any future deal and fishing rights.

'Deal hangs in the balance'

EU diplomats told DW that there had been "some progress" on these issues, but that "a deal hangs in the balance."

A UK government spokesman said the British team was "negotiating constructively" with Barnier.

"But it will require political will and creativity from their side if we are to get a deal," the spokesman said.

Both negotiating teams have been locked in intensified negotiations over the past four days in another bid to break the deadlock.

Talks will continue until the end of the week when Barnier and European Commission officials will review progress once more.

A no-deal Brexit would mean that the UK and EU fall back on rules set for international trade by the World Trade Organization.

It means tariffs will be slapped on goods sold and extra customs checks at major ports across the UK and in northern Europe.

One EU diplomat told Reuters news agency that Barnier should not sign a rushed deal, even if it means a period of trade without an agreement.

"There is a worry that because of this pressure of time there is a temptation to rush," the diplomat said after a briefing by negotiator Michel Barnier for the 27 member states' envoys in Brussels. "We told him: don't do that."