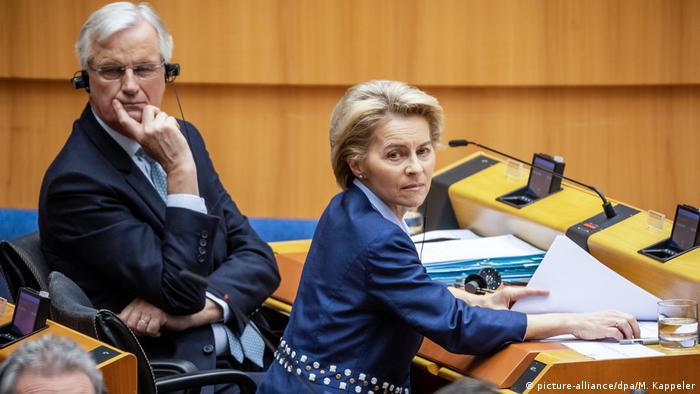 The president of the European Commission, Ursula von der Leyen, on Friday hailed better progress in recent talks on a post-Brexit trade deal but added that there was more work to be done.

"After difficult weeks with very, very slow progress, now we've seen in the last days better progress, more movement on important files. This is good," she said, before warning that "nothing is agreed until everything is agreed."

She added that the team is "engaged and working tirelessly day and night to indeed reach the natural deadline ... by the end of the year."

A senior EU official confirmed to DW that there had "tangible progress" in recent days and that the gaps between both sides were "slowly shrinking" on the main sticking points.

Another EU diplomat from a country with a huge fishing industry said it was now down to British Prime Minister Boris Johnson to make the "necessary political choices" to seal a deal.

A UK government spokesperson declined to comment on von der Leyen's remarks, saying only that "progress had been made" in the latest round of negotiations.

The teams broke off talks yesterday after it emerged that one of EU negotiator Michel Barnier's staff had tested positive for coronavirus.

Barnier has gone into self-isolation for the next seven to 10 days in line with Belgian health rules.

EU officials estimate it would take roughly a month for lawyers and translators to work on the final text once it has been completely finalized.

European Parliament regulations say all EU documents must be translated into all the bloc's 23 other official languages before MEPs can vote on them.

French officials told fellow diplomats yesterday that there can be no exceptions to the rules.

'Would the British parliament ever contemplate ratifying a treaty that doesn’t exist in English?' said one EU source.

Earlier Friday, Reuters cited UK sources who work on state aid as saying that Britain had offered to set up a regulator for corporate subsidies, something the EU has long asked for.

The news agency cited an EU diplomat confirming that Britain had made a proposal but said it fell short of the bloc's demand for a body independent of government and with a clear mandate.

Britain and the EU have been engaged in eight months of tense negotiations to work out a new trading relationship following the UK's departure from the political institutions of the bloc at the end of January.

During the so-called "transition period" expiring at year's end, formally leaving the EU has had almost no impact on other ties.

The talks have failed to make much headway in recent months on the key issues of fishing rights, business regulations and state aid, among others. Several deadlines have come and gone.

Britain has accused Brussels of making unreasonable demands in its attempt to ensure the country doesn't become a low-regulation economic rival on the bloc's doorstep.

An 11-month transition period where Britain remains in the EU's single market and customs union ends on December 31. Unless a trade deal is reached, quotas and tariffs would hit bilateral trade from 2021.

Any agreement struck must still be approved by all the EU countries, as well as the European Parliament, to come into effect, which is likely to take at least four weeks.

With most deadlines missed, France, Belgium and the Netherlands have asked Brussels to update emergency plans in case of a 'no-deal' scenario.

The British prime minister has taken the precautionary measure after coming in contact with a lawmaker who has since tested positive for COVID-19. The news comes as Britain and the EU hope to clinch a last-minute deal.