Tory MP on COVID: UK government has done everything it could | News and current affairs from Germany and around the world | DW | 12.11.2020

Tory MP on COVID: UK government has done everything it could

Britain's handling of the coronavirus pandemic has come under fire for being chaotic and ineffective. Conservative MP Bim Afolami says no one could see the outcome as good given the high COVID-19 death toll in UK.

A member of parliament in the UK’s ruling Conservative party has defended the government’s handling of the pandemic, saying it had coped with unprecedented circumstances that no one had foreseen and everyone was still learning how to best combat the spread of the virus.

"Hindsight is a wonderful thing," Bim Afolami told DW’s Conflict Zone, noting that even the experts revised their advice.

"The scientific advisers have given … at different times contradictory advice. I remember when they were saying that masks shouldn't be worn. Now the advice is to wear masks."

"I don't think at all that the government has done anything other than try and present as much information as quickly as possible to the public," Afolami said.

"The government has done everything it could," he said, while admitting that mistakes had been made.

Afolami also defended the decision to award a contract to Serco, a British company, to assist the government’s efforts to test and trace COVID-19 cases. The firm was fined £19 million (€21.5 million, $26 million) in 2019 over fraud and false accounting related to another government contract.  The MP said he had looked into Serco in "immense detail."

"Nobody is saying the reason why the test and trace system is not perfect is because of Serco,” Afolami told Sebastian.

The government has spent 12 billion pounds on establishing an effective test and trace system but with limited success.

Asked about criticism from senior Tories that the government had reversed major policies without warning and was losing credibility, Afolami suggested that people were suffering from COVID fatigue.

"They're fed up with the lockdown." 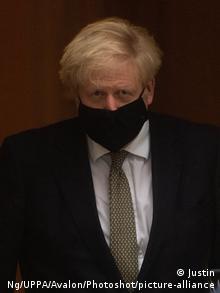 A recent YouGov poll that showed more than two-thirds of Britons thought Prime Minister Boris Johnson and the government had handled the pandemic badly.

"I'm afraid opinion polls will tell you one thing one day and something else the other," Afolami said.

"I don't think it is an act of bad faith," he said on the government’s plans to unilaterally rewrite the Brexit deal with the EU.

Afolami said the government would still defend the Good Friday Agreement with Ireland.