Beer consumption in Germany fell for the third year in a row in 2009. But Germans are still some of the world's biggest beer drinkers, and a hot summer coupled with some World Cup soccer victories could boost sales. 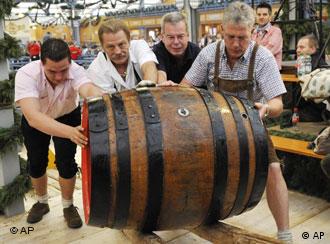 That Germans are consuming less beer isn't saying much

On April 23, German brewers celebrate the purity law of 1516, which states beer is to be made from water, barley, hops and nothing else.

But the country's Federal Statistics Office in Wiesbaden reminded them on Tuesday that domestic beer consumption has been on a steady downward trajectory since 1992 - the peak consumption year that saw consumers drink an average of 171.3 liters of the hopped beverage per person in the wake of reunification.

Not that the brewers are too worried, though. Germany still has 1,300 breweries employing 30,000 people who produce 5,000 different beers. And when it comes to beer, Germans over 15 years of age still out-drink most of their European counterparts by far, averaging 121.4 liters in 2009. 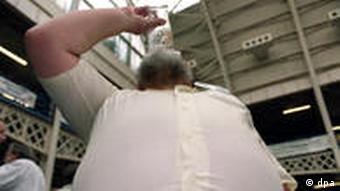 Health-consciousness is having an effect on German beer consumption

According to Marc-Oliver Huhnholz of the German Brewers Coalition in Berlin, the German beer market is surprisingly domestic, with exports only accounting for about 15 percent of revenue. The downward trend in consumption has to do with Germany's changing demographics and social conditions.

"The beer drinking population in Germany is getting to be older and fewer in numbers. Sociologically, working conditions, lifestyles and nutritional habits are constantly changing," he told Deutsche Welle.

Habits for men such as drinking beer on the job or spending Sunday mornings at the pub have just become less socially acceptable, and younger generations tend to drink spirits in the form of mixed drinks.

While pre-mixed 'alcopops' have become expensive due to special taxation, beer-based mixed drinks compose about 4-5 percent of the beer market and represent an opportunity to connect with a younger market, according to Huhnholz. Of that 4-5 percent, 50 percent are traditional German mixes such as 'radler' - a mixture of beer and lemonade.

"Of course we see these mixed drinks with beer as a good addition to the range of products offered by brewers as well as alcohol free beer," Huhnholz said, adding that alcohol-free beer is also gaining popularity as the population becomes more health conscious.

Young people drink more, although they are gradually choosing other beverages

With its beer gardens and Oktoberfest celebrations, the German state of Bavaria is known as the bastion of the nation's beer culture. Walter Koenig of the Bavarian Brewers Coalition in Munich said sales in his state are generally slightly higher than the national average.

"In Germany there is a political movement against alcohol consumption, and no distinction is made between moderate enjoyment and abuse. I see that as the wrong approach," he told Deutsche Welle.

Bavarian brewers have been successful in selling their beer in other European markets, especially in Italy. They have also made some inroads in the United States, but the emergence of local craft breweries there has slowed their progress, according to Koenig.

"The Italian market is very reliable because the Italians place a very high value on Bavarian beer," he said. 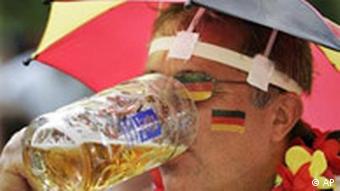 While the downward trend in beer consumption is expected to continue, the industry could enjoy a nice spike in sales if the summer is hot and Germany's national soccer team performs well at the World Cup in South Africa in June.

"Good weather has a bigger effect than the World Cup. But if both happen at the same time, then we'll definitely profit this summer," Koenig said.

Most people consider Germany the land of bratwurst and beer, but continued high consumption of alcohol has many worried. Extreme addiction to medication is also troubling, especially among seniors, a new study says. (08.04.2010)

Specialist brewers in Aberdeenshire have launched a new beer that not only knocks the socks off those hardened enough to drink it, but also thwarts German efforts to be creator of the world's strongest beer. (18.02.2010)

German beer consumption has been in steady decline since the early 1990s –- especially among young people. Speciality breweries and brew-pubs could change that, but they've not really become popular -- so far. (24.01.2008)