Breaking down walls in Thuringia

Germany's left-wing has made history with a deal that will make a Socialist the head of a German federal state. The coalition government in Thuringia will include the Left party, the Social Democrats and the Greens. 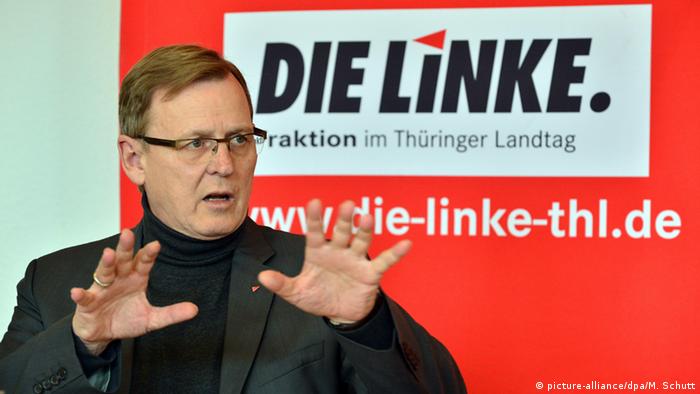 Two months after state elections in the eastern state of Thuringia, and 25 years after the wall came down between East and West Berlin, an announcement came out Wednesday that one of Germany's 16 federal states will be governed by a Socialist politician.

Bodo Ramelow, state premier candidate for Thuringia's Left Party, said via Twitter that coalition talks with the Social Democrats (SPD) and the Green Party had been concluded and plans for the Left, SPD Green coalition were set. This is known in German political parlance as a Red-Red-Green coalition, due the parties' respective colors.

First of its kind

This coalition is unprecedented; not only, however, because it has never existed in this form federally, or in one of Germany's states before. There also has never been a politician from the Left Party, the remains of the Socialist Unity Party (SED) that governed Communist East Germany untouched for four decades, at the head of a German state government.

Although the Left Party traditionally fares well in the former east of the country and has already regularly participated in regional government there, the prospect of one of their members being appointed regional state premier for the first time has fuelled heated debate across Germany.

This past weekend, when the entire country was celebrating the 25th anniversary of the Fall of the Berlin Wall, around 4,000 people rallied in Erfurt, the regional state capital of Thuringia, to protest against the party. A number of conservative politicians from Merkel's Christian Democratic Union, including the chancellor herself, have also expressed their misgivings about the coalition experiment.

In Thuringia, the Christian Democrats have made up a part of the ruling coalition ever since the fall of the Berlin Wall. The CDU was the highest vote-getter in September's state election, but they weren't able to ally with the SPD this time around to stay in power. During the coalition talks, the outgoing CDU state premier Christine Lieberknecht implored her prospective colleagues not to make a "grave error" by joining with the Left party, citing the "bitter historical message" such a move would send.

For the first time since the eastern state of Thuringia took its place in a reunified Germany, a government without Chancellor Merkel's Christian Democrats beckons. The Left party is set to lead the coalition. (04.11.2014)

Something's stirring in the state of Thuringia. It could very soon become the first state in the Federal Republic of Germany to have a Socialist Left Party candidate take over as state premier. Reactions are mixed. (20.10.2014)