Brazil's indigenous tribes are calling for environmental protections for their land in this year's annual protest. A rule approved in 2017 changed the rules for indigenous land claims, making them near impossible. 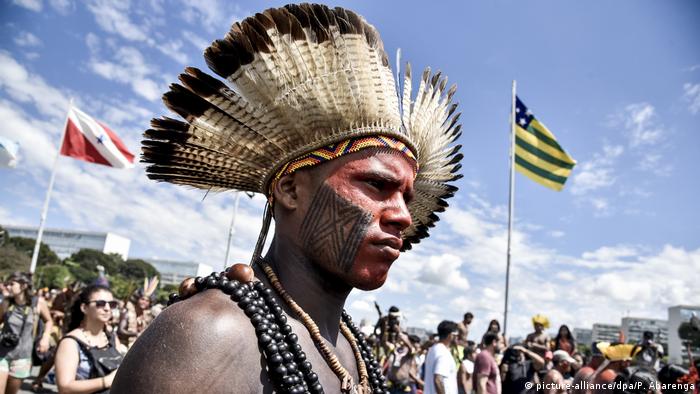 About 2,000 Indigenous Brazilians marched through Brazil's capital on Thursday, to demand protection for ancestral lands that are subject to ever-growing farm businesses.

The march is part of a week-long, annual indigenous protest camp that this year attracted around 3,500 representatives from about 100 tribes, organizers said.

Some groups danced through the streets wearing traditional feathered headdresses and body paint, singing and playing drums and maracas, while in front of the Justice Ministry, a group of people lay down on a Brazilian flag and a sign that read, "end the indigenous genocide."

Others painted one lane of a central road red, symbolizing a trail of blood from the violence against indigenous people during conflicts with Brazil's enormous agriculture industries, such as ranching, soya and other food commodities. Under a new rule approved last year, it has become increasingly difficult for Brazil's indigenous people to claim land

Political instability in Brazil has led to the country's indigenous population losing grip on its land rights, which play a crucial role preserving both traditions and the habitats in which it has lived for generations.

Brazil's 1988 Constitution called for the official demarcation of all lands belonging to indigenous people within five years, but that process is still ongoing due to complexities and political sensitivity surrounding the issue.

Indigenous leaders have said the situation has become even more uncertain since President Michel Temer took office in 2016 and began what they say is a systematic rollback of indigenous rights and protections.

This year's "Free Land Encampment," has focused on a rule adopted in July, which stipulates that authorities can only designate lands as belonging to indigenous people if they were occupied in 1988, when Brazil's Constitution came into effect. 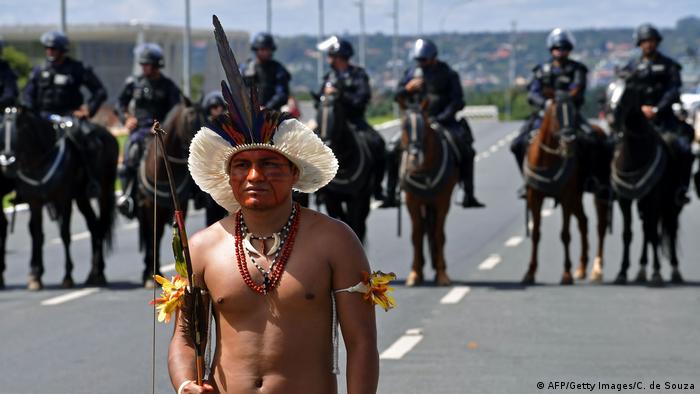 The rule was backed by Congress' so-called "rural caucus" — a group of lawmakers who represent the interests of rural landowners who have been allies of Temer.

The group argues that more land needs to be opened up to economic activity to bring development and jobs to remote areas of the country.

Indigenous groups say the new rule ignores the history of dispossession in Brazil — which was particularly harsh during the 1964-1985 dictatorship.

The rule will make the recognition of many pending indigenous land claims near impossible, activists say, and could even be used to claw back already designated land.

It is possible that lands could become subject to logging, grazing and other business interests, which could be detrimental to Brazil's ability to protect its environment and curb deforestation.

Late on Thursday, Temer's office announced the president had for the first time approved 20,000 hectares (almost 50,000 acres) of land in central-western Brazil as belonging to the Guato people.

Following a wave of criticism, Brazil's government has issued a new decree on a large nature reserve in the Amazon. The order still strips protections from the area, but says mining won't take place in indigenous areas. (30.08.2017)

Living Planet: Who inherits the Earth?

This week's Living Planet looks at Brazil's treatment of its indigenous people ahead of the Olympics, a First Nations fight for sacred land in Canada and the planet's eco-footprint on Earth Overshoot Day. (05.08.2016)