A peaceful protest by members of Brazil's indigenous tribes has turned violent, with police responding with tear gas. Protesters claim the government is working to roll back protections in various parts of the Amazon. 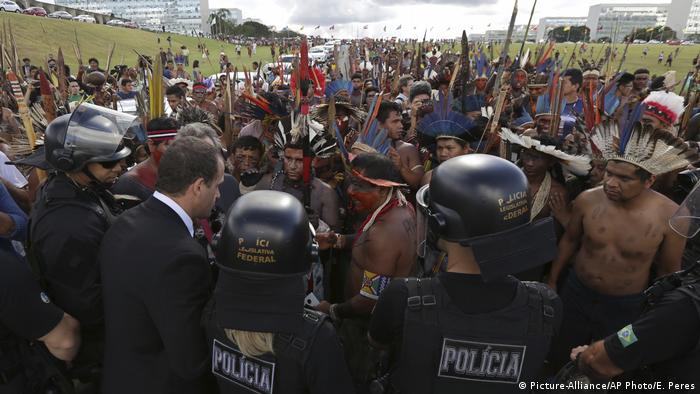 Brazilian military police in front of Congress fired tear gas and rubber bullets at indigenous protesters, who responded with arrows and spears to end what started as a peaceful protest by indigenous peoples on Tuesday.

Police said protesters were too close to a large fountain in front of the Congressional building.

"The Indians did not comply with the agreement they made with police" on the accepted boundaries of the protest, read a police statement. "They were threatening to invade Congress."

Protesters have denied the claim, saying they were allowed to be in front of the fountain. Some argued the police were looking for a reason to remove the protesters.

"Unfortunately, the brute force of the police caused this," Kleber Karipuna, a protester from the northern state of Amapa, told the Associated Press.

The protest involved thousands of members of indigenous tribes in traditional clothing across Brazil during what is known as Indigenous Week. The events during the week in the capital, Brasilia, show the problems the indigenous tribes face in the modern world, as well as their attempts to keep their land from farmers and the agricultural industry.

"The agricultural and evangelical lobby want to destroy our rights and turn Brazil into the world's breadbasket, ending biodiversity," Marize de Oliveira, a historian of the Guarani people, told the Agence France-Presse.

Sonia Guajajara, one of the protest's coordinators, said there were about 4,000 participants in Tuesday's demonstration. Few protesters were injured in the chaos, and it is not known if any police officers were injured. Protesters said at least four people were arrested, though police could not confirm the number of arrests.

The indigenous protesters have said they plan to camp out all week in front of Congress, claiming the government of
President Michel Temer is working to roll back protections in various parts of the Amazon.

One of the world's most isolated groups of people has made contact from their home deep within the Brazilian rainforest. Their unique existence is under threat from illegal activities and encroaching civilization. (09.08.2014)