At a recent rally, President Jair Bolsonaro joined radical protesters calling for Brazilian democracy to be abolished. Other institutions, including the country's military, are speaking out against his rhetoric. 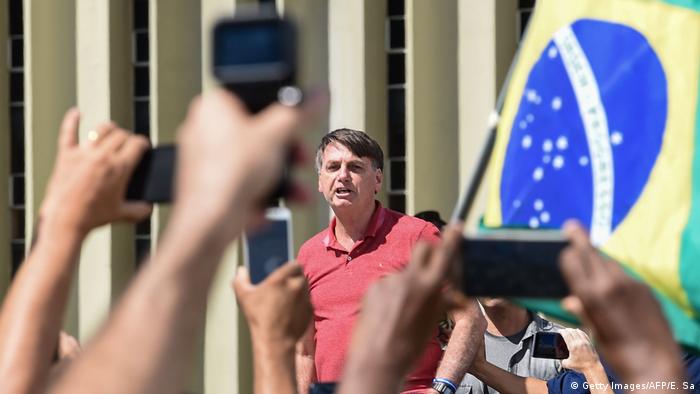 Speaking at a rally with hundreds of supporters in the Brazilian capital Brasilia on April 19, President Jair Bolsonaro told his backers: "I am here because I believe in you — and you are here, because you believe in Brazil." They had gathered to protest coronavirus lockdown measures imposed by the country's governors and mayors.

The protesters also called for Brazil's Congress and Supreme Court to be shut down, and for decree AI-5 – issued by the Brazilian military dictatorship in 1968 — to be reinstated. It had allowed the junta, which governed the country from 1964 to 1985, to shut down parliament and scrap civil liberties. Protesters also carried signs demanding a military intervention with Bolsonaro at the helm.

Such a move would constitute a clear violation of the constitution. "It irritated the military, in particular because Bolsonaro held his speech in front of the armed forces headquarters," says Carlos Fico, a professor of history at the Federal University of Rio de Janeiro.

The next morning, Bolsonaro somewhat reversed his position, arguing he is in favor of Brazilian democracy and the constitution after all. Press reports indicate military figures close to him had urged Bolsonaro to row back. This flip-flopping is nothing unusual for the former army captain, Fico explains. "Bolsonaro has made such criminal statements several times before, and then taken them back again. But this time, the military figures advising him have seemingly become involved." 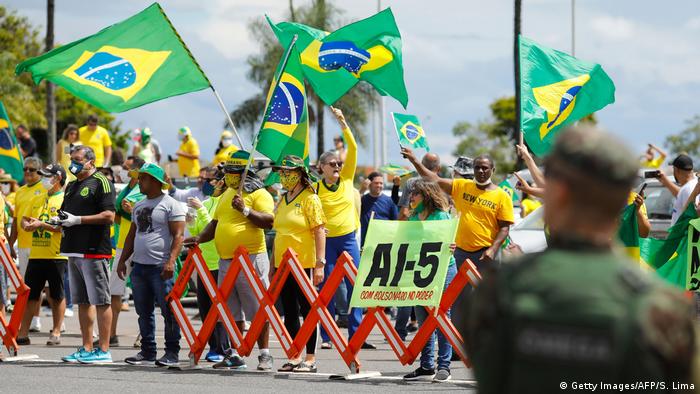 Bolsonaro supporters have demanded a return to military rule

The same day, Defense Minister Fernando Azevedo e Silva, himself a high-ranking general, announced that Brazil's armed forces would "always honor the constitution." Fico says such general statements show a vague support for democracy. "But this is more of an impression than a certainty," he adds.

According to the historian, it remains unclear how Brazil's army now views the military junta that once ruled the country. "They never asked for forgiveness or recognized the serious human rights violations [of this period] — on the contrary, the military defends the dictatorship to this very day," he explains.

Indeed, the country in general has never really processed and reflected on its military dictatorship, argues Annette von Schönfeld, who runs the Heinrich Böll Foundation's Rio de Janeiro office. "However, I doubt if the protesters would be open to confronting the past and potentially revising their position," she says.

She believes since coming into power, Bolsonaro has been systematically pushing boundaries. "Bolsonaro says unspeakable things, which he then takes back a day later — but this establishes a certain discourse and that is highly dangerous," she says.

She is deeply concerned about the military's half-hearted response to Bolsonaro's position. "It is not quite certain how clear the rejection of authoritarian structures is in some parts of society, and what side the military would take. Clearly distancing itself [from the president's stance] would have been better."

The fact that Bolsonaro can test moral boundaries without suffering any serious consequences is a clear demonstration of his power, according to von Schönfeld. Some politicians and civil society actors have lambasted the president's authoritarian tendencies on social media, yet this has not diminished his political clout. "In other countries there would be demands for his resignation, but not here," she adds.

Other institutions working for democracy

Anja Czymmeck, who heads the Konrad Adenauer Foundation's Brazil branch, says she has great confidence in the stability of the country's democratic system. The reasons for her confidence, she says, are that individual governors and mayors have the power to enact their own measures to tackle to pandemic, and that Congress is entirely independent.

"The defense minister's reaction shows that the military wants peace and stability as enshrined in the constitution," she claims. "And the military in the cabinet have been working as such. The institutions are working."

Indeed, on April 21, the Supreme Court launched an investigation into the anti-democracy protests. Justice Alexandre de Moraes said that "the democratic state of Brazilian law and its republican institutions" had been violated, in a note released by the court.

Historian Fico believes only a small minority of Bolsonaro's supporters are genuine radicals. "Even so it has a certain symbolic dimension when the president repeatedly meets with protesters who hold up such [anti-democratic] banners," he adds.

Fico is convinced that Bolsonaro's radicalization shows how fragile his grip on power actually is. "I think the president is very concerned that he could be impeached, which is a very real possibility today."

This prospect could become even more likely if his approval ratings continue to fall. Currently Fico puts them around the 30% mark. A deep economic recession, which looks probable with the COVID-19 crisis persisting, would harm him too. Experts believe the economy could shrink by up to 5% and lead to several million more unemployed this year alone.

"Military figures would not intervene to stop such [an impeachment] process," Fico says. If Bolsonaro were removed from office, Vice President Hamilton Mourao — incidentally a high-ranking general — would succeed him.

Anti-lockdown protests in Brazil, Germany and US

Former anti-corruption judge Sergio Moro has quit, accusing the president of meddling with law enforcement. He said the president tried to force him to sack his chief of police, adding he needed "autonomy" to operate. (24.04.2020)

Too high a dose of the anti-malarial agent chloroquine can cause severe cardiac arrhythmia in certain patients. Tests on COVID-19 patients in the United States and Brazil have shown increased fatalities. (22.04.2020)