Former anti-corruption judge Sergio Moro has quit, accusing the president of meddling with law enforcement. He said the president tried to force him to sack his chief of police, adding he needed "autonomy" to operate. 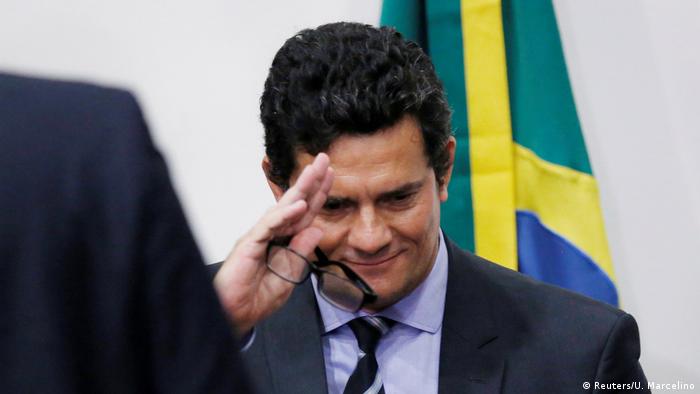 Moro, a former judge famous in Brazil for spearheading the country's anti-corruption campaign, made the announcement after Bolsonaro changed the head of the federal police's chief in the midst of the new coronavirus outbreak.

Moro said Bolsonaro had insisted on firing Chief Mauricio Valeixo without agreeing to a replacement of a similar technical profile.

He said he had warned the president that removing the chief without reason would amount to political interference. Moro said Bolsonaro did so anyway without consulting him, also taking it as evidence he was no longer wanted in the position.

The minister said he could not do his job as justice minister without "autonomy" for the force.

Bolsonaro dismissed Moro's allegations as "baseless accusations" during an address to the nation. The Brazilian president defended himself, saying he had never interfered in police investigations and that his office had the power to replace the federal police chief at his discretion.

Public security lawmakers immediately issued a statement saying Bolsonaro's "intransigent posture" has caused him to lose one of his biggest allies.

The resignation of the popular minister — the second departure of its kind in less than two weeks after Health Minister Luiz Enrique Mandetta was fired by Bolsonaro on April 16 — sent Brazil's stock market into a sharp fall of more than 8%, while the real currency dropped to a record low against the US dollar. Mandetta's profile had been boosted during the coronavirus pandemic, with his grounded scientific health advice to the public standing in sharp contrast to Bolsonaro's repeated attempts to downplay the seriousness of the virus.

Ousted federal police Chief Valeixo had worked closely with Moro in the ongoing Operation Car Wash corruption investigation until the end of 2018 and followed him when Moro joined Bolsonaro's new administration.

The Car Wash probe, dubbed to be one of the world's biggest anti-corruption investigations, centered largely on the Brazilian construction conglomerate Odebrecht and involved at least 11 countries, mostly in Latin America.

Moro initially led the investigation as a judge and collaborated with the Curitiba Branch of the Federal Police alongside Valeixo.

The probe resulted in a wave of arrests and saw the imprisonment of a number of well-known politicians and businessmen including former presidents Luiz Inacio Lula da Silva, Michel Temer and Fernando Collor de Mello — as well as the CEO of Odebrecht.

Moro and the Odebrecht scandal were also components in the process that led to the impeachment of former President Dilma Rousseff in 2016.

The sprawling Operation Car Wash transformed Moro into a national hero for many Brazilians, earning him the reputation as a crusader against corruption. For others, he is considered as an anti-left fanatic.