It's not unsual for Brazil's football fans to be the center of attention. But since Jair Bolsonaro has been president of the country, everything has changed. Now, ultras are leading protests against the president. 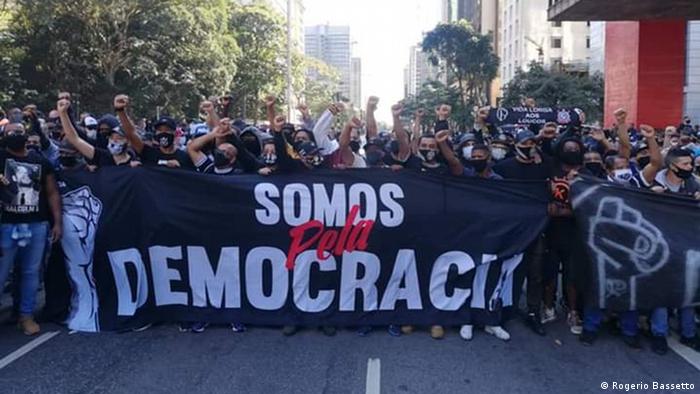 They are often defined by their opposition to each other. But what would have to happen for rival football fans to come together?

In Brazil, a man like Jair Bolsonaro has to come to power. Or, as Rogerio Bassetto says: "Our president is a homophobic racist and we all have to stand up to this enemy of humanity!"

Bassetto has been a fan of one of Brazil's most famous clubs, Corinthians, for 40 years. He is a football fanatic, who, aged seven, was already wearing the club's black and white colors in the stadium. Bassetto believes Corinthians picked him, and not the other way around.

He has not become one of the most recognizable faces in Brazil because of his love for football though, but because he the leader of the protests against President Bolsonaro. In doing so, he has won the support of fans from arch-rivals Palmeiras, Sao Paulo and Santos. The ultras from the four biggest clubs in Sao Paulo have demonstrated against the country's leader. Even fans of teams from the favelas have been among the protests for weeks. Which club do you support? It doesn't seem to matter, the main thing is to be against the right-wing. 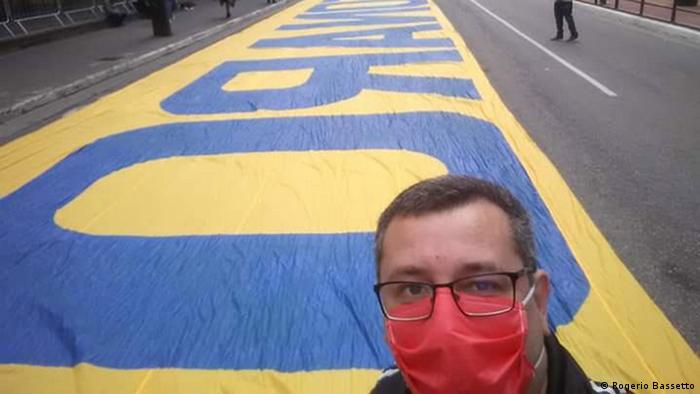 "I just called up the fans who I thought would have the same political views as me," explained the sociologist, who sees himself as far left and a passionate supporter of the Brazilian labor party, PT. Bassetto can talk himself into a rage when he talks about the coup against former president Dilma Rousseff, who lost her position in hugely controversial circumstances in 2016.

And since Brazil's left can't seem to stand up against the controversial president, the football fans have stepped in. "Many union and party members are silent. They are afraid. In contrast, Bolsonaro embodies power and energy. You always see his supporters on the streets."

Now, Bolsonaro has to deal with thousands of Corinthians fans like Bassetto. The "Gaviões da Fiel" (Hawks of the Faithful)  are Corinthians' ultras, founded 50 years ago during the resistance of a bloody military dictatorship. Around that time in 1969 the club's motto, that still stands today, was formed: "Ganhar ou perder, mas sempre com democracia" ("Win or lose, but always democratic"). 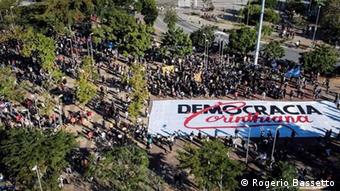 "It's our historic legacy. Corinthians is a team of the people and we are not normal fans. We are different. We are non-conformists and we cannot accept any injustice," Bassetto says proudly. The most famous player in the seven-time champion's history personifies the DNA of the working-class club.

Socrates, former captain of Brazil, was a qualified pediatrician and Marxist, who during his playing days at the club brought the so-called "Corinthians democracy" into life: Everyone at the club has a voice, from the groundsman to international stars.

Fans include Luiz Inacio Lula da Silva, who started as a shoeshiner but became union boss and then president of the country, and folk hero and three-time Formula One World Champion Ayrton Senna. The driver's posthumous foundation has since been a force for major social change.

Bolsonaro's failure with the pandemic

The contrast to the man who, despite the coronavirus pandemic and having to quarantine himself, has continued to belittle two million infected and 80,000 deaths is striking. He is also currently having to ward off a 35th proposal for impeachment. 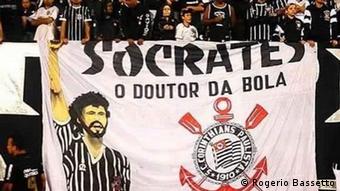 Legendary player Socrates played for the club between 1978 and 1984

"An entire country is being held hostage by the Bolsonaro movement. Today's rulers are hate and polarization. But people voted for him, so they have to deal with the consequences," the Corinthians fan said, with little sympathy for his fellow citizens. One thing is clear for Bassetto though: "It will take a long time for us to recover from the damage Bolsonaro has done."

Aid package for those in need in the favelas

Until then, it's time to not just sew the flags against Bolsonaro but also help the poorest of the poor. Bassetto and his allies from "Hawks of the Faithful" have already delivered 4,000 aid packages to the favelas of Sao Paulo, bringing people who have lost their job because of the coronavirus pandemic, shirts, clothes and socks to wear. "We are motivating others to help to do good," said Rogerio Bassetto. Social work has always been a part of being a member of "Hawks of the Faithful".

On Wednesday, Corinthians will play arch-rivals Palmeiras. Bassetto won't be able to be in the stadium because of the pandemic, but that's not that important at the moment. Right now, the opposition is playing on a different field and they're called Jair Bolsonaro.

But it's impossible that Corinthians' fans won't go after Bolsonaro again. "We will have a new banner each week," Bassetto promised. "And we will bring it to a place where everyone in Sao Paulo can see it."

Brazil - Denial on a pandemic scale

Brazil – Denial on a pandemic scale