Schadenfreude in Brazil as Jair Bolsonaro gets coronavirus

Many Brazilians say Jair Bolsonaro's positive COVID-19 result serves him right after he downplayed the dangers of the coronavirus pandemic. Shockingly, the president could receive a political boost from his infection. 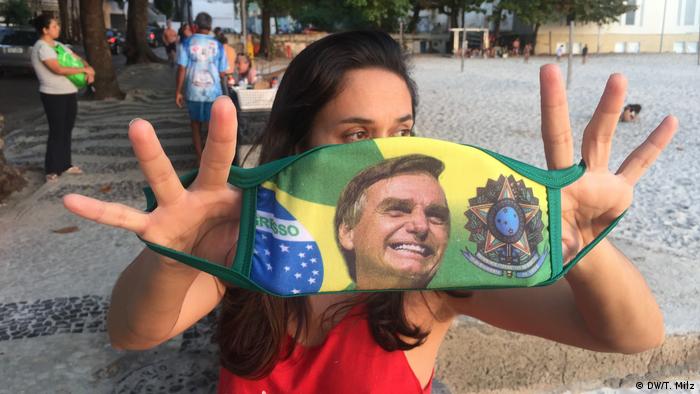 On Tuesday, several passersby on the streets of Rio de Janeiro said Brazilian President Jair Bolsonaro had it coming when he was diagnosed with COVID-19 this week. "My name's Messiah, but I can't work miracles," the president said in late April, when a total of 5,000 coronavirus deaths had been recorded in Brazil — a reference to his middle name, Messias. His remarks were a slap in the face for people who had lost loved ones or were struggling with COVID-19 themselves. Now that Bolsonaro has contracted the virus, many Brazilians feel a sense of schadenfreude.

"He's paying the price for saying the things he said,"  a man who identified himself as retired told DW. "It's his turn now," he said.

A nurse who overheard the conversation said: "I hope he dies." She added that she hopes that Bolsonaro will suffer as other Brazilians have during the pandemic. The population has largely been left without ventilators and drugs. "His death would be fair," she said. "Nobody on this planet would miss him — goodbye Bolsonaro!"

Two-thirds of voters in Rio de Janeiro had backed Bolsonaro during Brazil's 2018 presidential election. Now, however, public opinion has shifted dramatically. By Wednesday, the state of Rio de Janeiro had recorded more than 10,0000 COVID-19 deaths. It appears that most residents of Rio have lost faith in their leader. Some said they believed that Bolsonaro had made up his infection to distract from his inability to govern. "This is all just marketing," Ricardo Jose da Silva told DW. "I no longer trust him."

Officially, Brazil is approaching 70,000 COVID-19 deaths and more than 1.6 million people are infected, but, with testing low, researchers estimate that the true figures are higher. Since the  pandemic began earlier this year,  Bolsonaro has downplayed the  coronavirus, calling it nothing more than a "little flu." He refused to take measures to contain the virus and undermined the work of mayors and governors who had sought to do so.

Bolsonaro fired two health ministers with whom he disagreed about the coronavirus pandemic and the effectiveness of chloroquine and hydroxychloroquine — antimalarial drugs that the president has labeled a godsend, though various public medical institutions around the world have warned against their use to fight COVID-19. Brazil has been without a health minister since May.

For now, a military general without any medical experienced is temporarily in charge of the Health Ministry. In light of the fact that more than 1,000 Brazilians are dying each day from COVID-19, many people feel that the government has declared war on the population.

Political rivals such as Sao Paulo Governor Joao Doria have wished Bolsonaro a speedy recovery, as have many journalists who are normally otherwise critical of the president. But certainly not all have. Helio Schwartsman,  an editor at the daily Folha de S. Paulo, sparked uproar when he wrote an opinion piece titled "Why I Hope Bolsonaro Will Die." In the article, Schwartsman argues that "the president would do his country a greater service by dying than he has done by being alive." 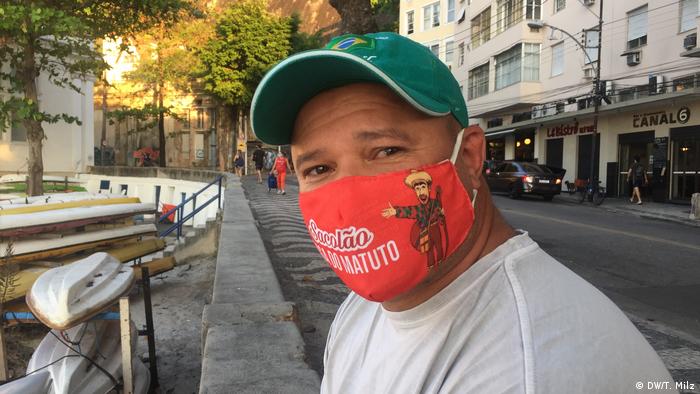 "I no longer trust him," da Silva said of Bolsonaro — doubting that the president might even be sick

Bolsonaro has been lambasted on social media, as well. According to the digital-monitoring platform Torabit 84% of tweets that referenced Bolsonaro on Tuesday were critical or negative. The #ForcaCovid and #ForcaCorona hashtags — which roughly translate to "be strong,” COVID or corona — made it to the top of Twitter's global trending topics.

In contrast, the #ForcaBolsonaro, or "be strong, Bolsonaro," hashtag only briefly trended within Brazil. One supporter of the president called for others to pray on his behalf, writing that "the force of people wishing for Bolsonaro's death will not be stronger than the prayers of millions of Brazilians who support their president; we will overcome this wave of hate."

Oliver Stuenkel, a political scientists with the Getulio Vargas foundation in Rio de Janeiro, told DW that the situation could play out to Bolsonaro's advantage. "Of course, the president assumes he will not get very sick,” Stuenkel said, "and he will use this to show that COVID-19 doesn't pose a serious danger to Brazilians." 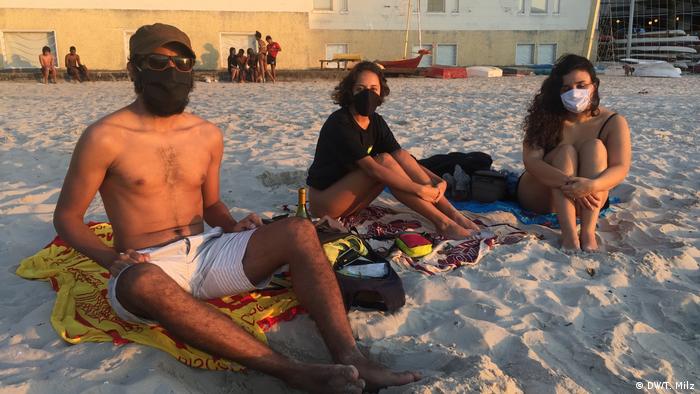 Rafael, Marina and Tatiana enjoyed a day at the beach and wished Bolsonaro the worst

Stuenkel said Bolsonaro would most likely talk up chloroquine and claim that it could save patients from serious health issues. On Tuesday, in fact, the president published a video showing him take a hydroxychloroquine tablet and proclaim: "I'm already feeling better, so it must be working."

Many revelers at the beach in Rio de Janeiro on Tuesday were not feeling especially sympathetic toward Bolsonaro. "I wish him death just as much as he is wishing it on the Brazilian people," Rafael, a teenager, told DW. "To see my country under control of such a psychopath really worries me," he said. Marina and Tatiana, who were accompanying Rafael, agreed. They said they hoped that Bolsonaro would experience firsthand what it means to contract this "little flu."