A special deployment of Brazil's elite National Police Force has begun patrolling Ceara state in a bid to stop a major spike in violent gang attacks. The violence is a test for newly elected President Jair Bolsonaro. 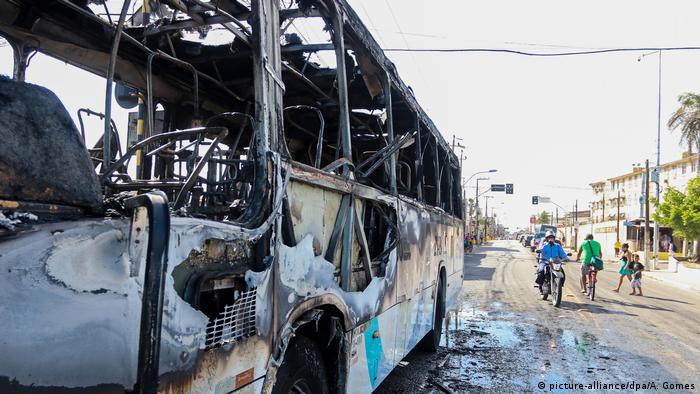 Troops from Brazil's National Police Force are being deployed in the northeastern state of Ceara with orders to end a wave of violent attacks by criminal gangs against banks, buses and shops, local officials said Saturday.

Close to 300 members of the force arrived in the state capital, Fortaleza, and more than 10 other cities across Ceara on Friday in a bid to halt the rampage which has spiked over the past four days, national Public Security Secretary Guilherme Teophilo said, according to the government news agency Agencia Brasil.

Brazilian media have shown security footage of service stations being torched by gang members in Fortaleza.

Troops were deployed after Justice Minister Sergio Moro concluded Ceara police were overwhelmed. More than 50 suspects have been arrested since the violence broke out.

The deployment is the first test for President Jair Bolsonaro and his strict law-and-order platform since he took office last Tuesday.

While the trigger for the wave of violence is still being investigated, officials suspect the vicious attacks were ordered by organized crime gangs in retaliation for government plans to impose tighter controls in the state's prisons, according to intelligence reports published in local media.

Changes are set to include blocks on mobile phone signals and an end to a policy of separating prisoners according to gang membership.

In a bid to crack down on Brazil's rampant crime, the far-right president has extended immunity to soldiers and police using lethal force. He has also made a move to ease gun laws so "good citizens" can confront armed criminals.

The 63-year-old former paratrooper has made "restoring order" the main feature of his four-year term.

Brazil has the third-highest number of inmates in the world, behind the United States and China, with close to 730,000 prisoners as of 2016. Jails are overcrowded, with gangs often violently turning on each other.

Jair Bolsonaro's stance on indigenous people is 'discriminatory and racist'