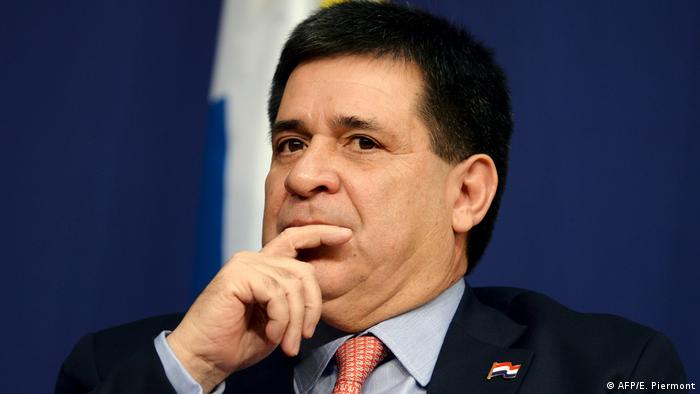 Brazilian authorities issued an international arrest warrant on Tuesday for Horacio Cartes, demanding that the former president of Paraguay be extradited to Brazil as part of an investigation into money laundering.

"In Paraguay, there are no untouchables. Everyone should be accountable,'' current Paraguayan President Mario Abdo Benitez told reporters on Tuesday.

Benitez said that he would evaluate Brazil's accusations against Cartes.

A Brazilian judge alleged that Cartes, who was president from 2013 to 2018,  provided $500,000 (€450,000) to a criminal organization at the request of his friend and "soul brother" Dario Messer, a Brazilian-Paraguayan money dealer who was then a fugitive facing corruption charges. The funds were allegedly to help him hide from authorities.

According to prosecutor Jose Augusto Vagos, Messer informed Cartes that he needed the funds to cover legal fees and that "it was shown that money was in fact made available.''

Messer was arrested in Sao Paulo in July this year. He is suspected of being the leader of a group of Brazilian illicit money changers who moved millions of dollars in bribes as part of the "Car Wash" kickback scheme.

Authorities are still in the process of investigating whether Cartes was a temporary or a permanent fixer of the criminal organization when providing funds to Messer.

Brazil is wanting Cartes' imprisonment on the basis that he could continue financing the criminal network, particularly members who have not yet been identified, said prosecutor Marisa Ferrari.

"There is a strong suspicion that the criminal conduct could be repeated,'' Ferrari said. "While Horacio Cartes is no longer president, he still maintains strong economic power and no less political power in Paraguay. He has diverse companies, is one of the country's wealthiest businessmen, and is a senator.''

Brazilian authorities said they had asked Interpol to send out a red notice for Cartes' arrest but did not respond to a request for information.

While his whereabouts were unknown, Cartes' lawyer, Carlos Palacios, told The Associated Press that the former president remains in Paraguay and is "at ease because he had no commercial ties to Dario Messer.''

Paraguayan prosecutors said they had not yet received the arrest warrant issued by Brazil.

What is Operation Car Wash?

The scandal, centered on Brazilian state oil company Petrobras and the construction conglomerate Odebrect, involved dozens of entrepreneurs and politicians from Brazil, Argentina, Mexico and Panama to Peru and Venezuela.

The investigation, which was initially spearheaded by Brazil's justice minister, Sergio Moro, when he was a prominent judge, revealed the scope of endemic corruption in the country and cozy relationships between the public and private sectors.