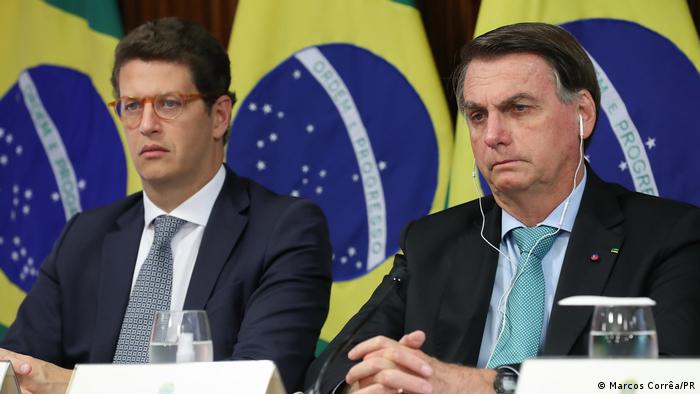 Brazilian Environment Minister Ricardo Salles announced that he was leaving his post on Wednesday as authorities investigate his alleged role in an illegal logging scheme, Brazilian media reported.

The Supreme Court ordered the investigation to go ahead last month. The minister in President Jair Bolsonaro's far-right government gained infamy for presiding over massive deforestation in the Amazon rainforest.

"We need very strong unity of interests, willpower and efforts. To make that happen as smoothly as possible, I have presented my resignation to the president, which he accepted," Salles said at a news conference.

Why Salles is being investigated

The court-ordered investigation came after police raids targeting the minister and other officials for allegedly allowing the export of illegally sourced timber from the Amazon to Europe and the US.

Bolsonaro named Joaquim Alvaro Pereira Leite as his replacement nomination for the post, the official government gazette reported. Salles, one of the more controversial figures in Bolsonaro's government, had held the position since January 2019.

Salles had also acted as the leading negotiator with US officials regarding plans to fund preservation of the Amazon. He defended his record on environmental issues by saying he had sought a balance between economic interests and natural wonders.

Destruction in the Amazon

A report by Global Forest Watch released earlier in the year revealed that Brazil witnessed a surge in deforestation in 2020, losing an extra 15% of primary forest in comparison to the previous year.

Research carried out by Brazilian officials also found that logging, land clearing and fires between August 2019 and July 2020 had obliterated 11,088 square kilometers (2.7 million acres). The data represented a 12-year high point for deforestation.

The destruction of the Amazon is of concern for indigenous people living there, local ecosystems and for the world in general.

The Amazon rainforest plays a vital role in the world's ecology, both as a producer of oxygen and as a probable carbon sink that absorbs large amounts of the greenhouse gas carbon dioxide from the atmosphere.

Bolsonaro has pledged to continue increasing agricultural activity in the Amazon region.