League leaders Mönchengladbach are set to host champions Bayern Munich, looking to extend their lead over the Bavarians to seven points. Bayern will be looking to bounce back from their first defeat under Hansi Flick. 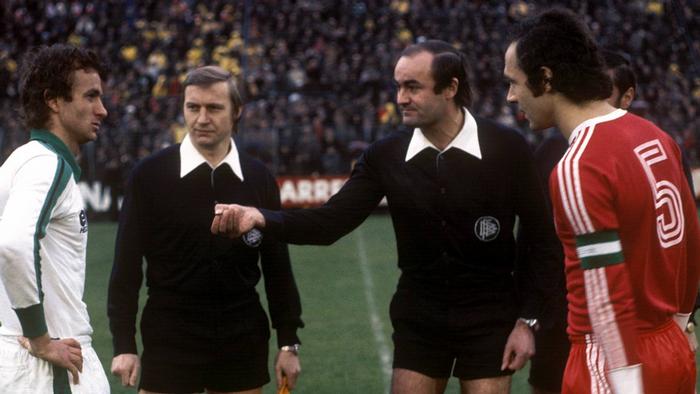 In this modern age of marketing slogans and buzzwords, the moniker "Der Klassiker" has come to refer to meetings between Bayern Munich and Borussia Dortmund.

For fans of a certain generation however, the classic fixture in German football doesn't feature the black and yellow Borussia from Dortmund, but rather their black, green and white namesakes from Mönchengladbach.

Between 1969 and 1977, Bayern Munich and Borussia Mönchengladbach shared nine consecutive Bundesliga titles between them, four for Bayern and five for Gladbach. It was a golden era for "Die Elf vom Niederrhein" — the eleven from the lower Rhineland — which also saw them win a German Cup and two UEFA Cups, and reach a European Cup final. 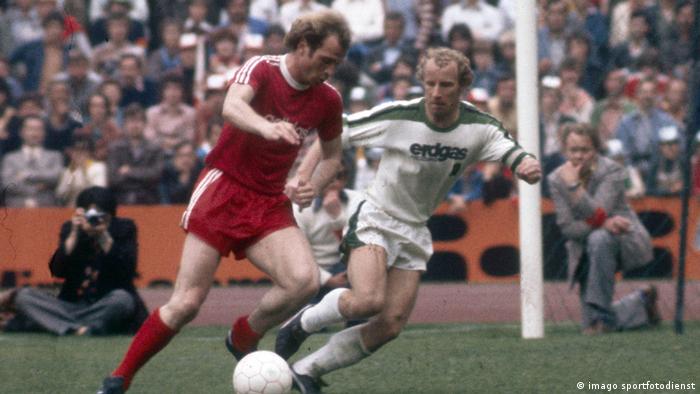 Uli Hoeness and Berti Vogts going toe to toe in 1977; Hoeness would go on to help run Bayern for decades, Vogts became the first coach of a reunified German team, winning Euro 96

Since then, the two German giants have taken slightly different paths but, on Saturday, four decades on from the Foals' fifth and last league title, Gladbach will welcome Bayern as league leaders for the first time since December 1976. It's an "eternally young" rivalry, as Kicker magazine put it on Thursday, an "old Klassiker" but a "modern hit."

Several teams have profited from Bayern's stuttering and spluttering start this season, including RB Leipzig, Schalke and constant over-achievers Freiburg, but none have capitalized as much as Gladbach, who have hit the ground running under new head coach Marco Rose — particularly at home.

The Foals have only dropped five points at Borussia Park all season and go into Saturday's game on the back of six straight home wins — including victory over Roma in the Europa League. Rose's team press aggressively as a unit and break rapidly, bringing into play an array of attacking talent which few other Bundesliga outfits can match. 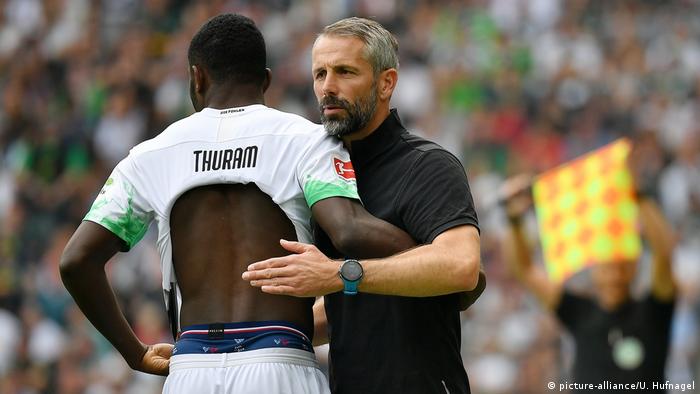 French striker Marcus Thuram, son of French World Cup winner Lilian, has been one of signings of the season while Breel Embolo, after an unsatisfactory spell at Schalke, has developed a good understanding with winger Patrick Herrmann, the pair combining to score three of Gladbach's four goals in Sunday's 4-2 win over Freiburg.

"Borussia's playing style is vertical; they always drive forward when they have the ball," wrote the local Rheinische Post this week. "But the secret to their success so far has been the depth of the squad." Indeed, the Gladbach bench against Freiburg was just as impressive, featuring last season's club top scorer Alassane Plea, captain Lars Stindl, 2014 World Cup winner Christoph Kramer and Brazilian veteran Raffael.

The highly personable Rose is having a positive effect off the pitch as well. The Leipzig-born 43-year-old spent Wednesday visiting children at a local hospital and club employees report that the atmosphere around the club has rarely been better.

"I think everyone can see what we're trying to do as a team," he told journalists on Thursday. "We're feeling confident at the moment, but we know that there will be phases where things don't fall together as easily."

Heynckes: Flick is the man for Bayern

Bayern Munich will be hoping to usher in precisely such a phase on Saturday when they arrive in the Rhineland under their own new coach. After taking over from Niko Kovac, Hansi Flick won his first four games in charge in all competitions by a combined score of 16-0 but suffered his first defeat at home to Bayer Leverkusen last weekend.

Much of Flick's initial success in Munich has come from following a similar recipe to Rose in Mönchengladbach. Tactically, Bayern have benefited from a higher, better coordinated and more aggressive defensive line while Flick's man-management has also come to the fore. Flick enjoyed a smooth start with Bayern, although Leverkusen dealt him defeat in Munich last weekend

For Jupp Heynckes, Bayern's 2013 treble-winning coach, that's not a surprise. "He's not the boss because of his job title but because of his personality," Heynckes wrote as part of a glowing tribute in this week's Kicker.

But Flick is more than just a nice bloke; the 54-year-old has a wealth of top-level coaching experience including eight years as Joachim Löw's assistant with the German national team.

"His contribution to the 2014 World Cup win is greatly underestimated," insists former Germany international Per Mertesacker, while Heynckes already recognizes Flick's fingerprints on Bayern's game and insists he could be the man for Bayern for the long term.

"Hansi Flick is predestined for the role of Bayern coach," he wrote. "He is a jewel of a coach. Such talent must be acknowledged and nurtured."

Heynckes, of course, doesn't only enjoy legendary status at Bayern Munich, but at Borussia Mönchengladbach as well, where he played a leading role in four of those five Bundesliga triumphs — in 1971, 1975, 1976 and 1977.

The 74-year-old will be following the Bundesliga's original "Klassiker" with added interest on Saturday.

Robert Lewandowski leaves Bayern Munich at the top of his game 16.07.2022

Most footballers leaving Bayern Munich at 33 would be winding down their career, but Robert Lewandowski remains at the peak of his powers. He signs off at Bayern with 50 league goals after another relentless season.

Bundesliga runners-up Borussia Dortmund have decided to part ways with head coach Marco Rose after just one campaign. The decision follows post-season discussions regarding the future of the club.