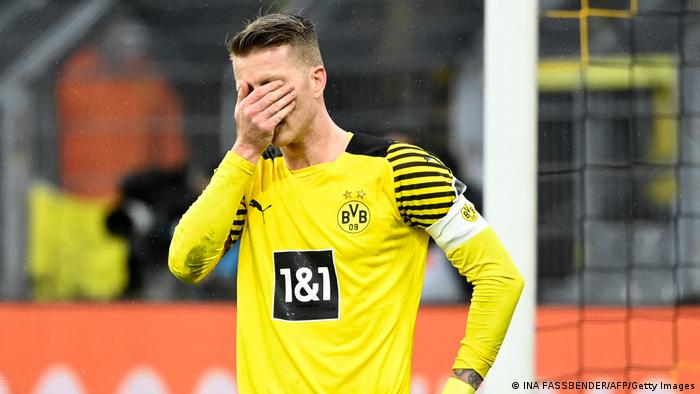 Marco Reus was unable to influence the game at all

Marco Rose and his coaching staff seemed to know the third Leverkusen goal was coming.

After Florian Wirtz had finished a blistering counterattack to restore Leverkusen's lead, following an early own goal exchange that seemed designed to fulfill the contractual obligation for goals in this fixture, the visitors were rampant, creating four chances to score in as many minutes.

Dortmund had been tossed a life ring, and they'd cast it aside before flailing further out of their depth and weighing down their pockets. Rose and his colleagues stared in unison at the concrete floor beneath them as Robert Andrich's freekick struck the blow.

But it could've been anyone, such was Dortmund's disarray.

Dortmund's defensive woes are longstanding and clear; only four teams have conceded more than BVB's 36 in the Bundesliga this season.

Rose has had more than two weeks (not to mention the recent winter break) to address that and made the decision to drop Mats Hummels in favor of Dan Axel-Zagadou and swap his rightbacks, with Thomas Meunier picked over Marius Wolf.

The first of those decisions came undone after 10 minutes when Zagadou hesitated on the edge of his own box before playing in the lethal Patrik Schick. Goalkeeper Gregor Kobel bailed him out only to see his save deflect back in off Akanji. Meunier didn't fare much better, with Rose reversing that decision at halftime. 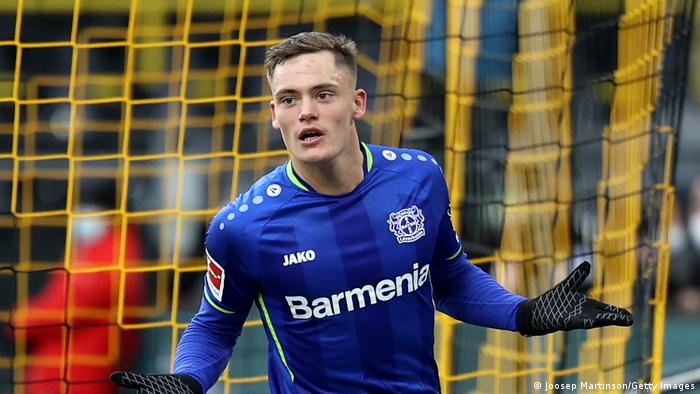 Florian Wirtz has an exceptional record against the Bundesliga's best sides

There's an element of shuffling the deckchairs on the Titanic in picking the last two elements of the Dortmund defense, with only Akanji and Raphaël Guerreiro showing anything like the form required this season. Defensive midfield also continues to be an issue, with Axel Witsel out of favor and no obvious solution having presented itself.

So it wasn't just the third goal that had been telegraphed. Dortmund snuck past Hoffenheim by scoring three times from their two shots on target last time out and needed two very late goals to overcome a deficit against Eintracht Frankfurt two games before that. No team can score three or four to dig themselves out of such holes every week.

But Dortmund didn't even look like doing that at any stage on Sunday, with Erling Haaland's injury absence felt keenly.

The 10,000 fans allowed in after the club successfully protested the COVID-19 stadium ban with the state of North Rhine-Westphalia had seen their team muster just one solitary shot from distance in the first half. Hopefully they weren't just coming for the game.

"A disastrous day for us," admitted captain Marco Reus afterwards to DAZN. "All in all, we offered too little. We didn't implement the instructions and always say the same thing. We have to bring that onto the pitch and we didn't manage to do that today."

For all Dortmund's shortcomings, few teams have been able to expose them as ruthlessly and consistently as Leverkusen did on Sunday. If the 3-4 loss in the reverse fixture was a chaotic game that could've swung either way, this was a surgical dismemberment.

Wirtz's goal and Moussa Diaby's late fifth were the cleanest examples of the ease with which Leverkusen were able to get from their own box to Dortmund's with three or four vertical passes. Mahmoud Dahoud is a classy passer but has little defensive nous, while Jude Bellingham is starting to look, understandly, like a teenager asked to carry too much weight. Because he is.

But, as swashbuckling as they can be, Gerardo Seoane's side are capable of going from the sublime to the ridiculous too, which is why they still sit five points behind their opponents, though their grip on third is tightening.

The answers for Dortmund are not clear. That they can be as poor as this, and lose more games than Cologne and Union Berlin, and still be comfortable in second, is a clear indication of their status as undisputed number two in Germany. They now sit nine points off Bayern Munich but it may as well be 90. The Bavarians are in a class of their own.

So too, in a different way, are Dortmund. The gap in resources between BVB and Bayern makes a sustained long term challenge difficult while they, in turn, are in a much better position than the rest of the league.

It's a tough spot for a coach in many ways. Wins are expected and any defeat can soon become a crisis. The odd loss is acceptable, but a humiliation at home is not, as Lucien Favre found out when he paved the way for Rose to move to Dortmund by paying for a 5-1 mauling by Stuttgart with his job.

Sporting director Michael Zorc insisted in the week that Rose is not about to suffer the same fate and that his appointment is one for the long term. Which is a good thing, because the short term looks grim indeed.

Borussia Dortmund had goalkeeper Gregor Kobel to thank as they held on to beat Bayer Leverkusen. Marco Reus scored the winner, but injuries to new arrival Karim Adeyemi and others are tempering expectations.