With the sale of its rail unit, the Canadian company has gambled on its private jet business for survival. Why is Bombardier betting it all on a mode of travel that is constantly disparaged by climate change activists? 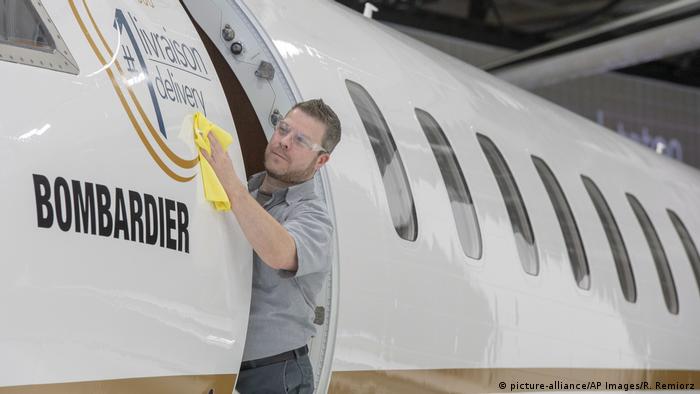 Bombardier is selling its rail business to French train manufacturer Alstom for as much as €6.2 billion ($6.7 billion) as it seeks to cut its massive debt load following years of pumping cash into its aviation units.

The sale means Bombardier — which quit commercial aviation earlier this month after selling its remaining stake in the A220 jet program to Airbus — is betting everything on its private jet business for future growth, thereby exposing itself not only to the vagaries of the cyclical nature of the corporate jet market but also to a possible fall in demand resulting from climate-related flight shaming.

"The very rich exist outside any regular social norms or frameworks or rules. So, in my opinion it might even be a smart move to focus on that market because it's a guaranteed market," Stefan Gössling, a sustainable tourism and transportation expert and professor at Sweden's Lund University, told DW. "History has shown that they are not affected by the usual problems that befall other people. They have vast resources and they can spend them on private travel."

Bombardier, which has a whole new lineup of private jets and an order backlog running into billions, expects to boost market share as businesses and the global super-rich upgrade to more luxurious, efficient and longer-range aircraft.

Nearly 8,000 new private jets, valued at $248 billion, are expected to take to the skies over the next 10 years, according to a report by Honeywell Aerospace. This despite the jets being a constant target of ridicule by environmentalists and climate change activists for emitting disproportionate amounts of carbon dioxide.

Experts say flight shaming, which largely remains a European phenomenon, has so far failed to make any significant impact on the business jet market. Annual deliveries rose 15% in 2019 to 799 aircraft, analysts at consultancy Ascend by Cirium said.

"It [flight shaming] hasn't really been discussed much in North America, and the best growth markets — the Middle East and Asia — have really not seen any discussion of it at all," Teal Group aviation analyst Richard Aboulafia told DW. "Unless that changes, Bombardier's new position probably isn't at risk. They're mostly focused at the high-end of the market, which is proven to be a lot more resilient in the face of market headwinds."

The United States, which is the biggest private jet market by far, and China are expected to account for almost two-thirds of the deliveries between 2020 and 2029. Europe will account for a fifth of the new aircraft sold.

Aviation analyst Brian Foley says flight shaming might lead to a change in the way people use business jets.

"If people are truly concerned, they may, instead of having their own aircraft, share a chartered aircraft with someone else to try to reduce the usage," Foley told DW. "So, there will be a shift in the way people use jets but there won't be a reduction in sales."

The public calling out of the alleged hypocrisy of the global elite arriving in private jets for global summits focused on climate change or sustainability hasn't really gone unnoticed by the plane makers. Bombardier and rivals, including Cessna and Gulfstream, have joined hands to promote the use of sustainable fuels and carbon offsets.

"Sustainability is a key issue in our industry, and it's important to note that business jet emissions account for only 0.04% of total annual carbon emissions globally," Louise Solomita, a Bombardier spokeswoman, told DW. "Incidents of flight shaming involving the use of private jets are unfortunate when you consider that our industry has delivered fuel efficiency improvements of 40% over the past 40 years."

"Just because not very many people can afford to travel by private jet (and therefore it represents only a fraction of total aviation emissions) does not mean that the activity is not disproportionately carbon intensive, consuming a disproportionate amount of our global carbon budget," Leugers told DW.

Experts say Bombardier did not have much of a choice with $9 billion in debt maturing over the next decade. The company was reported to have been seeking buyers for both its train and business jet businesses and it just happened so that the rail unit attracted a buyer first.

But could becoming the only pure-play business jet maker by ditching the much greener and sustainable train business make Bombardier a go-to punch bag for climate change activists in an era of flight shaming? Experts disagree.

"It's obviously not the best move by Bombardier to step away from high-speed railways, but we should ask this from a broader perspective, we should ask what's wrong with the whole sector and not just one company," Gössling said. "I wouldn't say it's Bombardier's fault. It's actually a governance failure. It's because governments have decided to subsidize air travel rather than high speed railways."

Shame may not be the most efficient fuel to spur action against climate change, says DW's Kate Ferguson after attending Germany's first national aviation conference in the eastern city of Leipzig. (30.08.2019)