Bolivia descends into chaos ahead of elections

Some had hoped interim President Jeanine Anez would return the country to normality. Yet, unfortunately, her time in office has only deepened Bolivia’s polarization. 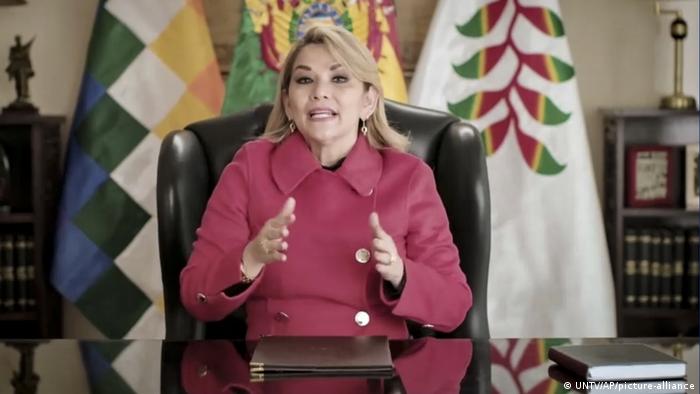 With roughly one month to go until the Bolivian general election, the country is descending into violent political strife. On September 20, for instance, Miguel Roca of the centrist Comunidad Ciudadana party was pelted with stones in the city of La Paz. That same day, supporters of the country’s left-wing Movimiento al Socialismo party were prevented from holding an election rally by thugs. Several days earlier, supporters of both parties had engaged in street fighting in the city of Oruro — the same city where on September 17, Luis Fernando Camacho of the right-wing Creemos party was attacked with stones.

The October 2019 elections led to weeks of protests due to accusations of irregularities, leaving 35 people dead and 800 injured. One can expect that the upcoming election on October 18, could precipitate similar violence. Bolivian society, after all, has become deeply polarized. So much so that the United Nations Commission on Human Rights (UNCHR) along with the National Electoral Court of Bolivia have urged all political actors to ease tensions and refrain from violence.

Then, he was suddenly replaced by interim President Jeanine Anez and her right-wing allies. Morales was forced into Argentinian exile. Anez, meanwhile, is going after Morales’ supporters and has launched legal action against the former president, accusing him of terrorism. All this, unsurprisingly, has led to further instability, strife and chaos.

It has become practically impossible to find someone who will offer an objective take on the country’s current political situation. Fortunately, Cesar Munoz of Human Rights Watch (HRW) is a rare exception. Munoz is a Spanish national and has worked with the non-governmental organization (NGO) for six years. In his latest HRW report, he paints a bleak picture of the country’s status quo.

Based on interviews with 90 lawmakers, human rights activists and people who witnessed acts of violence, Munoz argues that Bolivia desperately needs to reform its judiciary: "It needs an independent judiciary that is not instrumentalized to persecute political enemies and abused as a political weapon."

Similarities with the US

Evo Morales, like US President Donald Trump, created a deeply polarized society where those on either side of the political spectrum treat each other with disdain and malice. Both have produced societies where critical news organizations are bullied and vilified.

There are indeed striking similarities between Bolivia and the US today — even though ex-President Evo Morales, a staunch socialist, would be loath to admit it. In both countries, the judiciary is being leveraged to gain political advantage. "Evo systematically weakened the judiciary by installing his own allies in key positions," says Cesar Munoz. "He permanently attacked the press for no reason, and curtailed the rights of civil society organizations and human rights activists."

Anez, who declared herself Bolivia’s interim president on November 12, could have embarked on a different course. She could have endeavored to protect citizens‘ human rights and strengthen the judiciary’s independence. Instead, the former second vice president of the Senate opted to go after Morales and his supporters.

Anez launched a callous retaliation campaign, as the case of Patricia Hermosa — Morales’ former cabinet chief and lawyer — illustrates. Hermosa was accused of terrorism, terrorist financing and sedition, and jailed. The only evidence cited against her was a phone call with the former president. Moreover, Hermos was arrested despite being pregnant — a clear violation of Bolivian law. Without medical support in jail, she lost the child. But even then she was not freed, with the state judge telling her she was now no longer pregnant. HRW has documented her case. Munoz says Hermosa was subjected to a spate of "absurd and outrageous human rights violations."

Cesar Munoz has read the 1,500-page indictment against Evo Morales accusing him of terrorism and terrorist financing. "We found zero evidence of him having conducted acts of terrorism," says Munoz. The whole case "is based on private conversations that Morales had in which he said unsettling things." But Munoz says none of this justifies a possible 20-year jail sentence.

After taking power, Anez immediately passed a decree granting legal immunity to security forces who committed acts of violence against protesters. Roughly one year has passed since the violent clashes of October and November 2019, that left many dead — yet so far none of the culprits have been brought to justice.

Officially, protesters attacked and killed each other, without any involvement of security forces. No weapons, however, were found on any of the deceased. And dozens of witness reports indicating state forces committed the murders have been ignored.

Anez has added fuel to the fire by warning that Bolivia’s democracy is at stake and that Evo Morales could return to reinstate his dictatorship. On top of this, Bolivia is already struggling with a strained health care sector and thousands of coronavirus-related deaths. The country’s future, in other words, looks grim.

This article was translated from German by Ben Restle