Boko Haram militants have killed four people in an attack on a food convoy carrying aid to displaced civilians in Nigeria. Some 8.5 million people in the conflict region are in need of humanitarian aid. 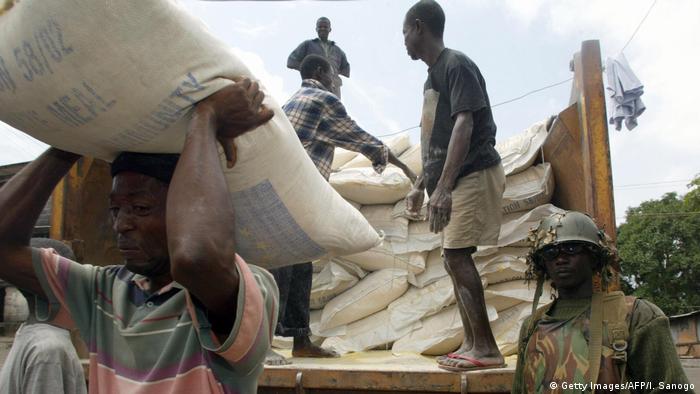 The Boko Haram attack occurred on a main road southwest of Gamboru, a town on the border with Cameroon where thousands of displaced civilians rely on humanitarian aid.

"WFP can confirm that a convoy escorted by the Nigerian military including WFP-hired trucks was the subject of an attack by armed groups 35 kilometers southwest of Ngala in Borno State on Saturday," a spokesperson for the UN food assistance organization told Reuters.

It remained unclear if the four people killed in the attack were WFP employees, or drivers and assistants of the hired trucks.

A local witness told the AFP news agency that militants stole a truck full of food and two other cars. WFP said they were trying to work with authorities to find the location of the trucks.

More than 20,000 killed in insurgency

Some 8.5 million people are in need of humanitarian aid in Nigeria's Adamawa, Borno and Yobe states, according to the UN.

Since Boko Haram began an insurgency in 2009, more than 20,000 people have been killed and some 2.6 million displaced.

The Nigerian military has repeatedly announced the final defeat of Boko Haram, but jihadis continue to carry out attacks and control large swaths of the countryside.

The 140-kilometer (85-mile) road from the Borno state capital, Maiduguri, to Gamboru on which the aid convoy was travelling was reopened in July last year after the military closed it for two years due to repeated attacks.

A teenage suicide bomber has killed at least 50 people in the northeastern Nigerian town of Mubi, with the death toll expected to rise further. Officials believe jihadi group Boko Haram is responsible. (21.11.2017)

Even as terrorism-related deaths drop dramatically in some parts of the world, fatalities in OECD countries have reached a 16-year high. Research Director of the Global Terrorism Index Daniel Hyslop tells DW why. (15.11.2017)

Taking terror out of climate change

Terrorism and climate change are widely considered as the two most significant threats of our time, but what few realize is to what extent the two are connected. (06.11.2017)