With the UN peace plan in tatters, regional battle lines are being drawn in Syria. Calls for a no-fly zone have grown, but the West remains reluctant to intervene during an election year and an economic crisis. 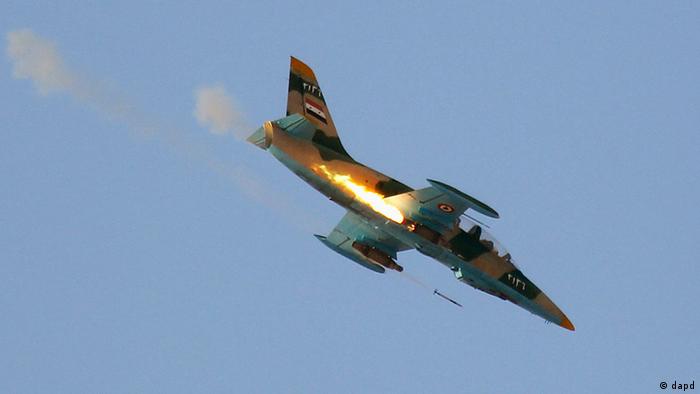 As Syria enters its 18th month of bloodshed, the conflict there has increasingly become a regional proxy war, with the United States and its allies - particularly Turkey - facing the difficult question of how to proceed in the wake of the failure of diplomacy to end the violence. 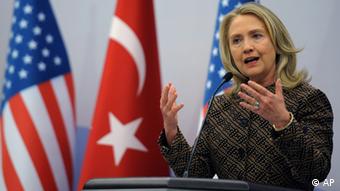 Clinton announced the creation of a working group with Turkey

US Secretary of State Hillary Clinton visited Istanbul over the weekend, where she met with Turkish President Abdullah Gül, Prime Minister Recep Tayyip Erdogan and Foreign Minister Ahmet Davutoglu to discuss what she called ways to "hasten the end of the bloodshed and (President Bashar) Assad's regime."

When asked by a reporter whether establishing safety or no-fly zones was under consideration,she indicated that both Washington and Istanbul were actively weighing the pros and cons of a military intervention.

"It is one thing to talk about all kinds of potential actions," Clinton told a press conference after her meeting with the Turkish foreign minister on Saturday. "But you cannot make reasoned decisions without doing intense analysis and operational planning. And we share not only the frustration, but the anger and outrage of the Syrian people at what this regime continues to do."

As the civil war in Syria has escalated, the humanitarian situation has deteriorated and increasingly strained the resources of neighboring countries, particularly Turkey. The UN refugee agency reports that almost 150,000 Syrians have fled their homeland since the uprising began, with at least 50,000 taking refuge in Turkey alone.

According to the UN, the widespread and indiscriminate use of warplanes and helicopter gunships by the government against rebel forces in the city of Aleppo has led to a spike in the stream of refugees. Meanwhile, Western nations have expressed concern that the Assad regime could use its alleged chemical weapons in an act of desperation, or simply lose control of them as Syria slides toward collapse.

"The range of contingencies people are discussing is very much larger and there's going to be a broader debate about responses, including a no-fly zone," Ian Lesser, director of the Transatlantic Center with the German Marshall Fund in Brussels, told DW.

Reluctance in the West

Although the resignation of UN-Arab League envoy Kofi Annan has sparked discussion among some NATO member states about using airpower to establish a no-fly zone, there's little appetite for military intervention after a decade of war in Afghanistan and Iraq.

"First of all, there's the ongoing presidential campaign in the United States and the fact now that Europe is in the midst of a major euro crisis," Fadi Hakura, an expert on Turkish politics with Chatham House in London, told DW.

"So at the current time, I do not think the conditions are right for the Western powers and its regional partners to implement - unilaterally - a no fly-zone outside of the remit of the United Nations Security Council," Hakura added. 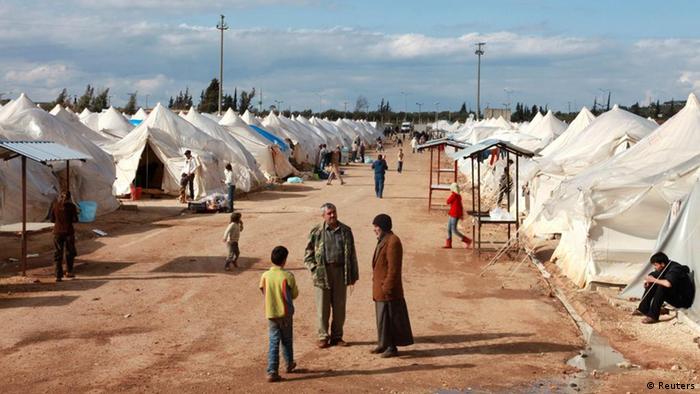 China and Russia have already used their Security Council veto power to block three resolutions aimed at putting pressure on the Assad regime. Beijing and Moscow have drawn a redline, making it clear that they will oppose any diplomatic move that could open the door to a Libya-style intervention in Syria.

"In the UN Security Council it would be very difficult to get a mandate because of continued Chinese and Russian and potentially other opposition," Lesser said. "So the notion of intervention without a solid international mandate, the enthusiasm for this is clearly limited."

According to Lesser, deadlock at the Security Council is "a complicating factor, but it's not necessarily a limiting one" for the West. Washington and its allies have the capability to intervene in Syria, as they did in Kosovo, without a United Nations mandate. But there remains a more fundamental issue of what a military intervention could realistically achieve.

"There's this big open question - politically, what can you do usefully with the use of force? It's not clear," Lesser said. "The Syrian military is by all accounts much more capable than the Libyan military."

As Western nations mull the risks of using military force, the major regional powers are already deepening their involvement in Syria's civil war. Rebel forces in Damascus kidnapped 48 Iranians earlier this month, some of whom have been confirmed by Tehran to be retired members of the Islamic Republic's Revolutionary Guard.

The Syrian opposition has long claimed that Iran and the Lebanese Shiite militia Hezbollah are providing active military support to the Assad regime. Meanwhile, the Sunni Gulf monarchies of Saudi Arabia and Qatar are reportedly supplying weapons to Syrian rebel groups. Turkey, for its part, has provided a sanctuary on its soil to the anti-Assad Free Syrian Army (FSA).

"The Syrian conflict is not really about Syria per se, but it has come to symbolize the regional struggle that is taking place between the United States, its Gulf Arab partners, Turkey, Egypt, Jordan and most of the north African countries and European partners on one side," Hakura said. "Then on the other you have Russia, China, Iran, and the Baathist regime in Syria."

The Sunni states in the Middle East are keen to hasten the collapse of the Assad regime. They are betting that by eliminating Tehran's Syrian ally, they can break the back of the "axis of resistance" - the alliance between Iran, Syria and Hezbollah.

So far, the Western nations such as the US and the UK have publicly limited themselves to providing non-lethal aid to the Syrian opposition. That aid primarily consists of communications equipment, which experts such as Hakura say is intended to strengthen and centralize the rebels' weak and chaotic command-and-control capabilities. 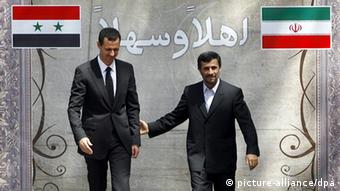 The West has acted with caution and stopped short of directly supplying the rebels with weapons out of concern that Islamist fundamentalists could be infiltrating their ranks. Both the Guardian and the Long War Journal have reported that militant groups, such as the al Nusra front, are operating with the secular Free Syrian Army. Al Nusra has alleged ties with al Qaeda affiliates that cut their teeth during the US occupation of Iraq.

Although cautious, there are certain redlines that could precipitate a Western military intervention in the Syrian civil war. Lesser says that if the Assad regime uses chemical weapons, or if those weapons fall into the hands of the aforementioned Islamist groups, Washington would likely intervene. A sharp escalation of the humanitarian crisis that destabilizes neighboring states could also mobilize a coalition of Western nations to act.

And unlike the Libyan conflict, the Syrian civil war and the resulting refugee crisis are unfolding across the border from a major NATO member state - Turkey.

"Turkey is a NATO ally," Lesser said. "If Turkey is attacked by Syrian forces, this could conceivably become a so-called NATO Article 5 contingency in which an attack on one is an attack on all."

"Turkey's NATO allies would be obliged to come to Turkey's assistance and so it would become a US military contingency as a matter of alliance solidarity," he continued. "I don't think that's likely but it's not inconceivable."

Syria is a crossroads in the Mideast, a nation where a mosaic of ethno-religious and tribal groups have loyalties that stretch across national borders into the rest of the region. The outcome of the Syrian conflict is likely to play a decisive role in the regional power game - one which is escalating.

Preparing for a post-Assad Syria

Syria's President Bashar Assad is still clinging to power. But many governments are expecting his regime to fall - and are planning for what comes next. (13.08.2012)

Hundreds of thousands of people are fleeing Syria. Given the lack of food, shelter and medical care for these refugees, aid organizations are sounding the alarm about the disastrous humanitarian situation. (09.08.2012)

The kidnapping of Iranians near Damascus has exposed the dangers of Tehran's pro-Assad course in Syria's civil war. The conflict there could ignite a spasm of Sunni militancy that threatens Iran's own Islamist order. (07.08.2012)