It is "highly likely" that BioNTech's coronavirus vaccine works against the variant detected in the UK, the company's CEO has said. If necessary, the German firm could also adapt the vaccine within six weeks. 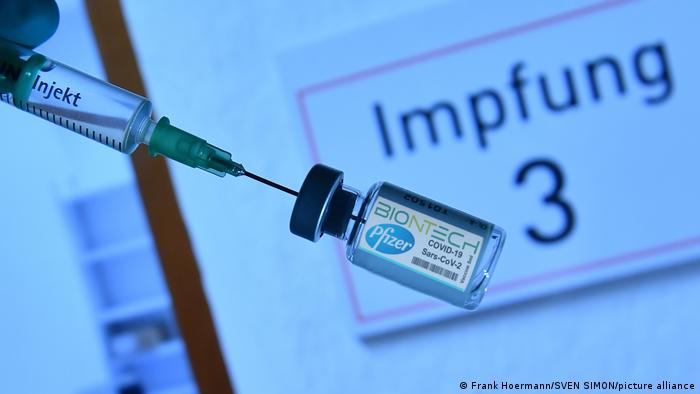 BioNTech-Pfizer will supply 12.5 million doses of their COVID-19 vaccine to the EU by the end of the year

BioNTech has "scientific confidence" that its coronavirus vaccine would also work on the variant detected in the UK, company CEO Ugur Sahin said Tuesday.

The proteins on the mutated form of the virus were 99% the same as the prevailing virus, Sahin told DW.

Sahin said his team would need around two weeks to test its vaccine on the new viral variant. "The likelihood that our vaccine works ... is relatively high," he said.

Should the vaccine need to be adjusted for the new variant, the company could do so in about six weeks, said Sahin, though regulators might have to approve the changes before the shots can be used.

The vaccine developed by the German firm together with US partners Pfizer was approved for use in the EU on Monday. BioNTech said deliveries would begin immediately.

It is to be marketed as COMIRNATY — a word construct derived from COVID-19, the virus' mRNA messenger molecule and the terms community and immunity.

Germany is set to receive its first batch of 151,000 doses on Saturday. Health Minister Jens Spahn said at least 670,000 doses would be distributed per week from January.

The BioNTech-Pfizer vaccine is also licensed in Britain, Canada and the United States.

The company, founded by Sahin and his partner and wife, Özlem Türeci, was the first to receive approval for a vaccine.

The CEO called the approval an important step to ending the pandemic, and he credited the scientific community at large with the discovery of the mRNA technology.

"We are not alone in developing the science," Sahin told DW. "So I think the whole scientific community is a superhero."

Mutation is "a normal part of virus evolution," Mike Ryan, emergencies chief of the World Health Organization (WHO), told an online briefing on Monday.

"There's zero evidence that there's any increase in severity'' of COVID-19 from the variant, he said, referring to the mutation of the spike protein that the virus uses to attach to and infect cells. The spike is what vaccines and antibody drugs target.

Being able to track the vaccine rollouts and "a virus this closely" without time delay was a very advantageous development for global public health, said Ryan.

WHO chief scientist Soumya Swaminathan said none of the variants "has made a significant impact on either the susceptibility of the virus to any of the currently used therapeutics, drugs or the vaccines under development."

How justified are vaccine concerns?