The biggest Polish shopping market for Germans along the border hasn't lost any of its pull for hundreds of thousands of people since it opened in the early 1990s. DW's Hardy Graupner joined a busload of eager shoppers. 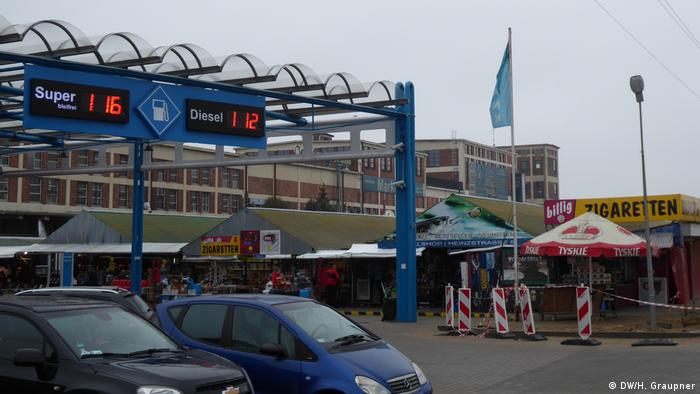 It's a little past 9 a.m. on a freezing cold and rainy December morning on the outskirts of Berlin. It's not exactly the kind of weather for spending a lot of time outside voluntarily, but those waiting for a shuttle bus here in the district of Ahrensfelde are willing to do exactly that.

The coach is already coming round the bend, with its final destination unambiguously written right across its side — Polenmarkt. It means "Polish market" in German, the term most Germans use when describing any of the bazaars that have sprung up in Poland after the collapse of communism to serve thrifty German shoppers from the border regions.

The joint German-Polish border is some 450 kilometers (280 miles) long, and such Polish bazaars are not really rare. But the one my fellow travelers are going to today stands out on many counts. It's by far the biggest of them all, located across the Oder river, right across from the German village of Hohenwutzen. About an hour later, a bridge across the Oder is the only thing left separating excited German shoppers and industrious Polish vendors on the other side.

The travelers on average spend about three hours hunting for bargains, with price differentials still considerable as Poland — unlike Germany — has shown no hurry in adopting the euro currency and stuck to its own zloty. And there've been no more regular border checks since Poland joined Europe's Schengen Agreement toward the end of 2007.

"The bus shuttle service is really great," says a German woman. "I'm here to buy shoes and clothes — stylish clothes that the Poles have on offer and at the same time inexpensive clothes," she adds. "It's good to get some cheap stuff here, especially if you don't earn that much at home."

Upon arrival, the market greets us with gaudy signs and billboards meant to lure German visitors with all sorts of bargains. There's no lack of stands brimming over with goods. "It's like a whole town of its own, complete with the entire infrastructure you'd expect in such a place," the managing director of the shopping precinct, Nicolas Gesch, tells DW.

"We've got a huge team looking after anything from electricity supply, heating in winter, garbage disposal and security services, and that's quite a job," he adds. "After all, we're talking about an area as big as 50 soccer fields."

This vast area was actually the site of a former German pulp and paper mill, with the region belonging to Germany before World War II. Settlements there were almost completely destroyed in a 1945 end-of-war battle between advancing Soviet soldiers and German paratroopers, but the mill survived as if by magic.

After the war, the factory buildings were stripped of basically all equipment and machinery by the Soviets, who needed it badly to revive their own economy that had been crippled by Germany's invasion.

The compound, which now belongs to Poland, was left to rot away for decades. It wasn't until after German reunification in 1990 that the place slowly but surely developed into the biggest Polish bazaar for German shoppers. 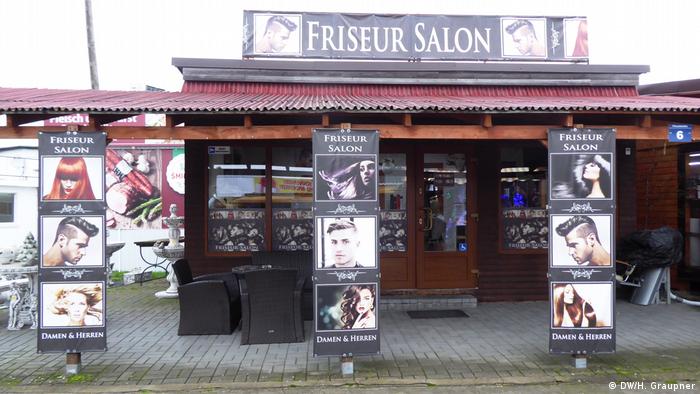 If Germans are after a really cheap and yet professional haircut, then the bazaar is the place for them

Not that many of the present-day shoppers are aware of the place's history, despite some huge industrial ruins on the bazaar compound providing some historical clues for those interested.

But that's not what most have come here for. They want to make sure that the two-way €10 ($11.13) ride to the market is worth every cent.

"It's definitely good to be here," says a young German shopper. "I've already bought cigarettes and some Polish meat — you can find lots of other bargains if you've got the time, but I don't want to spend the whole day here today as it's too cold," he adds.

"When the weather is better, I most certainly take the time to go to one of those lovely restaurants here to try some fine and genuine Polish food such as buraki soup [beetroot soup] or golonka [salted pork leg, ham hock]."

Getting hairy? Not really

"I've seen many times that the German men buy meat and cheese, while their wives go to the hairdresser," a Polish vendor says, and a German woman standing nearby nods in agreement. 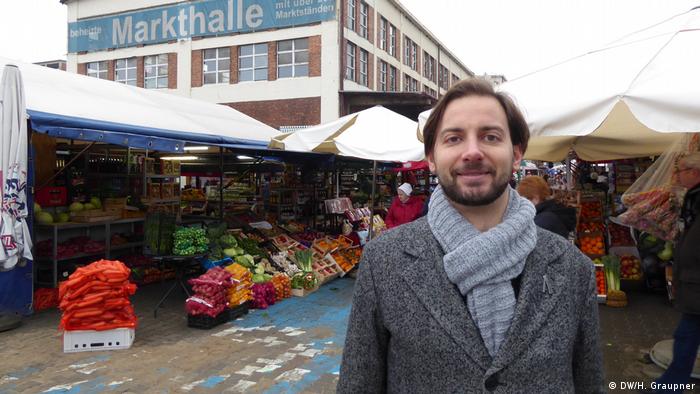 "In Germany, I'd have to pay some €50 at least for the haircut I want, and here I can get it done for under €20." "True, true," another one adds, "and there's usually no waiting time — it's your turn the moment you go in. It's so cheap, so clients like me are happy and keep returning," she notes.

Cheap cigarettes, haircuts and above all cheap gasoline represent the corner points of the triangle that many Germans can easily get caught in here at the bazaar, CEO Nicolas Gesch agrees. While the bus shuttle service is popular with many, most Germans bring their cars.

"In the winter period, we register about 100,000 cars per month here, while in summer it can easily be between 150,000 and 180,000 per month, and that also tells you something about the total number of visitors annually," Gesch says. It's big business, although overall turnover figures are not known.

"It doesn't make much sense to ask the 700 or so Polish vendors about their actual sales figures," he adds with a twinkle in his eyes. 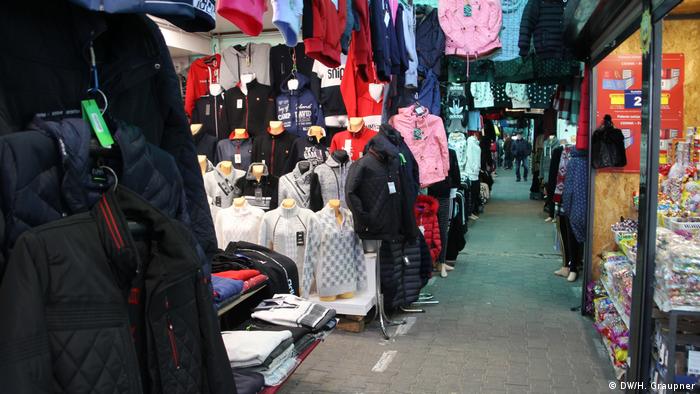 Clothes galore at the bazaar, and never a dull moment as vendors love to talk to you without being obtrusive

Gesch is confident that the attractiveness of the bazaar will not go away anytime soon. And he's making plans to add some new elements. "There's no doubt that our German visitors like the shopping experience they have here, especially when bearing in mind that they can also sometimes buy stuff that they wouldn't get at home, such as knockoff clothes and more powerful firecrackers for their New Year parties."

But that's not where it ends," he emphasizes. "We've already added a camping site to the compound, and there are plans for a marina of our own to serve the needs of boaters."

"In addition, we'll be offering more services at the bazaar and are also looking into establishing a flea and peddlers' market for secondhand items to promote the concept of sustainability."

So, German shoppers may soon have even more reasons to return to the bazaar. It's a win-win situation for both them and the vendors as long as Poland doesn't adopt the euro currency, but talks about that happening anytime soon have long died down.